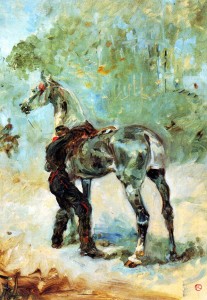 Visited Toulouse-Lautrec country last week: Albi on the Tarn River in South of France.
In his early days, before moving to the flesh pots of Montmatre in Paris, TL painted some fine military subjects, clearly from the local ‘Quartiers de Cavallerie et d’Artillerie’: Chasseurs à Cheval and Gunners.
Interesting that TL was painting military figures in the terrible years immediately after the defeat of France in the Franco-Prussian War of 1870. 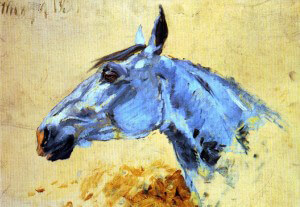 Head of a grey horse by Henri de Toulouse-Lautrec 1882.

Starting in his greatly disabled childhood, TL developed a considerable talent for painting horses, before turning to the absinthe-soaked dancing girls and battered roués of Paris and Bordeaux. 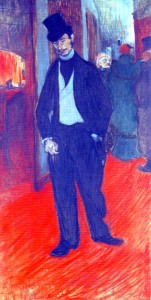