The following battles of the 100 Years War are described and illustrated under this title: 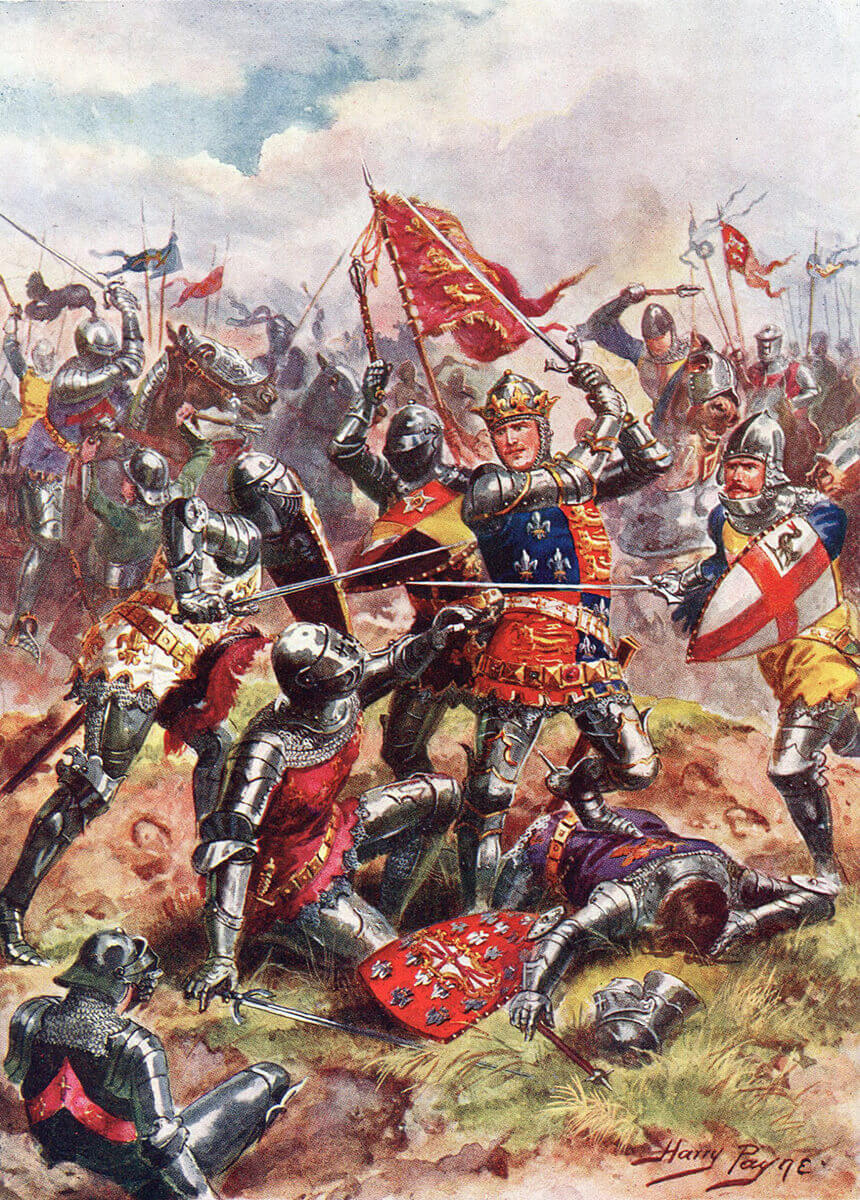 King Henry V at the Battle of Agincourt on 25th October 1415 in the Hundred Years War: picture by Harry Payne

Battle of Sluys:  The naval engagement on 24th June 1340 that marked the beginning of the Hundred Years War and established England in its succession of victories under Edward III.

Battle of Morlaix: The first land battle between the English and the French of the Hundred Years War fought in Brittany on 30th September 1342.

Battle of Auberoche: The battle in Périgord in France fought on 21st October 1345 during the Hundred Years War where a small English/Gascon army defeated a French army six times its size.

Battle of Creçy: King Edward III’s crushing English victory over the French on 26th August 1346; the Black Prince winning his spurs and acquiring the emblem of the Three White Feathers.

Battle of Neville’s Cross: The crushing defeat on 17th October 1346 of David II, son of Robert the Bruce and King of Scotland, whose capture and the loss of several of Scotland’s military leaders left Scotland helpless for many years.

Battle of La Roche-Derrien: The savage fight between the English force of Sir Thomas Dagworth and the Breton/French army of Charles of Blois outside the besieged Breton town of La Roche-Derrien on 20th June 1347 in the Hundred Years War

Battle of Poitiers:  The Black Prince’s great victory on 19th September 1356 over the French King John.

Battle of Otterburn: The Scots general, the Earl of Douglas’s defeat of his long standing English rival, Sir Henry ‘Hotspur’ Percy, Earl of Northumberland, on the England/Scotland Border in the summer of 1388.

Battle of Homildon Hill: The border battle of 1402 in which the Scots lost a generation of chiefs to the English archers.

Battle of Shrewsbury:  The savage battle on 21st July 1403 that abruptly ended Harry Hotspur’s attempt to wrest the throne of England from King Henry IV.