You are here: Home / Anglo-French Wars in India / Siege of Arcot 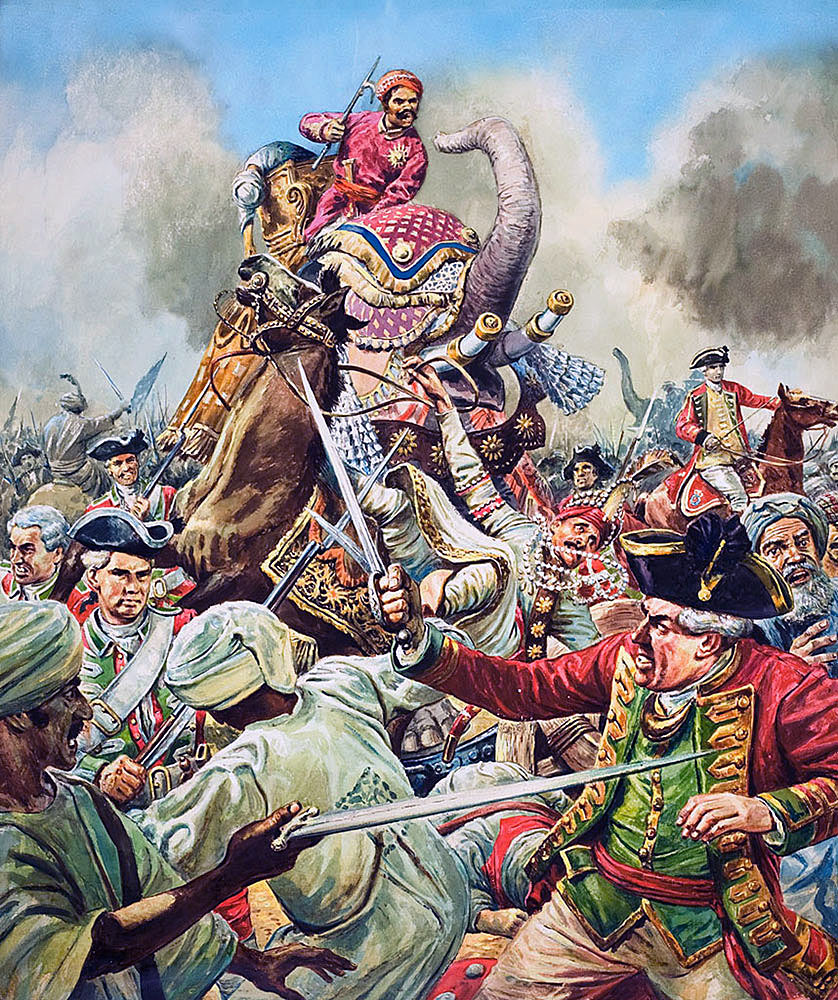 Siege of Arcot 31st August to 15th November 1751 in the War in India: picture by Cecil Doughty

To the Anglo-French War in India index

Place of the Siege of Arcot: In South East India. 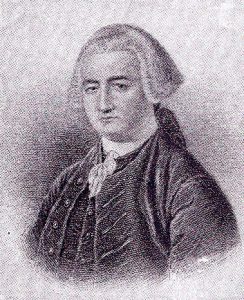 Robert Clive: Siege of Arcot 31st August to 15th November 1751 in the War in India

Generals at the Siege of Arcot: Raju Sahib, son of Chunda Sahib, against Robert Clive.

Size of the armies at the Siege of Arcot: The army of Raju Sahib comprised some 11,000 native troops and 150 French troops. Raju Sahib was supported by a train of French siege artillery. Clive’s force comprised 200 British and 300 Sepoy troops and 3 guns. He was able to use the guns he found in the abandoned fort at Arcot. The number of these pieces is unknown.

Winner of the Siege of Arcot: Robert Clive.

Uniforms, arms and equipment at the Siege of Arcot:
The various native rulers were able to put large armies into the field at short notice. These armies comprised indisciplined levies armed with bows, swords and spears. There were few firearms. A constant threat from North-West India were the Mahrattas, better disciplined mounted warriors.

The most significant component in India was the disciplined French and British infantry and artillery armed with muskets and field guns. There were few of these troops and, while effective in the field against the native levies, they were susceptible to disease and quickly became casualties.

The answer for the French and the British to the lack of European numbers and their vulnerability to tropical disease was to recruit native sepoys, arm them with muskets and train them in European battle drill. This both European nations began to do. For the British, their presence in India was primarily to trade and there was a reluctance to become involved in the raising, training and paying large bodies of troops, until it became clear that this was unavoidable if a presence was to be maintained in India in the face of French ambition and aggrandisement. 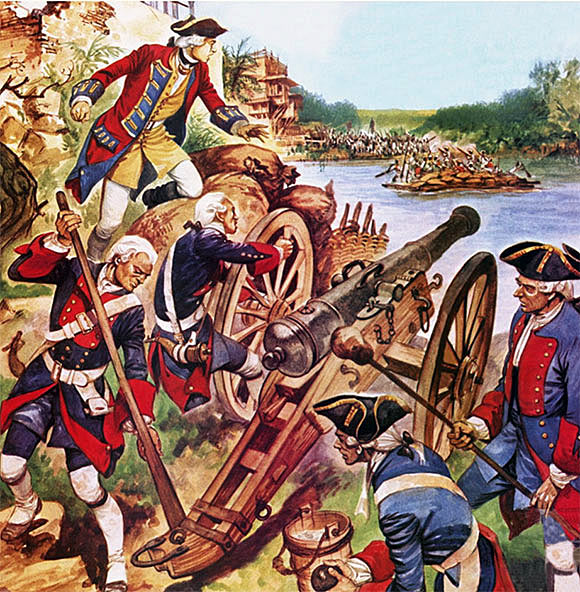 Robert Clive fires a cannon in the Siege of Arcot 31st August to 15th November 1751 in the War in India: picture by Cecil Doughty

As the French and British sepoy armies became stronger the two nations ceased to fight as proxies for local rulers and the fighting between them became direct, although the wars with the native rulers continued to be an important component of the politics of southern India, particularly as the French lost ground to the British.

Background to the Siege of Arcot:
The Siege of Arcot was among the first significant battles for the British in India. The predominant power on the Indian sub-continent was the Muslim Mogul Emperor in Delhi. The Emperor maintained a loose rule over a system of sub-rulers of varying power and loyalty. These rulers struggled over the suzerainty of a number of states of differing sizes. These struggles were particularly savage when a ruler died leaving family and retainers to fight over the succession. In the south of India, the native rulers turned to the two competing European powers, Britain and France, to assist in these struggles. 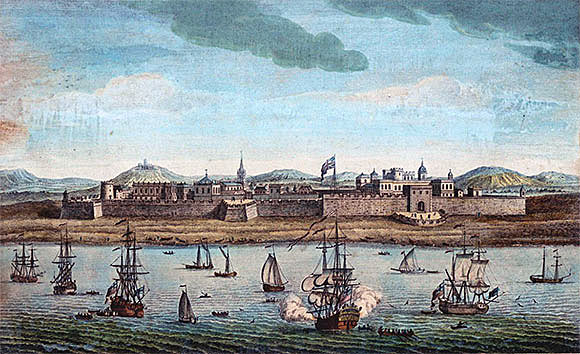 Fort St George in Madras: Siege of Arcot 31st August to 15th November 1751 in the War in India

Between 1748 and 1751, the French Governor Dupleix worked to build up French influence in the South of India.

The departure of Boscawen’s British fleet for England in the autumn of 1749 with the arrival of the monsoon lifted a major restraint on French ambition and the French quickly established control of the Deccan, much of the Carnatic and other states in Southern India.

In July 1751, Chunda Sahib, the Nawab of Arcot, with a force of 8,000 native and 400 French troops, advanced to lay siege to Trichinopoly, held by Mohammed Ali, the Nawab of Tanjore.

In February 1751, the British sent a force of 300 European and 300 Sepoy soldiers to assist Mohammed Ali in holding his capital of Trichinopoly. This force eventually was increased by a further 500 British and some African troops and 1,000 Sepoys, commanded by Captain Gingen assisted by Lieutenant Robert Clive.

Gingen attempted to intercept the advance of Chunda Sahib on Trichinopoly. Due to panic amongst his British troops Gingen was forced to withdraw into Trichinopoly, less Clive who returned to the coast, where he joined the garrison of 1,600 of Mohammed Ali’s army, described by Fortescue as a ‘rabble’. 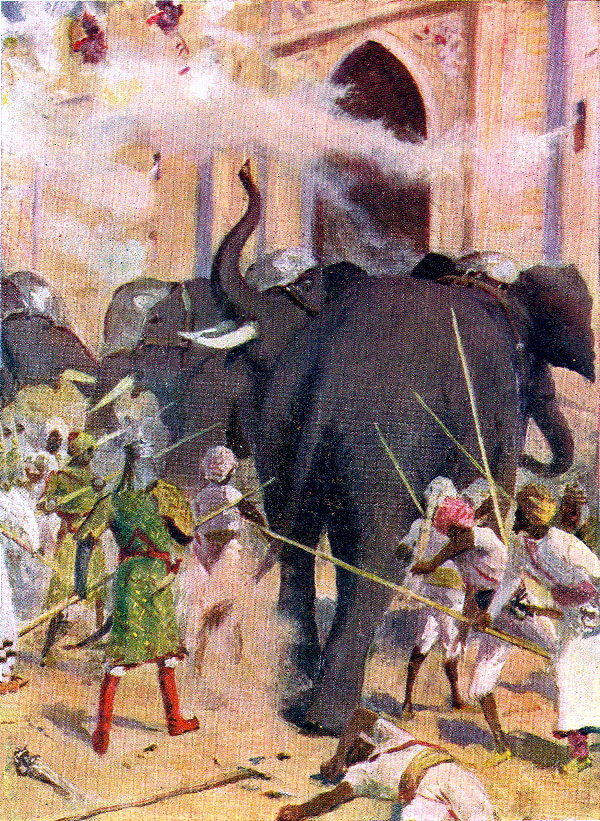 Elephants battering at the gates of Arcot Fort: Siege of Arcot 31st August to 15th November 1751 in the War in India

The main British presence in the area was at Fort St David on the coast. A small force of British troops arrived at Fort St David from Britain and from this force a reinforcement was dispatched to Trichinopoly under Mr. Pigot and Robert Clive.

A further force was inserted into Trichinopoly by Clive, who formed the view that the only way to alleviate the disastrous position the British were now in, with almost all their European troops and all their military officers shut up in Trichonopoly, was to carry out a diversionary attack. Clive’s plan was to attack Arcot, Chunda Sahib’s capital to the north of Trichinopoly.

Clive travelled up the coast to Madras, and put his plan to the British Governor, Robert Saunders. Saunders immediately agreed to the expedition, putting Clive in command of a force of 200 British troops and 300 Sepoys with 3 guns, almost all the force available in Madras and Fort St David. Clive was given 8 officers, of whom 4 were civilian clerks, taken from the East India Company Madras office for the expedition. 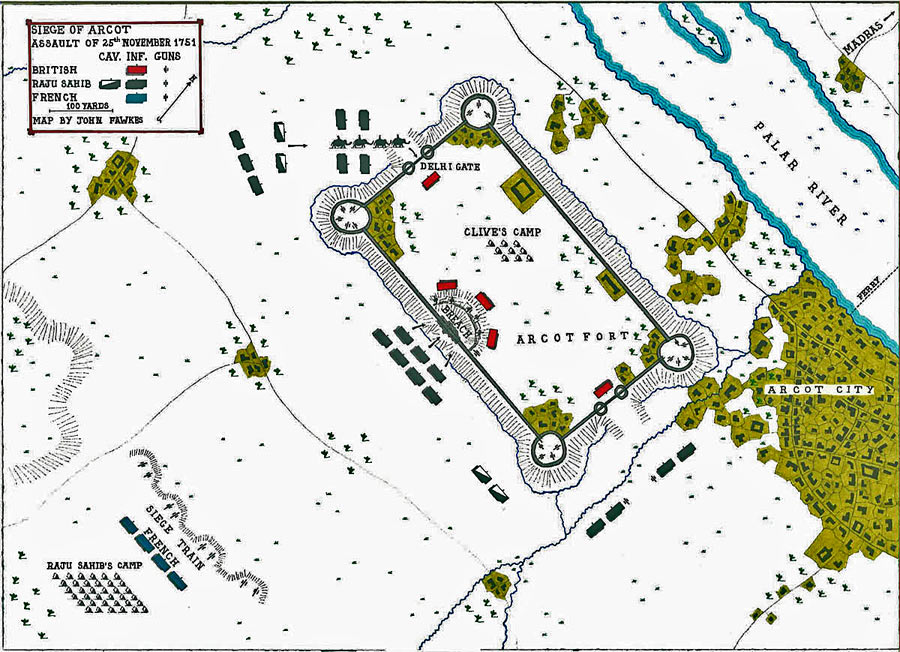 Map of Siege of Arcot 31st August to 15th November 1751 in the War in India: map by John Fawkes

Account of the Siege of Arcot:
Robert Clive marched out of Madras on 26th August 1751 for the 65 mile journey to Arcot, crossing the River Paliar at Conjeveram. After 5 days, Clive’s force was 10 miles short of Arcot.

Clive’s information was that Arcot was unfortified, with a dilapidated fort containing a garrison of 1,000 native soldiers.

Clive began his final approach march in a heavy thunderstorm. News that the British were advancing in spite of the terrible weather seems to have weighed heavily with the Arcot garrison, which abandoned the fort and left the town.

Clive’s men took over the fort and began work to put it in a state of defence, mounting the guns left by the fleeing garrison on the battlements. 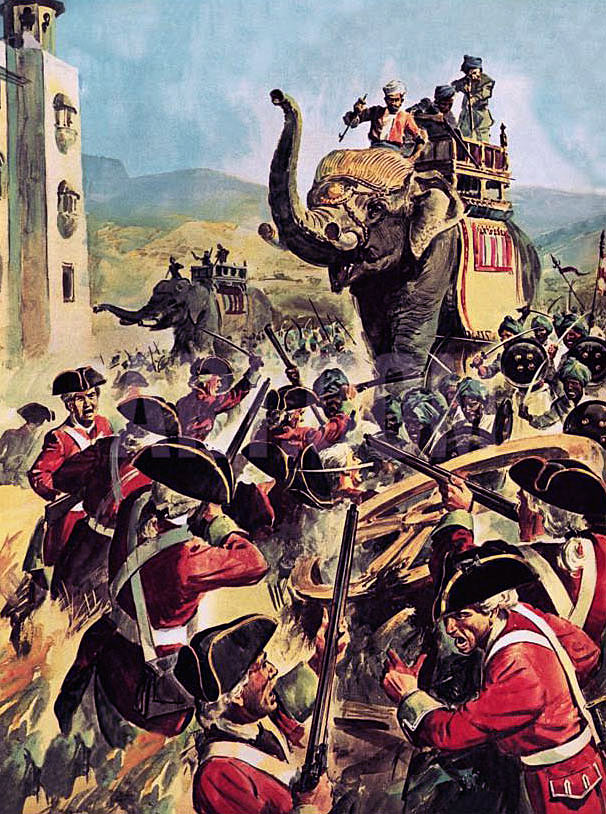 Elephants advancing on the gates of Arcot Fort: Siege of Arcot 31st August to 15th November 1751 in the War in India

Informed by his scouts that the garrison was encamped some 6 miles from the town, where they were receiving reinforcements, Clive mounted a series of successful attacks which resulted in the garrison dispersing into the countryside.

As Clive anticipated, the news that his capital had been captured by the enemy was of greater immediate concern to Chunda Sahib than taking Trichinopoly.

Chunda Sahib dispatched his son, Raju Sahib, with a force of 4,000 native soldiers and 100 French troops, reluctantly provided by Dupleix, to retake Arcot.

Raju Sahib arrived at Arcot on 23rd September 1751, and invested the fort. 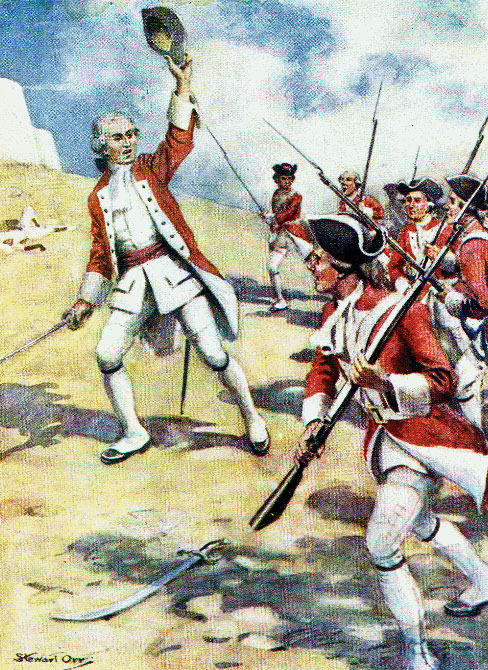 Clive leading the assault on the besiegers: Siege of Arcot 31st August to 15th November 1751 in the War in India

Ever aggressive, on 24th September 1751 Clive launched an attack on his besiegers. Clive’s force was driven back into the fort with the loss of 2 officers and 31 European soldiers killed and wounded, a heavy cost in view of his limited numbers.

Within two weeks heavy guns arrived for Raju Sahib’s assault on the fort and he began a bombardment. By 30th October 1751 a practicable breach had been blown in the walls of the fort. In compliance with convention, Raju Sahib invited Clive to surrender, but received a reply of ‘contemptuous defiance’. Raju Sahib hesitated to put his troops to an assault and waited to see if the garrison might be starved into surrender. 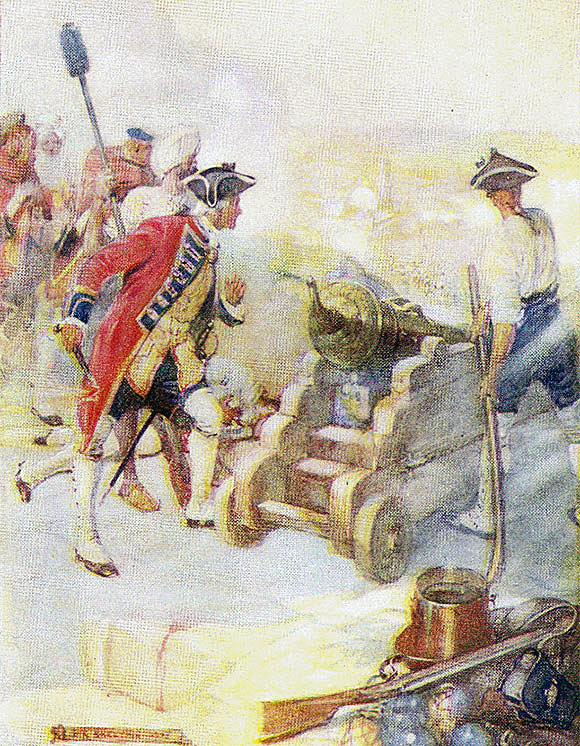 In Madras, Governor Saunders was organising a relief of Arcot. Saunders completed his negotiations with the Mahratta chief, Morari Rao, whereby the Mahrattas joined the British. A force of British troops and sepoys with Mahratta cavalry prepared to march to Arcot.

News of this relief forced Raju Sahib’s hand and an assault was planned on the 13th November 1751 for the next day, the Muslim fast of Hassan and Hussein.

Clive’s intelligence system warned him of the plan and preparations were made. The attack would inevitably be focused on the breach made by the siege train’s bombardment. Cannon were positioned to cover the breach and relays of surplus muskets were loaded and stacked to enable the troops positioned at the breach to maintain a constant fire. 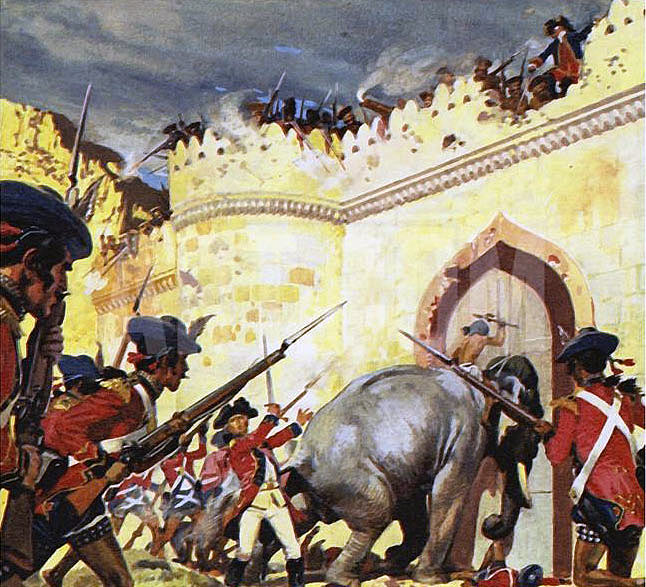 Elephants battering at the gates of Arcot Fort: Siege of Arcot 31st August to 15th November 1751 in the War in India

At dawn on 14th November 1751, Raju Sahib’s troops swarmed forward for the escalade of the breach. At the same time an assault was launched on the fort’s Delhi Gate. Elephants were used, their heads fitted with armoured plates in an attempt to batter in the gate.

The elephants were subjected to heavy musket fire and, maddened by their injuries, the animals turned on the accompanying soldiers and trampled to death everyone within reach.

The storming party was equally unsuccessful in the breach. The British fire was so heavy that the attacking troops were unable to make any headway. At one point Clive took personal charge of a gun, the crew being struck down, and fired several rounds into the attackers.

The assault was only maintained for an hour, after which Raju Sahib’s men melted back into the town. The French troops took no part in the attack on the fort, probably because Dupleix considered the operation a diversion from the more important business of capturing Trichinopoly and did not wish to lose any of his valuable European troops.

The next day, Raju Sahib marched away with his army, leaving several of his guns and much of his ammunition for Clive to capture. 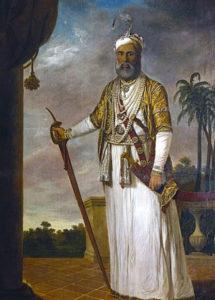 Nawab of Arcot: Siege of Arcot 31st August to 15th November 1751 in the War in India: picture by Tilly Kettle

Casualties at the Siege of Arcot:
Casualties during the final assault were said to have been 6 of the garrison killed and wounded, while Raju Sahib lost 400 men.

The whole siege was said to have cost Clive’s force a quarter of its strength in killed alone. Total casualties for Raju Sahib’s army are unknown.

Battle Honour and Campaign Medal for the Siege of Arcot:
The Battle Honour of ‘Arcot’ was given to the Madras European Regiment, which became the Honourable East India Company’s Madras European Regiment in 1830.  In 1862, after the Indian Mutiny, the regiment was taken into Crown service as the 102nd (Royal Madras Fusiliers) Regiment.  In 1881 the 102nd, with the 103rd (Royal Bombay Fusiliers) Regiment, became the Royal Dublin Fusiliers which retained ‘Arcot’ as a Battle Honour, the only regiment in the British or Indian Armies to carry the honour.

There is no campaign medal.

Follow-up to the Siege of Arcot: the immediate result of the success of the siege for Clive was that he was enabled to follow up Raju Sahib’s army and defeat it again in open battle at Arni. The pendulum then swung in favour of the French before Trichinopoly could be relieved.

Regimental anecdotes and traditions from the Siege of Arcot:

References for the Siege of Arcot:

History of the British Army by Fortescue Volume II

To the Anglo-French War in India index