You are here: Home / Second Afghan War / Battle of Charasiab

The knife-edged battle, fought on 6th October 1879 and won by the courage and resource of the British and Indian troops, that opened the way for Roberts to Kabul 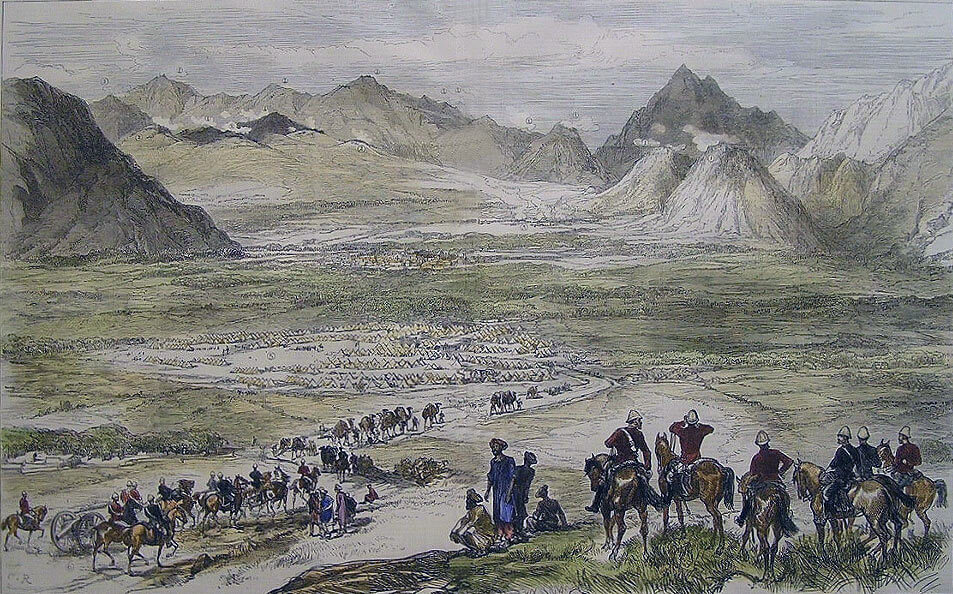 View of the Battle of Charasiab on 9th October 1879 in the Second Afghan War: the River Logar is beyond the mountains on the right 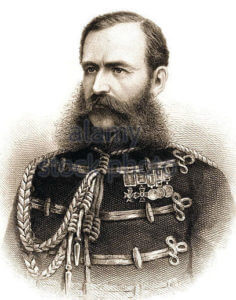 Date of the Battle of Charasiab: 6th October 1879

Place of the Battle of Charasiab: South of Kabul in Afghanistan.

Combatants at the Battle of Charasiab: British and Indians against Afghan troops and tribesmen.

Generals at the Battle of Charasiab: Major General Frederick Roberts VC against Nek Mohammed Khan, uncle of the Ameer and Governor of Kabul.

Size of the armies at the Battle of Charasiab: 3,800 British and Indian troops against 12,000 regular Afghan troops and tribesmen.

Uniforms, arms and equipment at the Battle of Charasiab:
The British and Indian forces were made up, predominantly, of native Indian regiments from the armies of the three British presidencies, Bengal, Bombay and Madras, with smaller regional forces, such as the Hyderabad contingent, and the newest, the powerful Punjab Frontier Force. 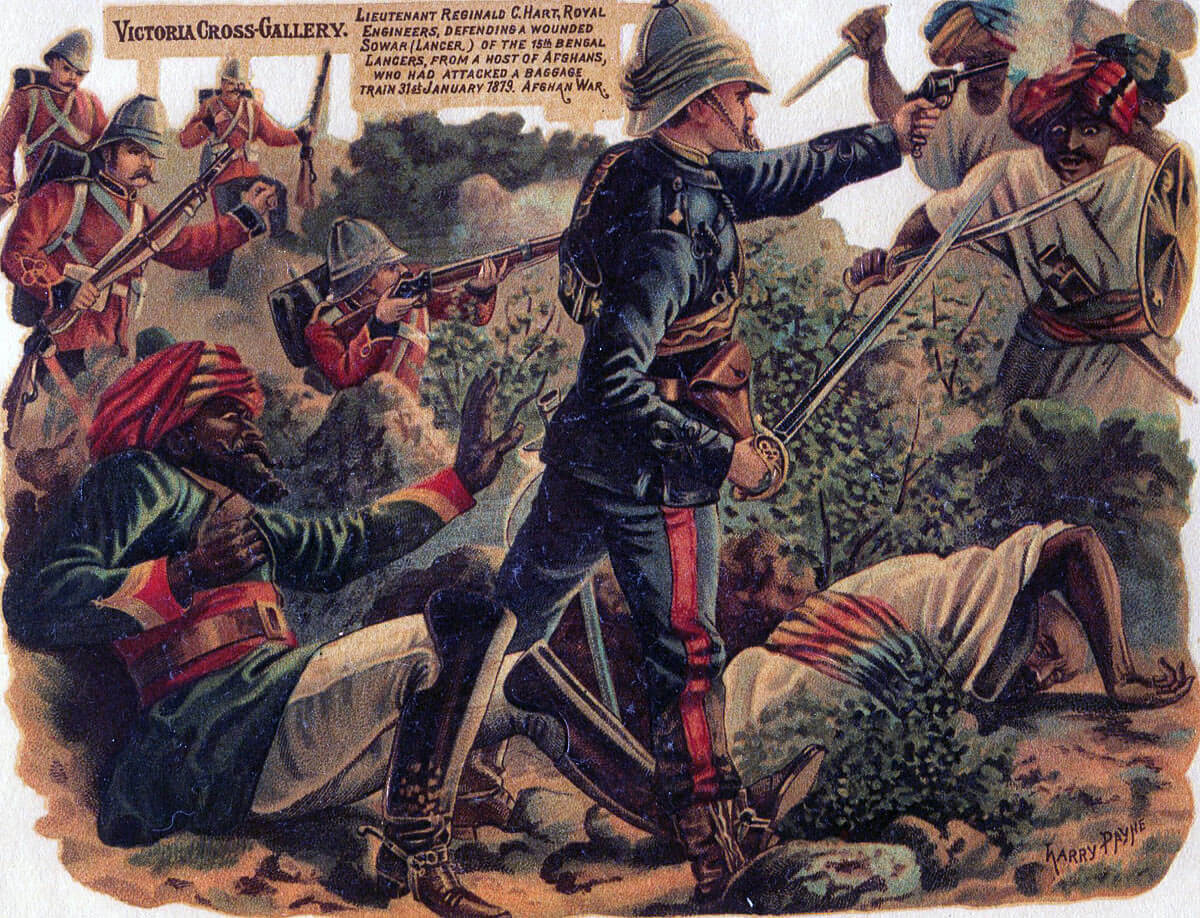 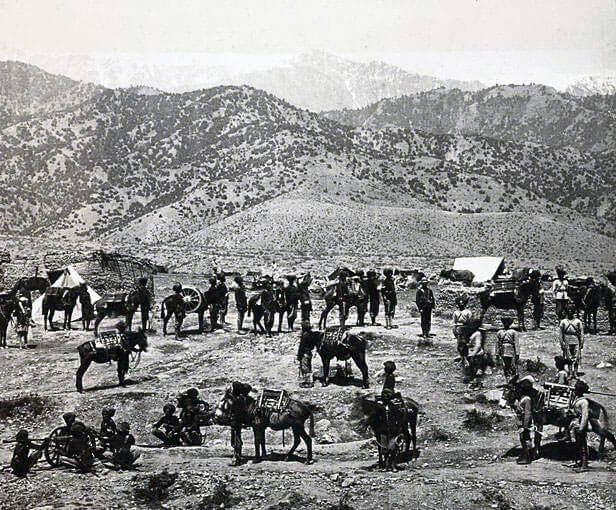 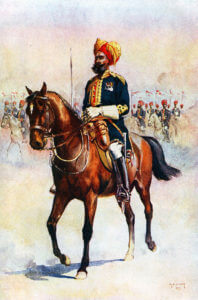 Winner of the Battle of Charasiab: The British and Indians. 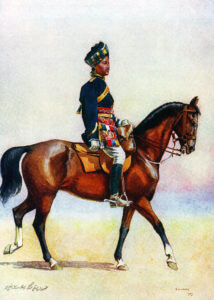 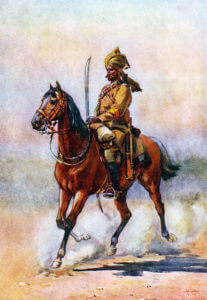 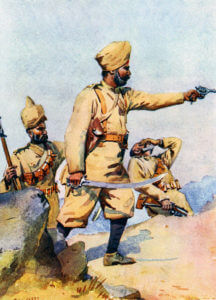 The Third and Fourth Brigades garrisoned the lines of communication. This was no easy task due to the frequent raids by the mountain tribes, with many of the troops so employed seeing as much action, if not more than the troops with the main force.

Account of the Battle of Charasiab:
On 3rd September 1879, Afghan troops from the Herati regiments rioted in Kabul, demanding their arrears of pay. The rioters went to the Bala Hissar fortress, where they stormed the residency occupied by the British Military Mission under Sir Louis Cavagnari and a small escort of Guides Cavalry. 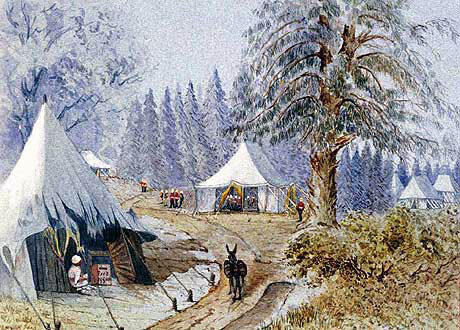 British encampment: Battle of Charasiab on 9th October 1879 in the Second Afghan War

After a bitter fight, the Herati troops killed Cavagnari and his British and Indian party, thereby rekindling the Second Afghan War.

The first phase of the war ended four months earlier with the signing of the Treaty of Gandamak in May 1879, the principle provision of which required the Afghan Ameer, Yakoub Khan, to accept Cavagnari’s mission in Kabul.

As the news of the deaths of Cavagnari’s party reached India, British and Indian regiments gathered in the border stations for the resumption of hostilities. 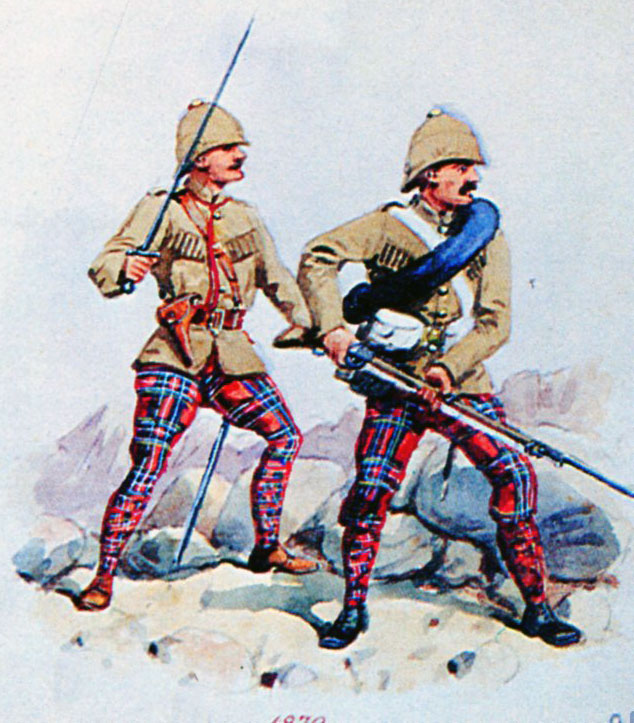 72nd Highlanders at the Battle of Charasiab on 9th October 1879 in the Second Afghan War: picture by Richard Simkin

While in the first phase, the British contented themselves with a limited incursion into Afghanistan to bring the Ameer to negotiations, the death of Cavagnari caused the government in Calcutta to initiate a full invasion of the country, the occupation of Kabul and punitive action against the killers of Cavagnari’s party.

This time, the advance was to be by the Kurrum Valley alone, the Khyber route being considered too difficult, with a strong invasion in the South of Afghanistan to take Kandahar, the Southern Afghan capital. Once Kabul was taken, the Khyber Pass route would be opened to establish supply lines with India. 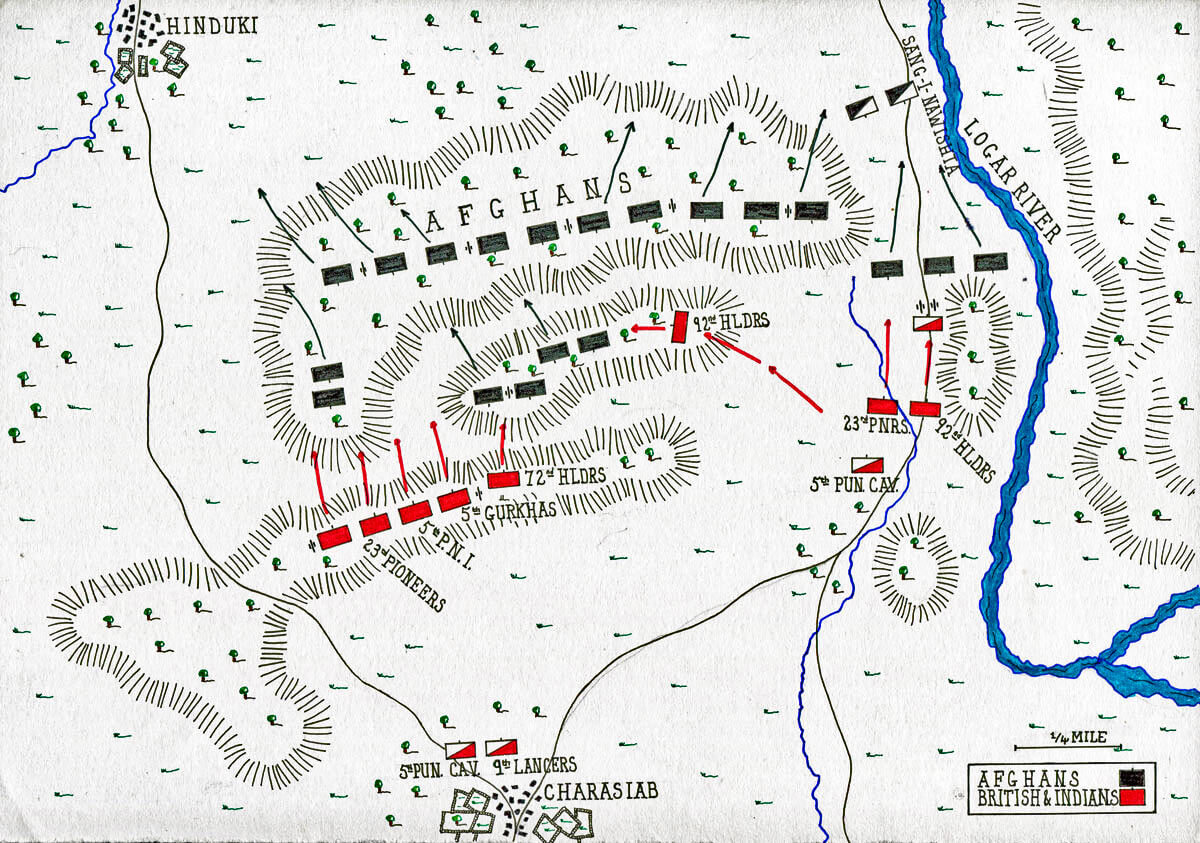 Map of the Battle of Charasiab on 9th October 1879 in the Second Afghan War: map by John Fawkes

Command of the northern attack on Kabul was given to Major General Sir Frederick Roberts, the commander of the Kurrum Valley Field Force in the first phase and the general considered to have performed best. 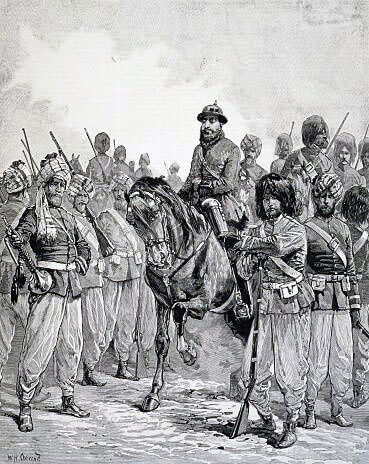 Afghan troops: Battle of Charasiab on 9th October 1879 in the Second Afghan War

Roberts reached Ali Khel near the head of the Kurrum Pass on 6th September 1879, to find the three brigades of the Kabul Field Force largely assembled and ready to cross the Shutagardan Pass into Central Afghanistan. Many of the mountain tribes were persuaded to desist from attacking the British supply columns, a move made easier by the Ramadan festival inhibiting tribal hostilities.

Yakoub Khan, finding that the murder of Cavagnari made his position as Ameer untenable, left Kabul and joined Roberts, enabling the British to claim that the invasion was to support the Ameer’s rule.

On 3rd October 1879, the Kabul Field Force began the final thirty-six mile march to Kabul.
As in the first phase of the war, the British and Indian force was severely hampered by a shortage of transport animals, camels and oxen. Brigade Macpherson remained at the town of Safed Sang, with a reserve of ammunition and stores, while Roberts and the main body continued to Kabul.

On the evening of 5th October 1879, Roberts reached Charasiab village near the River Logar and encamped. To the north of the camp, by the river, the route to Kabul lay through the Sang i Nawishta defile. Brigadier MacGregor urged that a hill overlooking the defile be immediately occupied, but this was not done. It was Roberts’ intention to remain in Charasiab while the transport animals returned to Safed Sang and brought up the supplies left there with the remaining troops.

As evening drew in, Afghans could be seen gathering in the hills flanking the Sang i Nawishta.

On the morning of 6th October 1879, a force comprising 23rd Bengal Native Infantry and 92nd Highlanders with cavalry and 2 guns advanced to the Sang i Nawishta, with the task of making sure the route along the Logar River was passable. But the Afghan force was now moving forward and it could be seen that this was not a mass of tribesmen, but regular Afghan troops equipped with artillery, around 8,000 in number. The Afghans took position occupying three miles of the crescent of hills.

To further complicate Roberts’ position, Afghan tribesmen were gathering in his rear and cutting his links with Macpherson’s force. Roberts resolved on immediate attack on the Afghan army blocking his road to Kabul. 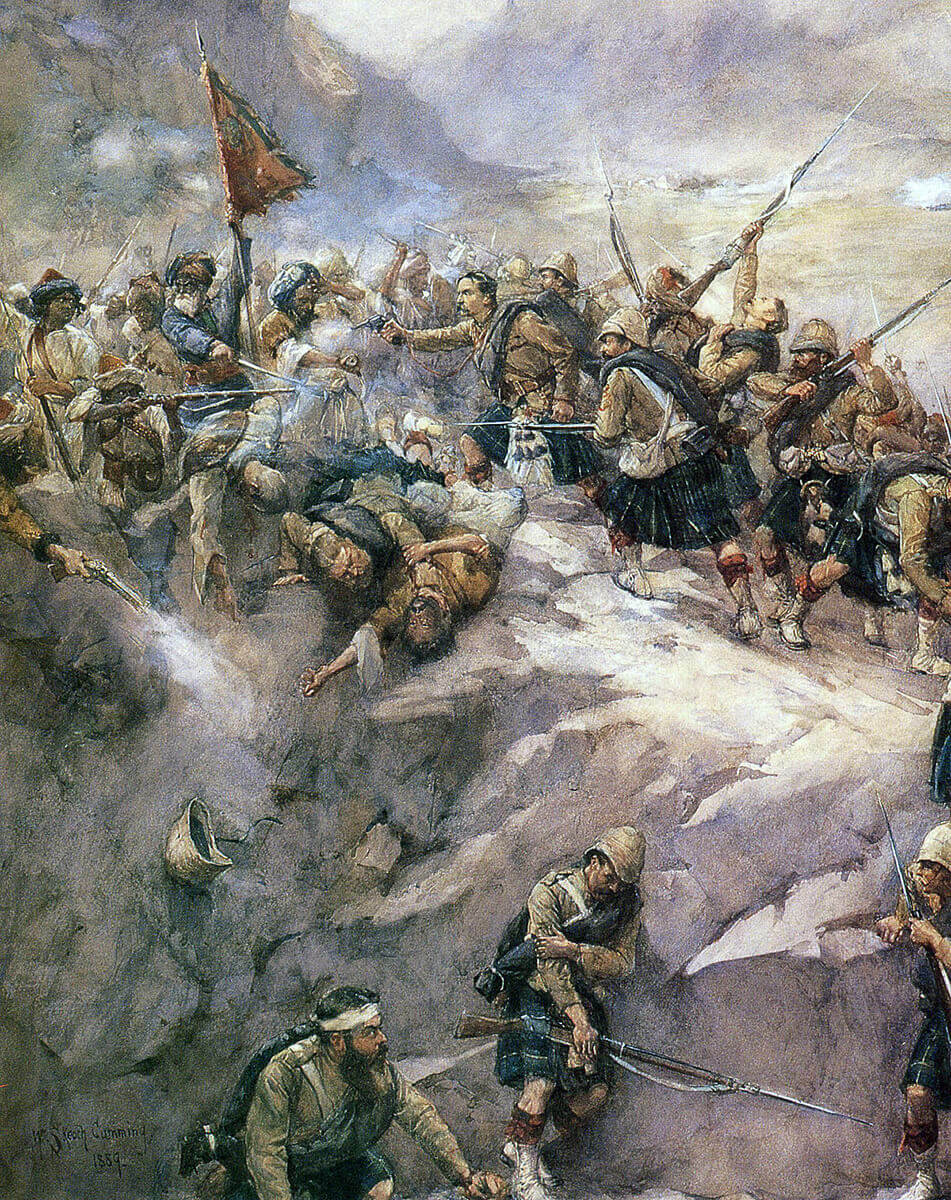 Baker’s force divided in two; Major White leading a contingent from the 92nd and 23rd Pioneers into the defile, while Baker took the remaining companies to attack the Afghan right.

White stormed the hill overlooking the defile, only to find himself threatened by overwhelming numbers of Afghans. In spite of this, White detached two companies of highlanders to assist Baker’s attack. 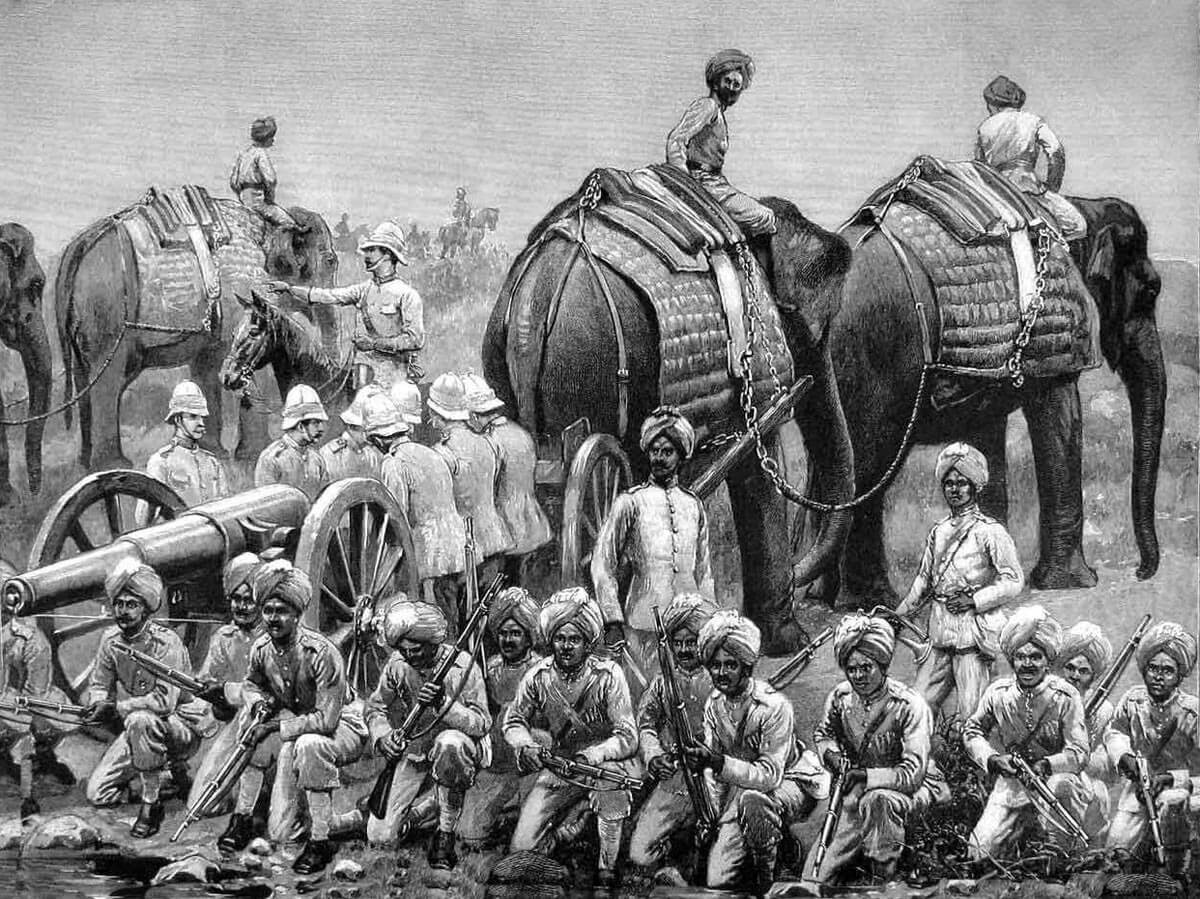 Baker’s troops stormed the hills forming the first line on the Afghan right, driving the Afghans back to the second line of hills. The 72nd, 5th Gurkhas and the remaining companies of the 23rd Pioneers assailed the second line. This attack was suddenly supported by the two companies of 92nd Highlanders, sent with great perspicacity by White to launch an assault in support of Baker on the left flank of the Afghans. 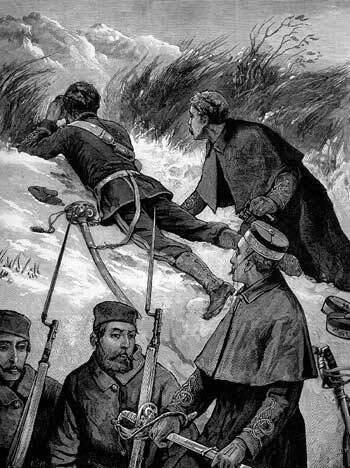 Looking out for Afghans: Battle of Charasiab on 9th October 1879 in the Second Afghan War

The Afghan centre and right, under attack by Baker and in flank by the 92nd, crumbled and fled, taking the troops facing White with them, pressed as they were by White’s advance up the defile. White’s cavalry captured 6 guns.

The battle at Charasiab was a critical one. As on several occasions in the Second Afghan War, the margin between success and disastrous failure was thin. The courage and resource of the troops and their officers won the battle against great odds. Roberts showed his remarkable tactical skill and ability to delegate, a confidence that was entirely justified in the case of vigorous and resourceful subordinate officers like White and Baker.

Anecdotes and traditions from the Battle of Charasiab: 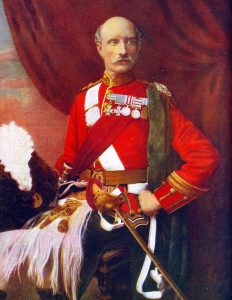 References for the Battle of Charasiab: