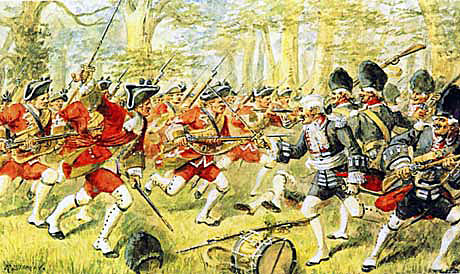 British 5th Foot at the Battle of Wilhelmstahl on 24th June 1762 in the Seven Years War: picture by Richard Simkin 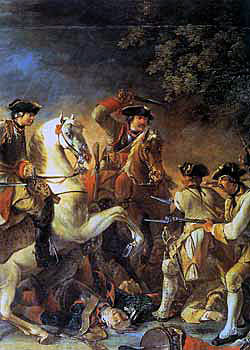 Date of the Battle of Wilhelmstahl: 24th June 1762

Place of the Battle of Wilhelmstahl: North West Germany

Combatants at the Battle of Wilhelmstahl: British, Hanoverians, Prussians, Brunswickers and Hessians against the French.

Commanders at the Battle of Wilhelmstahl: Archduke Ferdinand of Brunswick against Prince Soubise and the Duc D’Estrées.

Size of the armies at the Battle of Wilhelmstahl: Ferdinand’s army comprised 50,000 men against 70,000 French troops.

Uniforms, arms and equipment at the Battle of Wilhelmstahl:
All regular European soldiers of this time fought in a knee length uniform coat, turned back at the skirt, cuffs and lapels to reveal a distinctive regimental lining colour.

Headgear was a black tricorne hat with a lace brim, except for grenadiers who wore a tall mitre cap. In some armies the grenadier mitre was giving way to a bearskin cap.

The uniform was white for the majority of French regiments, blue for the Prussians and German armies that followed the Prussian tradition, like Hesse-Darmstadt, and red for the British and Hanoverians. There were exceptions within every army. The French Royal Household troops wore a variety of coats. The foreign mercenary regiments in the French service wore red. The Hanoverian and Hessen horse wore white. The British Royal Artillery and Royal Horse Guards wore blue coats.

Winner of the Battle of Wilhelmstahl: The allied army under Prince Ferdinand.

Grenadier of the 5th Regiment: Battle of Wilhelmstahl on 24th June 1762 in the Seven Years War: picture by David Morier

Account of the Battle of Wilhelmstahl:
1762 saw a complete change in the conduct of the Seven Years War. The new British Government under the Earl of Bute did not share Pitt’s enthusiasm for British involvement in the war in Germany. The policy of supporting Prussia came under review, with the possibility of a British-French peace treaty. 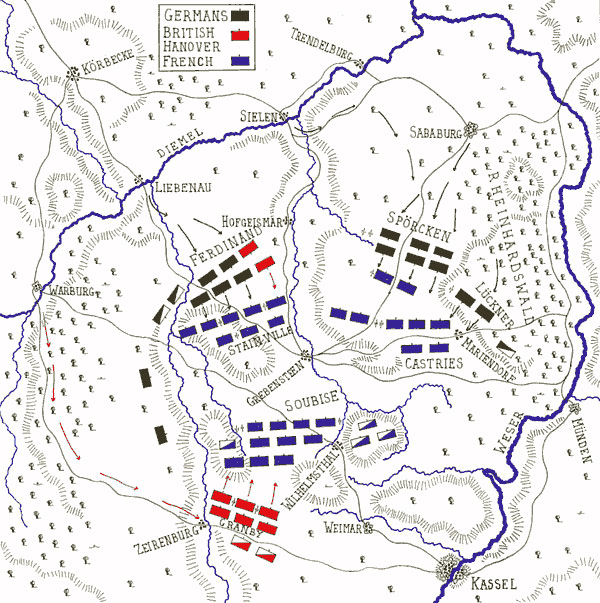 Map of the Battle of Wilhelmstahl on 24th June 1762 in the Seven Years War: map by John Fawkes

Prussia had been brought to its knees by the weight of the alliance against it; the Prussian army reduced to 70,000 men by its attritional battle casualties. Then on 5th January 1762 the Czarina Elizabeth, Frederick the Great’s sworn enemy, died. The new Czar made peace with Prussia. The tide swung in his favour, in the nick of time. 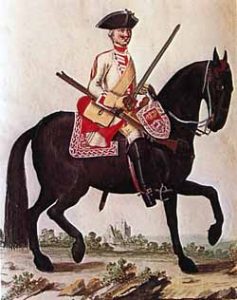 Ferdinand, Archduke of Brunswick, the allied commander in chief in North West Germany was perplexed as to the future of his British troops. Reinforcements for his British regiments were slow in arriving from England. His British generals lingered in London after the winter.

Nevertheless Ferdinand was determined to be first in the field and to take the initiative with the strongest army he had yet commanded.

A force under Lückner was dispatched to capture the fortress of Sababurg on 21st June 1762.

The French commanders Soubise and D’Estrées moved forward to occupy the area around the towns of Grebenstein, Burguffeln, Meimbressen and Wilhelmstahl. Lieutenant General the Marquis de Castries lay in an advanced position on the hills behind Carlsdorf. Stainville commanded a strong force on high ground by Westuffeln. Ferdinand resolved to attack the French army with an enveloping movement launched from across the River Diemel. 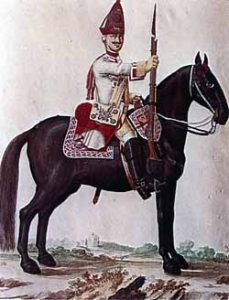 The Hanoverian general Spörcken, after crossing the river, would attack the force commanded by Castries. Lückner was to take his light troops around the French flank and deliver an assault on the French rear.

Several allied columns were to attack the main advanced French force under Stainville.

To Granby fell the role of advancing from Warburg, the scene of his triumphant cavalry attack in 1760, and take the French in the right rear.

On the night of 23rd June 1762 the allied columns crossed the Diemel and moved forward to the attack. In the first engagement, Spörcken’s force of Hanoverian foot and cavalry engaged Castries’ positions. The French artillery opened fire alerting the rest of the French army to the allied assault. In spite of being surprised, Castries counter attacked and was able to extract his force and pull back on the main army.

Lückner threw his attack in to the left of Spörcken’s. There was some confusion with regiments of the two columns firing on each other. The criticism is made that Lückner failed to swing far enough out and therefore did not come in on the French rear as intended. 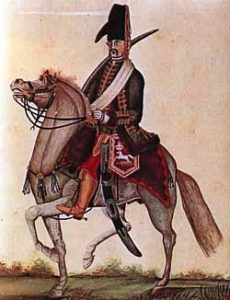 The main attack then fell on Stainville’s troops. They stood at the top of the hill; good regiments, confident of repelling any assault. But the first attack came from Granby’s column arriving in its rear. Stainville’s corps faced about and fought hard to drive the British and Hanoverian troops back down the hill. As each allied battalion came up it joined in the fighting, highlanders, grenadiers and the battalions of British Foot Guards. Finally Ferdinand’s main columns arrived and assaulted Stainville from the other direction. Attacked in the front and rear Stainville’s regiments broke. The Grenadiers de France and the Royal Regiment surrendered. Stainville managed to fight his way out with the remnants of his force, just two battalions, and the French army streamed away towards Kassel and the River Fulda.

Casualties at the Battle of Wilhelmstahl:
The allies suffered a total of 702 casualties of which 552 were suffered by Granby’s column. The French casualties are not clear. It seems that Stainville’s corps alone suffered 1,500 killed and wounded with 3,000 captured. 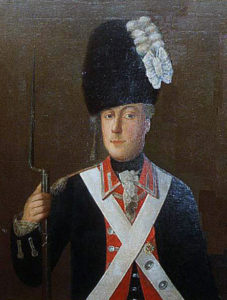 Officer of the Grenadiers de France: Battle of Wilhelmstahl on 24th June 1762 in the Seven Years War

Follow-up to the Battle of Wilhelmstahl:
The French army was forced to withdraw across the River Fulda. French offensive plans for the war were effectively at an end.

Anecdotes and traditions from the Battle of Wilhelmstahl:
Among the French regiments to surrender were the Grenadiers de France, the Royal Grenadiers and the Regiment d’Aquitaine. The 5th Foot took the surrender of many of these men. This may be the reason why the 5th alone was given Wilhelmstahl as a battle honour.

References for the Battle of Wilhelmstahl:
His Britannic Majesty’s Army in Germany during the Seven Year War by Savory