The British victory over the French on 14th July 1760, the 15th Light Dragoons making their name 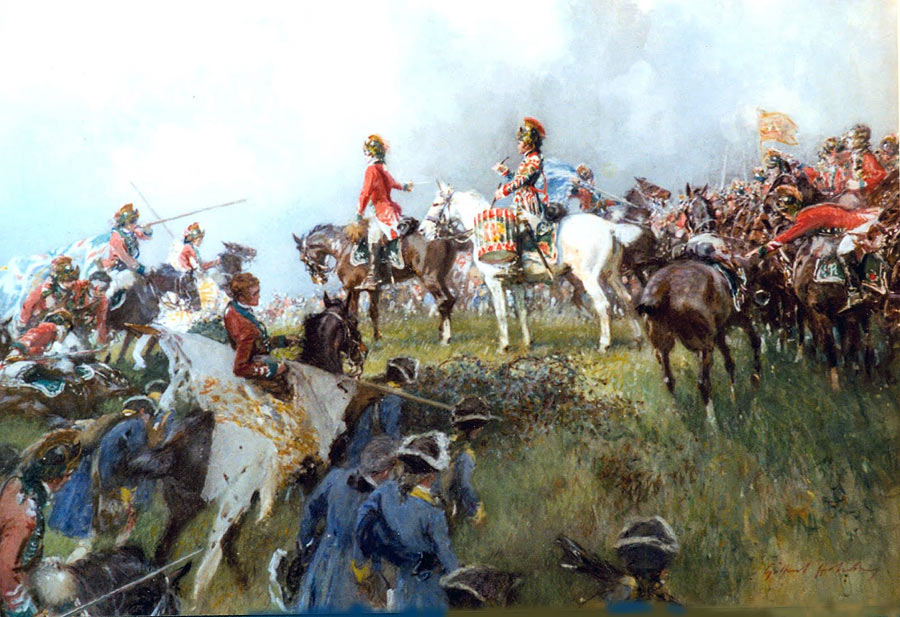 Place of the Battle of Emsdorf: Central West Germany in modern Hessia

Combatants at the Battle of Emsdorf:
Six battalions of Hanoverian and Hessian infantry, some irregular cavalry under Luckner, jägers and the newly raised British 15th Light Dragoons. The French units were five battalions of the Royal Bavière and the Anhalt regiments, German mercenaries, and a regiment of hussars, which at that time would have been recruited from Hungary.

Commanders at the Battle of Emsdorf:
The Erbprinz of Hesse-Kassel against Marechal de Camp Glaubitz.

Size of the armies at the Battle of Emsdorf: The two forces were roughly the same size at around 3,000 men.

Uniforms, arms and equipment at the Battle of Emsdorf:
All regular European soldiers of this time fought in a knee length uniform coat, turned back at the skirt, cuffs and lapels to reveal a distinctive regimental lining colour. Headgear was a black tricorne hat with a lace brim, except for grenadiers who wore a tall mitre cap. The uniform was white for the majority of French regiments but the foreign infantry regiments in the French service wore red coats or, as in the case of the German regiments at Emsdorf, dark blue. The troops of Hesse-Darmstadt followed the Prussian tradition and wore blue. The British and Hanoverians wore red. The light dragoon regiments were a departure for the British army, wearing a standard red dragoon uniform coat, but with a novel Roman-style crested leather skull cap. 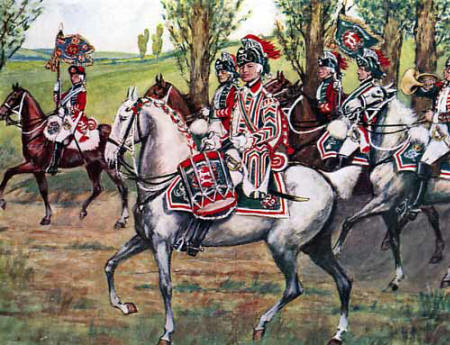 Winner of the Battle of Emsdorf: Resoundingly the Erbprinz’s force.

British Regiments at the Battle of Emsdorf:
The 15th Light Dragoons: later the 15th King’s Royal Hussars, then the 15th/19th King’s Royal Hussars and now the Light Dragoons. The 15th, only recently formed, had seen no action as a regiment. Its colonel was Augustus Elliott, subsequently to gain a considerable reputation as the governor of Gibraltar during the siege in the American War of Independence. Many of the recruits to the 15th are said to have been tailors, on strike when the regiment was being raised. 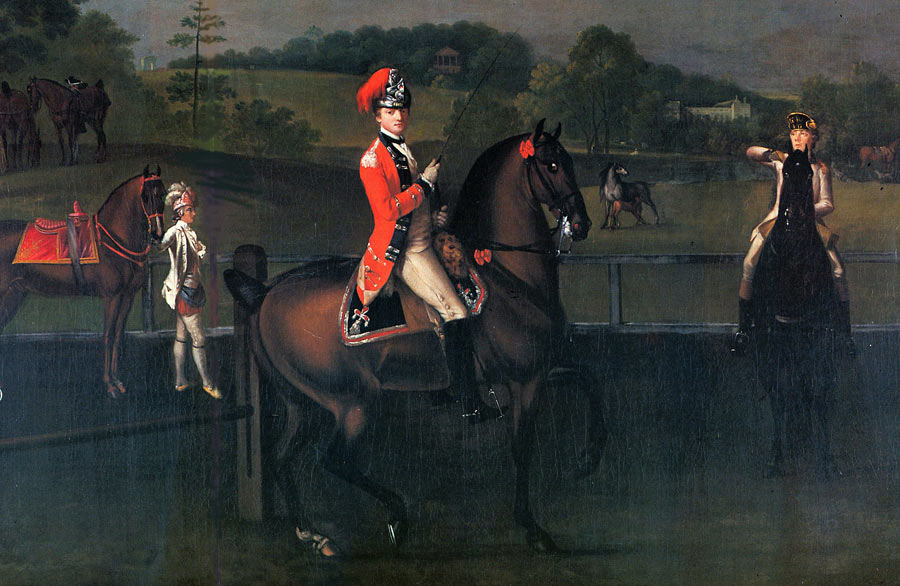 Captain Floyd of the 15th Light Dragoons: Battle of Emsdorf on 14th July 1760 in the Seven Years War

Account of the Battle of Emsdorf:
Prince Ferdinand’s army with 66,000 men was seriously threatened in North West German by the Duc de Broglie’s army of the Rhine with 130,000 men. Broglie threatened to envelope Ferdinand’s right flank and to cut him off from Westphalia. Rather than fall back across the Diemel, Ferdinand decided to raid Broglie’s rear depot at Marberg in the hope that this would force Broglie to withdraw to cover his line of communication. 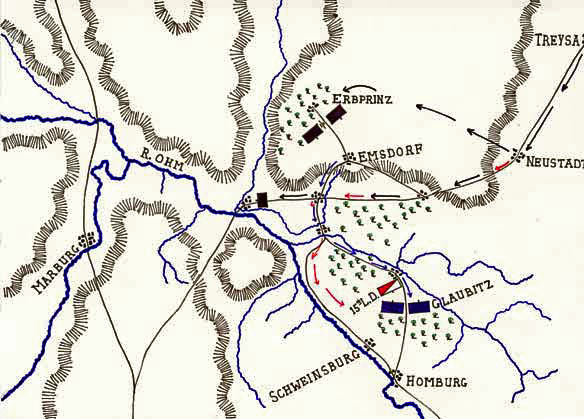 Map of the Battle of Emsdorf on 14th July 1760 in the Seven Years War: map by John Fawkes

The Erbprinz assembled his force at Fritzlar and set off towards Marburg on 15th July 1760 in hot weather. The next day the Erbprinz arrived at Speckswinckel where he received information that Glaubitz was in the next town, Emsdorf. The Erbprinz personally reconnoitred the enemy and found that they were about to eat their midday meal, entirely unsuspecting that there were enemy anywhere nearby. 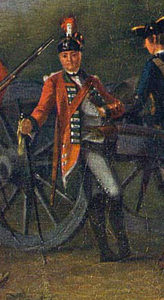 Officer of the 15th Light Dragoons: Battle of Emsdorf on 14th July 1760 in the Seven Years War

The Erbprinz with five of his battalions and the jägers marched round the enemy in Emsdorf to Burgholz and attacked out of the woods from the rear. Glaubitz led his men out of Emsdorf to the attack.

As soon as the firing started the 15th Light Dragoons advanced rapidly down the main road to Langenstein cutting Glaubitz off from his base at Marburg. Finding his way blocked Glaubitz headed across country to Niederklein further to the South, abandoning his guns in the difficult terrain on the way. As they emerged from the woods at Plausdorf the French troops were charged by the 15th Light Dragoons who captured some prisoners.

The remainder of Glaubitz’ force continued into the trees heading South. The 15th circled the wood and attacked again suffering considerable loss. The surviving French infantry headed for the next forest. The 15th formed again for the charge and Glaubitz surrendered his men to the officer commanding the 15th, Major Erskine. 1,655 men surrendered to the 15th Light Dragoons. 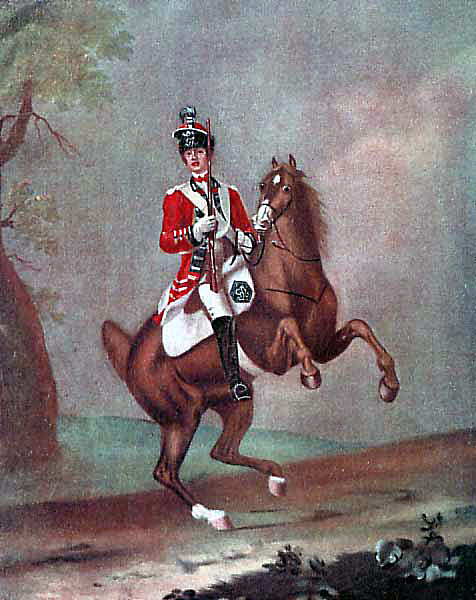 One of Glaubitz’s battalions had been sent back to Marburg at the beginning of the engagement so that it was highly likely that the town would be ready for any attack and probably reinforced, as was in fact the case. The Erbprinz withdrew to Fritzlar. 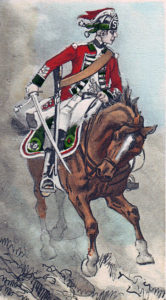 Anecdotes and traditions from the Battle of Emsdorf:

References for the Battle of Emsdorf: