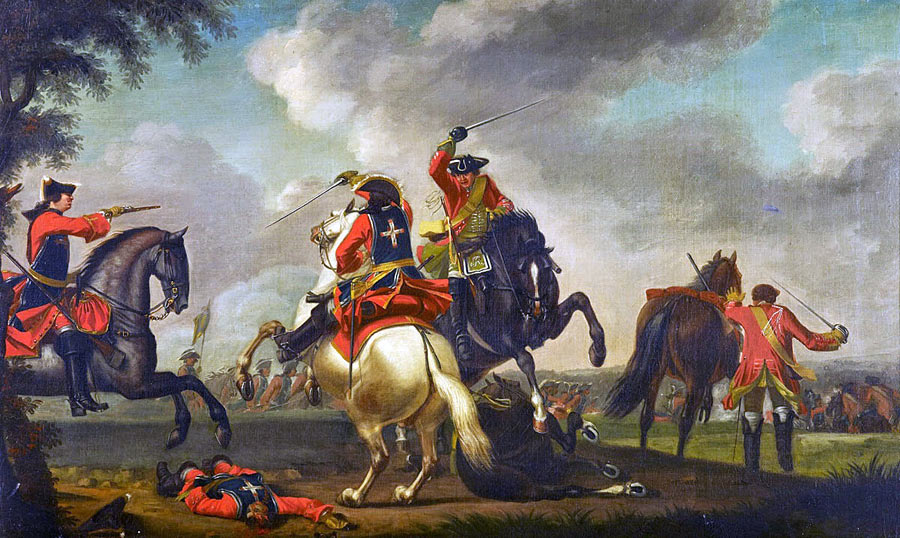 Place of the Battle of Warburg: North West Germany

Combatants at the Battle of Warburg:
A force of German, Hanoverian and British troops commanded by Prince Ferdinand of Brunswick and the Erbprinz (Hereditary Prince) of Hesse-Kassel, supported by the Marquess of Granby’s force of British cavalry, against a French force commanded by Lieutenant General Le Chevalier du Muy.

Generals at the Battle of Warburg:
Prince Ferdinand of Brunswick and the Erbprinz of Hesse-Kassel against Lieutenant General Le Chevalier du Muy. 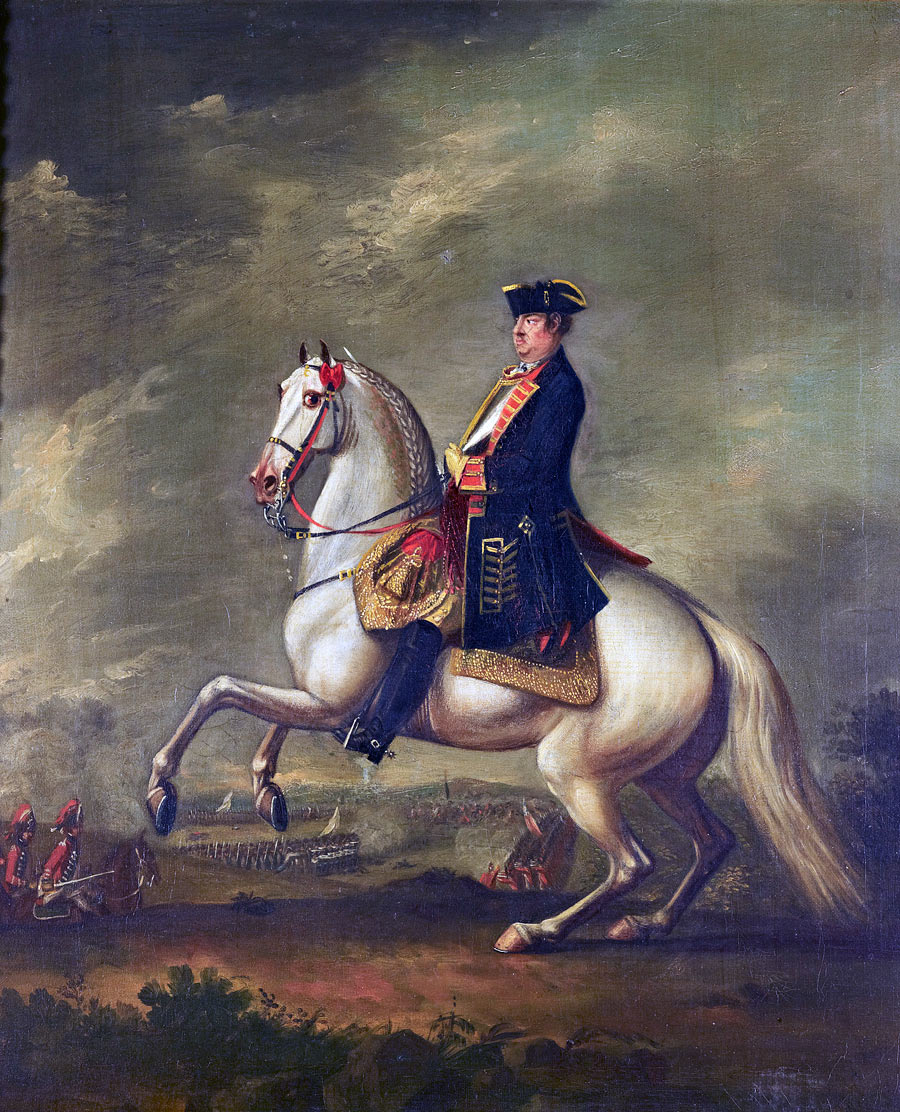 John Manners, Marquis of Granby at the Battle of Warburg on 31st July 1760 during the Seven Years War

Size of the armies at the Battle of Warburg:
Prince Ferdinand’s army numbered 62,000 while the Duc de Broglie’s army numbered 130,000. However the numbers directly in the battle were around 16,000 German and British troops while du Muy had around 20,000 men.

Uniforms, arms and equipment at the Battle of Warburg:
All regular European soldiers of this time fought in a knee length uniform coat, turned back at the skirt, cuffs and lapels to reveal a distinctive regimental lining colour. Headgear was a black tricorne hat with a lace brim, except for grenadiers who wore a tall mitre cap. In some armies the grenadier mitre was giving way to a bearskin cap. The uniform was white for the majority of French regiments, blue for the Prussians and German armies that followed the Prussian tradition, like Hesse-Darmstadt, and red for the British and Hanoverians. There were exceptions within every army. The French Royal Household troops wore a variety of coats. The foreign mercenary regiments in the French service wore red or dark blue. The Hanoverian and Hessen horse wore white. The British Royal Artillery and Royal Horse Guards wore blue coats. 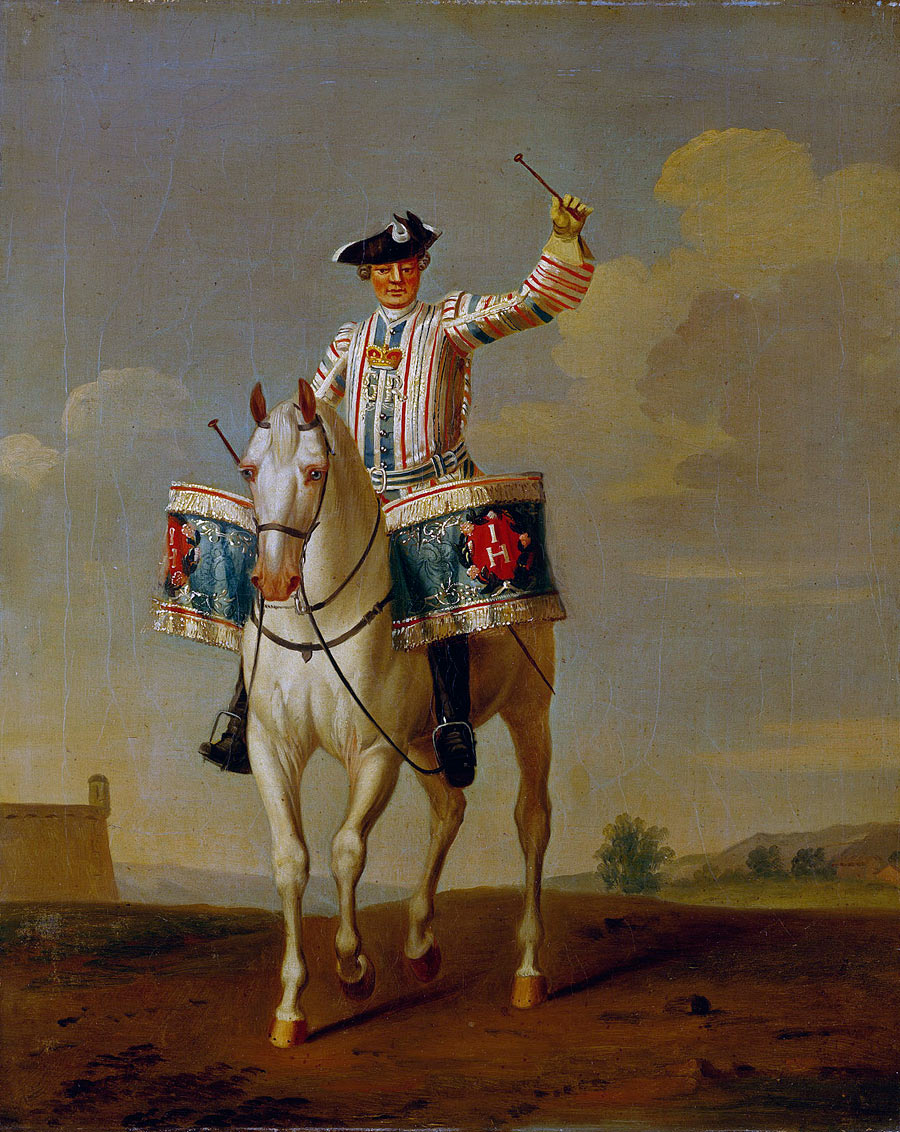 British Kettle Drummer of Horse: Battle of Warburg on 31st July 1760 during the Seven Years War: picture by David Morier

Winner of the Battle of Warburg: Prince Ferdinand with his German and British troops. 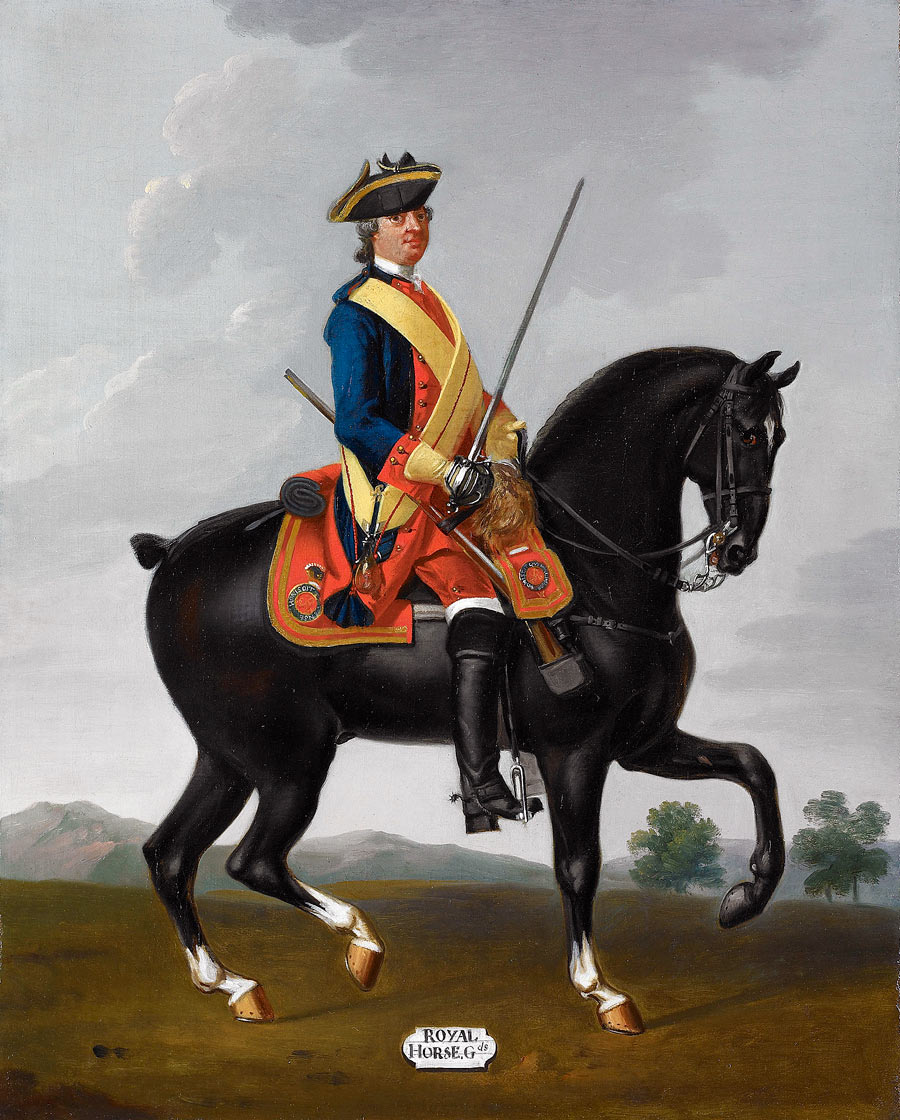 Royal Horse Guards, the ‘Blues’: Battle of Warburg on 31st July 1760 during the Seven Years War: picture by David Morier 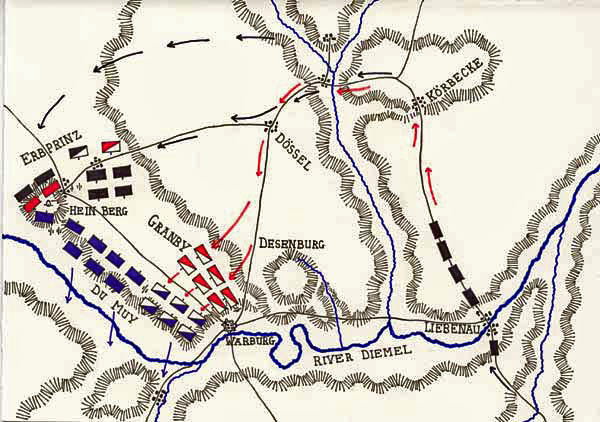 Map of the Battle of Warburg on 31st July 1760 during the Seven Years War: map by John Fawkes

Account of the Battle of Warburg:
In late July 1760 Prince Ferdinand with his Hanoverian, Hessian, British and Prussian troops was forced to retreat north before Broglie’s superior French army, into the triangular area between the Diemel and Weser Rivers. Kassel, lying on the left bank of the Weser, Ferdinand’s main base, was threatened.

Prince Ferdinand ordered a force into Kassel and withdrew the rest of his army into positions to the north of the city. On 27th July 1760 Ferdinand struck camp and moved west towards the Diemel, leaving the garrison in Kassel with orders to withdraw north to Münden if hard pressed.

Broglie saw the move and was concerned to stop Ferdinand crossing the Diemel. He ordered the Chevalier du Muy to cross the river at Marsberg and to march east along the north bank to Warburg. Broglie sent Fischer’s light troops to Warburg to seize the town and its bridges. Fischer occupied Warburg and posted troops on a hill east of the town called the Desenberg. 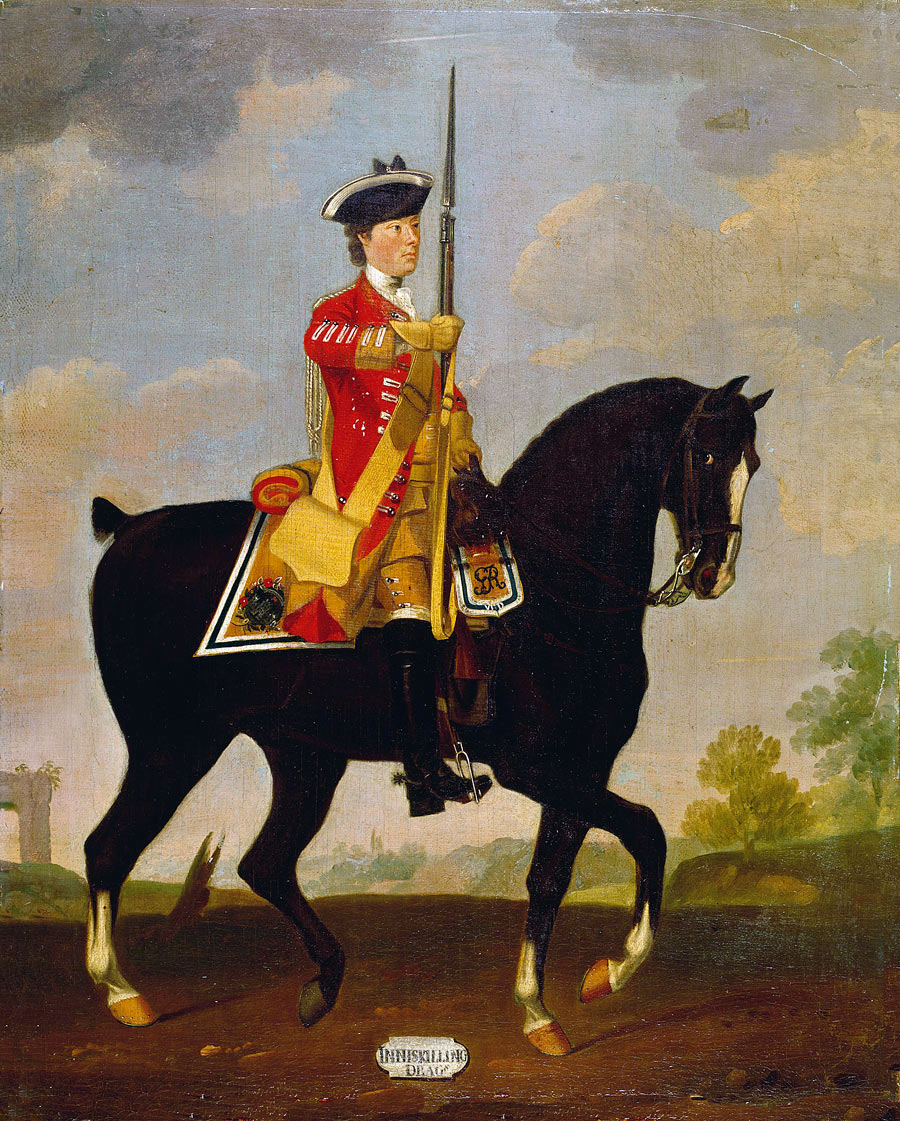 The Erbprinz and Spörcken concentrated at Köbecke to attack du Muy who had occupied a position to the North West of Wargrave parallel with the Diemel River.

On 30th July 1760, aware of the precariousness of his troops on the far side of the Diemel if Du Muy were reinforced, Ferdinand struck camp and marched for the river crossings.

Meanwhile the Erbprinz reconnoitred du Muy’s position and resolved to attack his force with a wide right flanking move in two columns.

Bülow’s British Legion occupied the Desenberg and demonstrated against du Muy’s front to keep him occupied while the rest of the Erbprinz’s troops executed a night march into its attack positions. The column commanded by Hardenberg would take a hill behind the French left flank called Hein Berg, topped by a tower, while Zastrow’s column, moving inside him, would attack the end of the French line. Ferdinand directed that the Erbprinz’s assault was not to begin until his main army had begun to cross the Diemel and could provide support. 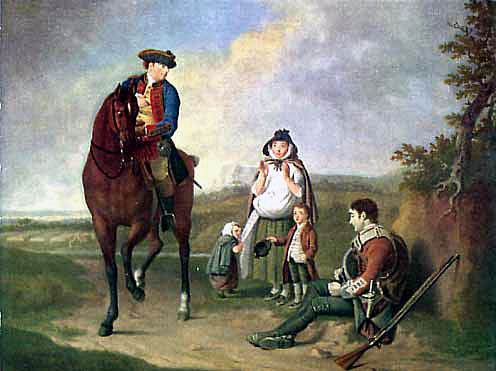 Marquess of Granby relieving a sick soldier: Battle of Warburg on 31st July 1760 during the Seven Years War

The 31st July 1760 dawned with a heavy mist preceding a hot day. At 7am Ferdinand, now present in the forward area, ordered the attack.

The battle began with the French capture of the Desenberg. Severely hampered by the mist, du Muy after some 2 hours made out Ferdinand’s army approaching from the Diemel crossing at Liebenau towards his right front.

Du Muy ordered his troops to form along the ridge behind which they had encamped.

Meanwhile the Erbprinz’s two columns were advancing through the mist behind du Muy’s left flank. At around midday the right column of British Grenadiers, Highlanders and 2 battalions of Hanoverian Grenadiers took the Hein Berg. Taken completely by surprise, Du Muy reacted with a heavy counter attack. Soon afterwards the Erbprinz’s left column launched its assault, taking the French in the rear and over running their guns. After heavy fighting the French line crumbled and was driven off the ridge by a charge from the British Royal Dragoons.

Du Muy’s 31 squadrons of cavalry on the right of his line had not been engaged, when they were attacked by a force of cavalry from their front. The Marquess of Granby and his British cavalry regiments had crossed the Diemel at Liebenau with Prince Ferdinand’s main army and force marched to reach the battle in time to support the Erbprinz. The infantry had been left toiling up behind them. The British regiments’ ferocious charge on the French cavalry caught them in the process of retiring, inflicted considerable loss and drove them across the river with the rest of du Muy’s force. 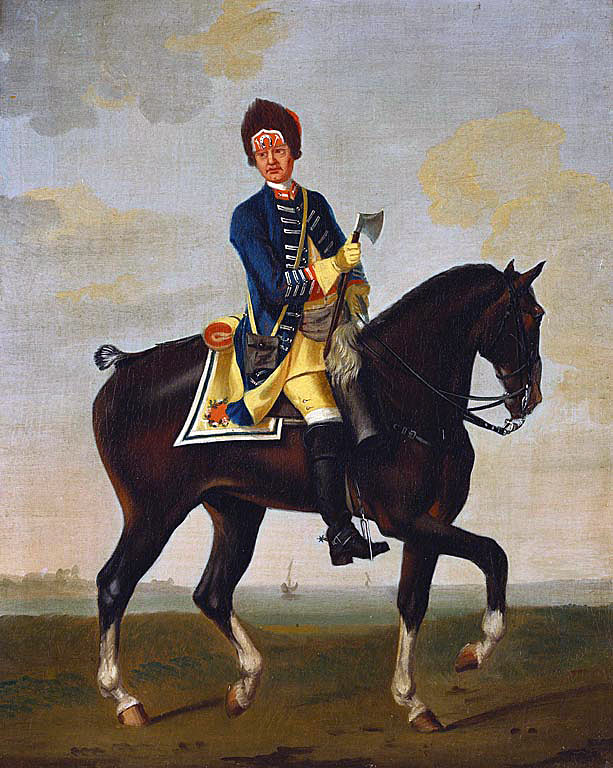 Granby pursued the French cavalry across the river but was forced to retire by the arrival of substantial reinforcements sent by Broglie.

Casualties at the Battle of Warburg:
The French are said to have suffered between 6,000 and 8,000 casualties and to have lost 12 guns. The Germans and British suffered 1,200 casualties of which 240 were from one of the British grenadier battalions. British cavalry losses are described as “trifling”.

Follow-up to the Battle of Warburg:
Although Warburg was a success, Broglie took advantage of the absence of Ferdinand’s army to take Kassel, a considerable blow to Ferdinand’s future campaign plans. 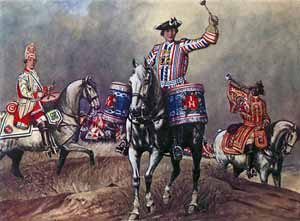 Regimental anecdotes and traditions of the Battle of Warburg:

References for the Battle of Warburg:
His Britannic Majesty’s Army in Germany during the Seven Year War by Savory