You are here: Home / Danish Wars / Battle of Ashdown 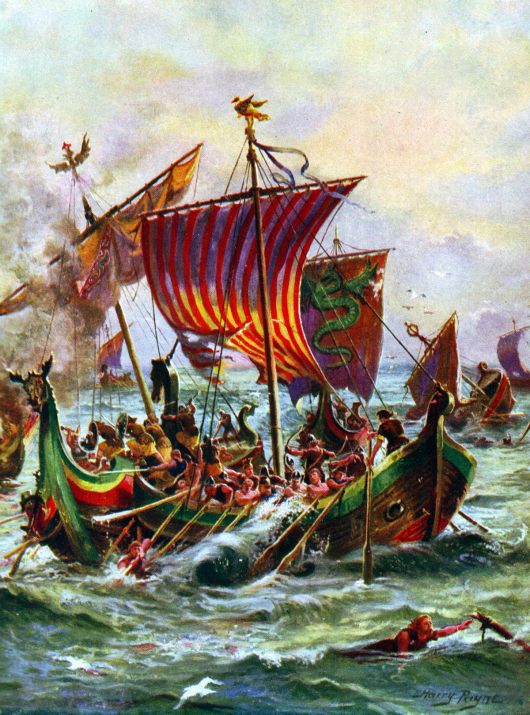 To the Danish Wars Index

The ‘Battle of Ashdown’ was written and contributed by David Young. See the note about David in the Battle of Medway.

Date of the Battle of Ashdown: 8th January 871 AD

Place of the Battle of Ashdown: North-West of Reading in Berkshire in England 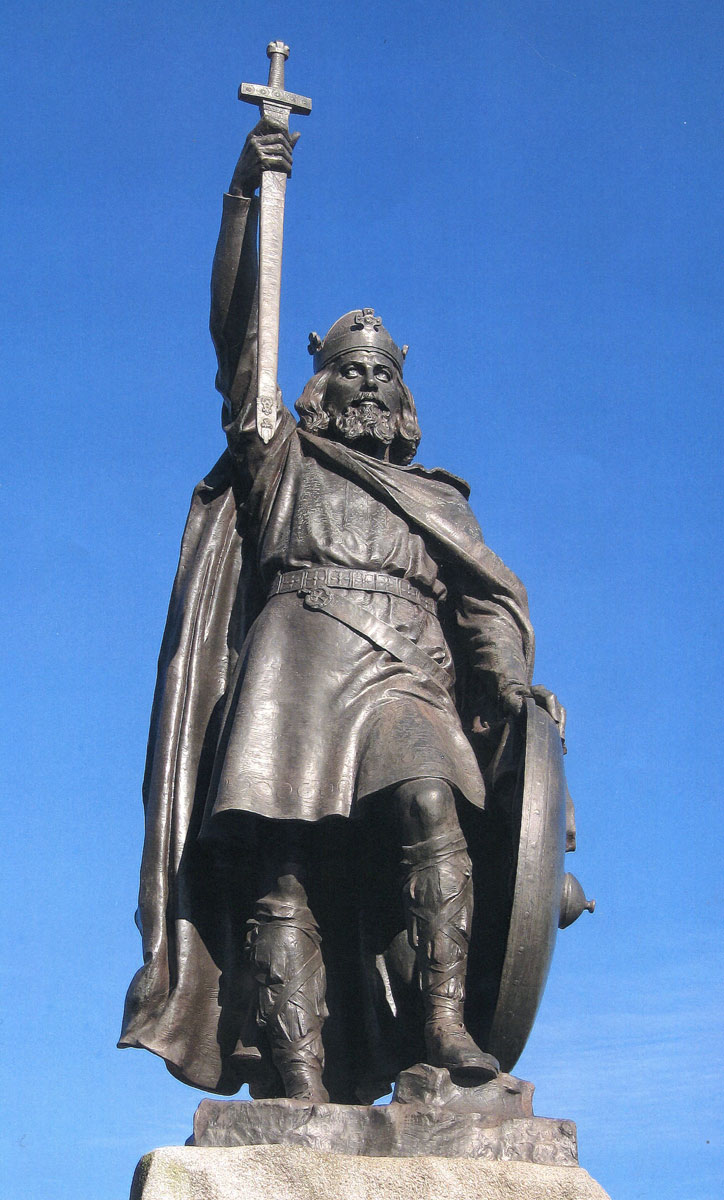 Statue of King Alfred in Winchester: Battle of Ashdown 8th January 871 AD in the Danish Wars: photo by Tim Dalziel

Contestant at the Battle of Ashdown: The English inhabitants of Wessex against Viking invaders from Scandinavia.

Commanders: King Eathered of Wessex commanded the English, with his younger brother Aelfred, soon to become King Alfred the Great, as his deputy. King Bagsac commanded the Vikings.

Background to the Battle of Ashdown:
“The Vikings” is the generic term for invaders originating in the countries of Norway, Denmark and Sweden. “Viking” comes from the language Old Norse. It means “a pirate raid”. For some 300 years from about AD 780, Vikings were violently active in many parts of the known world. It is thought that around AD 1000 they reached the east coasts of Canada and America.

By 870 the Vikings controlled the north and the east of England, including Kent, and were advancing slowly west and south west towards Wessex. The Vikings who had conquered the south east had come from Denmark.

Near the end of 870, Danes sailed up the River Thames in their longboats towards Reading in Berkshire. It is possible that they left their longboats in Maidenhead and then marched to Reading. This town is an important strategic location, being at the junction of the rivers Thames and Kennet. [A good defensive position would be established by building ditches and ramparts on the third side of the triangle.] The Danes arrived around 28 December.

No doubt the English defenders were still enjoying their Christmas celebrations as the town was easily captured. The English were driven away westwards and camped at Englefield, some 6 miles west of Reading, probably on the west bank of the River Bourne. The river here would have given some protection from an attack from the east. 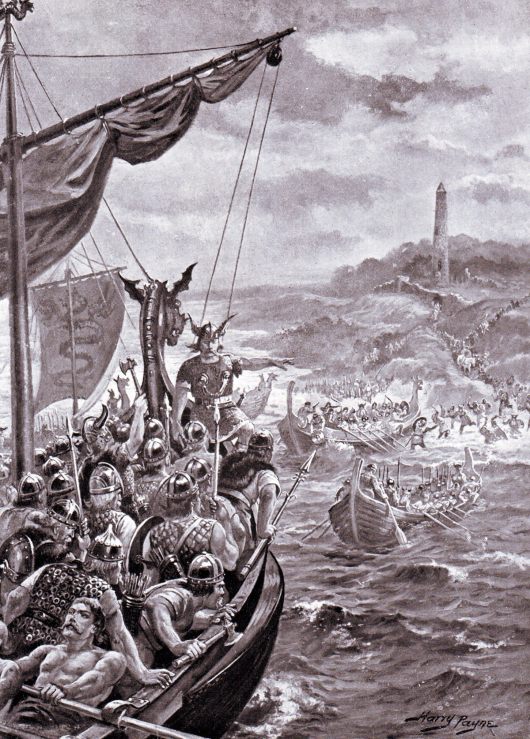 A large Danish reconnaissance party then went to search for the English forces. Bishop Asser wrote that there was a skirmish near Englefield around 31 December. This resulted in the Danes retreating back into Reading. The English attacked Reading in force around 4 January but were unsuccessful in recapturing the town. All over Wessex, tribesmen would have heard by now they were needed to repulse the enemy.

The English then retreated northwest towards the Ridgeway. [A system of ancient trackways had existed in England since prehistoric times before the arrival of the Romans. The Ridgeway is part of an ancient trackway running on high ground from the Dorset coast to the Wash. It crosses the Thames at Streatley.]

The Battle of Ashdown:
The site of the battle is unknown. Over the centuries many sites have been suggested as the location of the fighting, some a long way from Reading. As the battle was completed in a short winter’s day and ended at Reading, the author has accepted a short list of three possibilities. All three are in the area some 11 miles west north west of Reading and near the Ridgeway. The author has examined the area.

The English strategy was for the army to assemble and then march on Reading. Lowbury Hill (186m) is at Grid Reference SU 540823. This is a very prominent feature that would have been an excellent meeting point for the many small bands of tribesmen to rendezvous (RV) after travelling from their various hamlets throughout the Wessex area. Any other RV suggestion is less likely. The author thus rejected
Kingstanding Hill at Grid Reference SU 573838 and Thorn Hill at Grid Reference SU 539783. Neither would be easy to find for tribesmen who didn’t know the area and neither is a good natural defensive position from which to repel an enemy’s surprise attack. The author’s other conclusions follow. 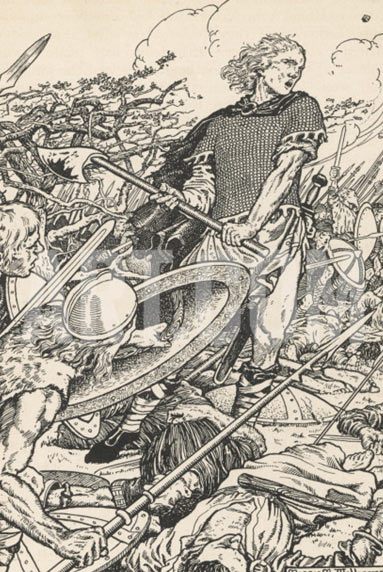 Near Lowbury Hill, six tracks meet at Grid Reference SU 534820 where there is now a small wood. In those days the wood would have been much larger. A wood could provide some shelter for the tribesmen from cold January winds. Thus it seems likely the English Army was established here, on the south side of the highest hills giving some protection from the weather. The tribesmen were waiting for more reinforcements to arrive from all over Wessex. Then the Danes appeared unexpectedly.

The Danish Army had left Reading on 7 January 871 to pursue the English. King Bagsac was in command. Their force may have been 500 to 1000 strong with only a few on horseback. Danish foot soldiers wore mail shirts and carried heavy two-handed battle axes. The English tribesmen, mostly farmers, wore woollen shirts and were armed merely with shields and spears.

King Alfred in the Danish camp

By nightfall on 7 January, the Danes reached Starveall at Grid Reference SU 545808. They would have camped overnight in the hollow near the edge of the spur as this would give the best protection from any attack. Sentries would keep a good lookout to warn of any English assaults.

With reinforcements, the English Army was now perhaps 1000 to 1500 strong. It was commanded by King Ethered of Wessex. [This is not the incompetent King Ethelred the Unready, who ruled from 978 to 1016 AD.] The Chronicle names him as Aethered. The English HQ was probably positioned where the six tracks meet at Grid Reference SU 534820. Ethered’s second-in-command was his younger brother, the future King Alfred, then aged 22. The Chronicle names him as Aelfred.

The force was split and Alfred’s half was on the left of the line in front of Lowbury Hill. The Danes then also split their army, with their King on the left and an earl in command on the right of the line. 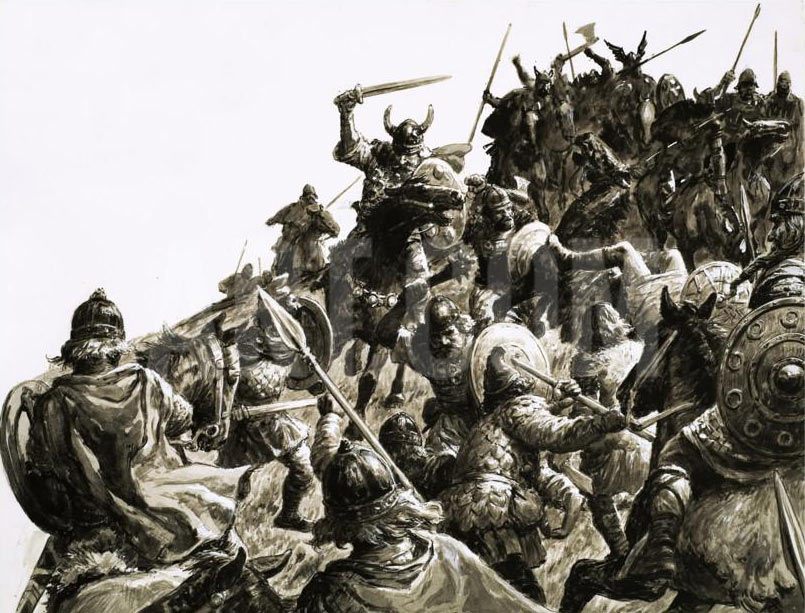 Vikings attack the Anglo-Saxon positions at the Battle of Ashdown 8th January 871 AD in the Danish Wars: picture by Cecil Doughty

First light was after 7 a.m. on 8 Janaury 871. Soon Alfred could see the two halves of the Danish army half a kilometre away, advancing slowly up the hill. Alfred had a shock when he saw his brother had decided that this was the time for the King’s half of the army to hold a prayer meeting to seek God’s help to achieve victory in the forthcoming battle. Of course the Danish Army would have held its own prayer meeting to its own gods earlier for the same purpose. (The Danes had not yet converted to Christianity so Bishop Asser described them as “heathen”.)

Alfred needed the advantage of high ground and couldn’t afford to wait for his elder brother to finish his religious devotions. So he ordered his own force to charge down the hill, no doubt with appropriate screams and howls to terrorise the enemy. Belatedly his brother attacked too.

The English used the advantage of their higher ground. The Danes were slowly driven back. Probably the centre of their “last stand” was between the junction of five tracks, Grid Reference SU 541815 and the spur north of Starveall, Grid Reference SU 545808; i.e. at approximately Grid Reference SU 543813. Here both halves of their Army amalgamated near a small rise in the ground and a thorn tree. [The Domesday book mentions a local area, called Nachede-dorne, meaning a naked or single thorn.] 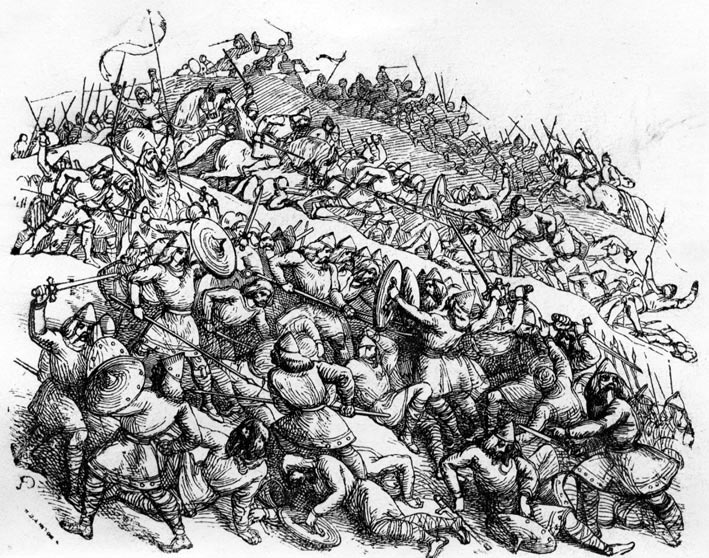 Battle of Ashdown: King Alfred’s defeat of the Danes in 871

The Danes were defeated, five of their earls were killed and as was their King Bagsac. The English chased the invaders back to the security of Reading. Bishop Asser stated that “many thousands were of the slain” but the author does not accept that the two armies were that large. Bishop Asser also stated that “fighting continued until night”. This seems likely as the Danish withdrawal, or flight, took place over approximately 11 miles and darkness arrives well before 5 pm in early January.

Aftermath of the Battle of Ashdown:
King Healfden took command of the Danes. The English King Ethered died suddenly in April 871 and Alfred was chosen to be King in his place. Neither of Ethered’s sons was chosen as the need was to select a king who would lead his Army in war. 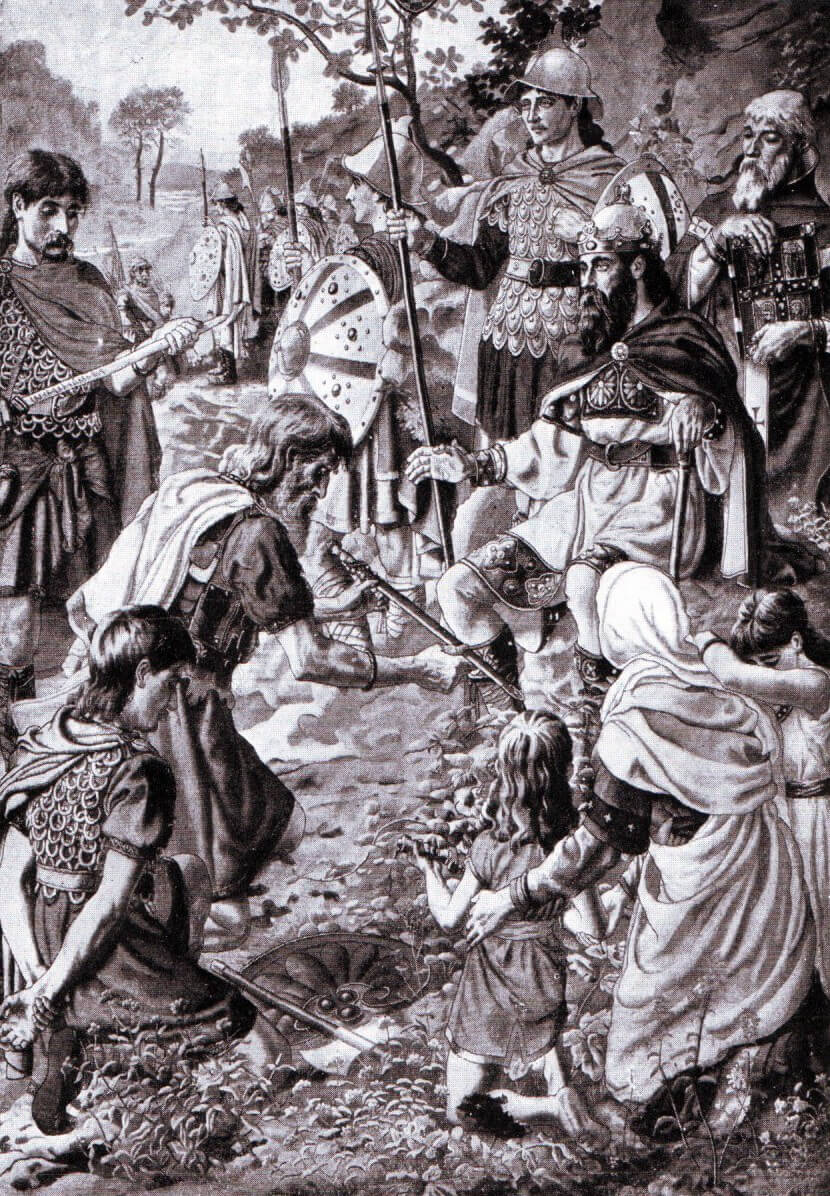 Tribal leaders submitting to Alfred after the battle

There were several more battles and skirmishes in AD 871 with the overall effect that the English were driven westwards towards Somerset. Nevertheless over the next few decades, Alfred forced the Danes eastwards towards London and beyond. He founded the English Navy. The influence of the Vikings in England almost totally ceased when King Harold beat them at the Battle of Stamford Bridge in AD 1066.

The author of this essay is David Young. David has walked around the area several times, studying the ground. The appropriate Ordnance Survey Map is 174. The name “Ashdown” comes from prehistory. Its Anglo-Saxon form is Aescesdun.

It must be emphasised however that much of this paper is speculation. The only surviving account of the battle was narrated in approximately AD 892 as part of The Anglo-Saxon Chronicle. The account was written in Latin by King Alfred’s friend, Bishop Asser of Sherborne. There is a translation on the internet. Readers should note that any account of a battle is probably biased if it is written by the victors. 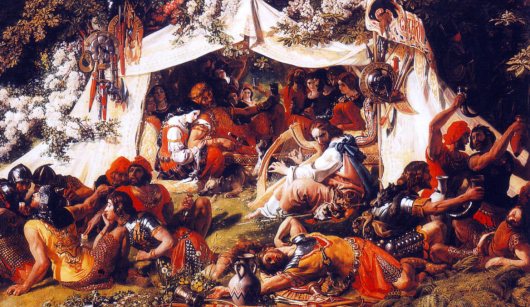 King Alfred in the Viking camp before the Battle of Ashdown disguised as a minstrel: the artist has given the scene a middle eastern flavour and dressed the Vikings as Roman soldiers.

• King Alfred became known as “Alfred the Great” but is remembered by schoolchildren for burning the cakes of the wife of a cowherd!
Canst thee not mind the cakes man? And doesn’t thee see them burn?
I’s bound thee’ll eat them fast enough as soon as ’tis thy turn.

To the Danish Wars Index