The first of Britain’s long list of defeats at the hands of the Boers, fought in Natal on 28th January 1881 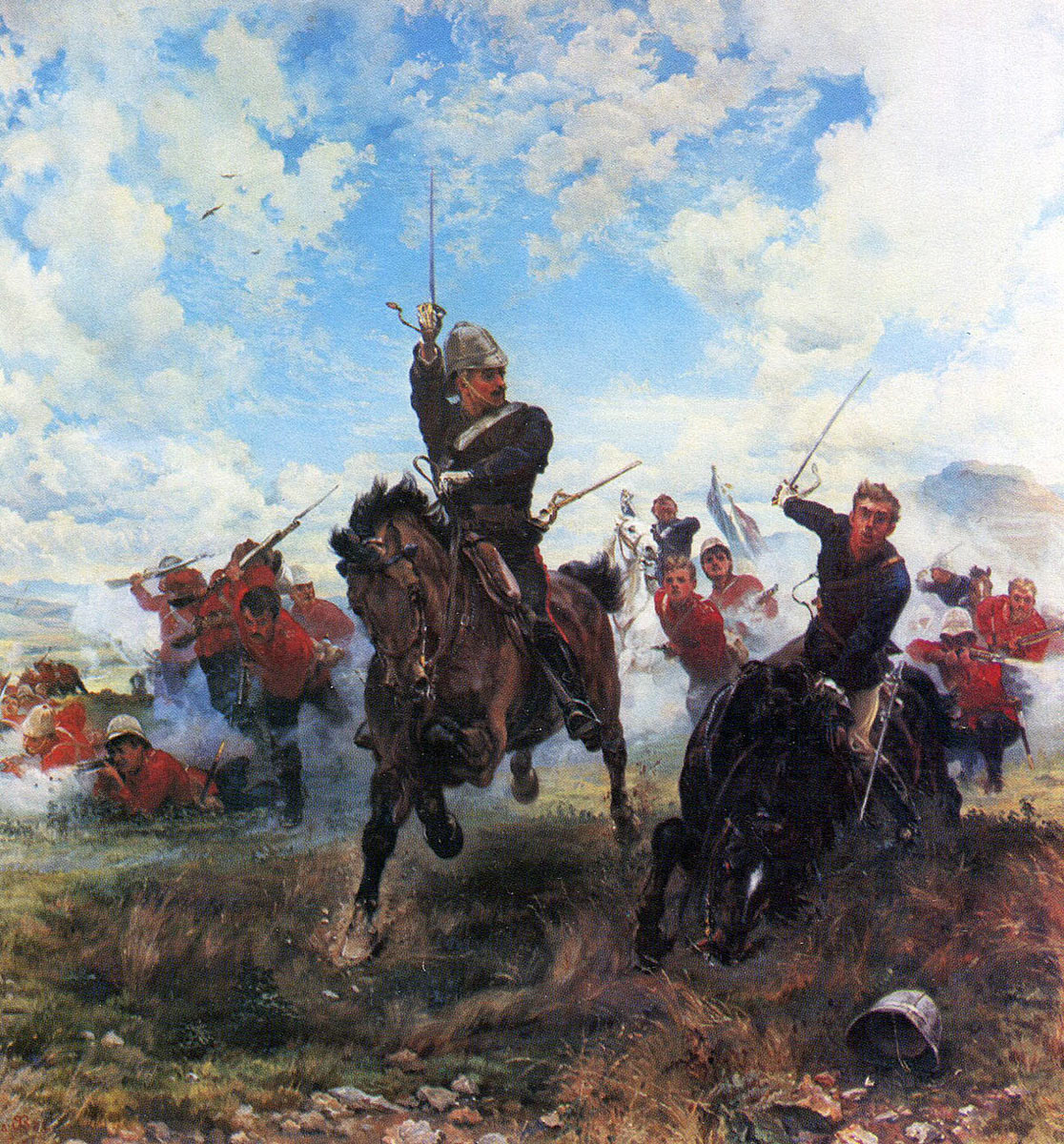 ‘Floreat Etona’: 58th Regiment at the Battle of Laing’s Nek on 28th January 1881 in the First Boer War: picture by Lady Butler

To the First Boer War index 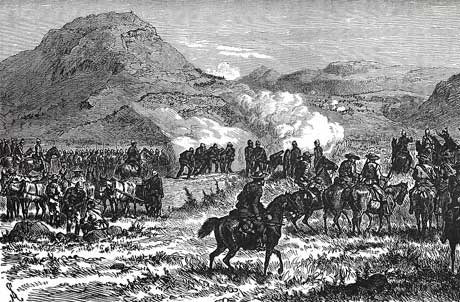 Place of the Battle of Laing’s Nek: In the northern tip of Natal near to the Transvaal Border, in South Africa.

Combatants at the Battle of Laing’s Nek: British against the Boers.

Uniforms, arms and equipment at the Battle of Laing’s Nek:
The British infantry in South Africa at that date wore red jackets, blue trousers with red piping to the side, white pith helmets and pipe clayed equipment. The standard infantry weapon was the Martini Henry single shot breech loading rifle with a long sword bayonet. Gunners of the Royal Artillery wore blue jackets. 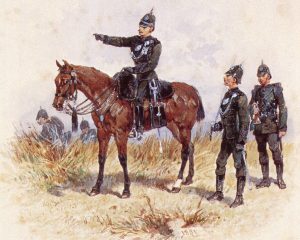 Rifles on exercise in England: Battle of Laing’s Nek on 28th January 1881 in the First Boer War: picture by Orlando Norie

The Boers, being essentially a citizen militia, wore what they wished, jacket, trousers and slouch hat with a bandolier and carried hunting rifles. The Boers were mainly mounted infantry, riding the ponies, they used to tend their stock, many with a life time’s experience of marksmanship. They carried no bayonet leaving them at a substantial disadvantage in close combat, which they avoided so far as possible.

Winner of the Battle of Laing’s Nek: The Boers.

Account:
The British annexation of the Transvaal Republic in April 1877 brought about the First Boer War, although it took some years to break out. On 20th December 1880, Lieutenant Colonel Anstruther and elements of his regiment, the 94th, marched from Lydenburg to Pretoria, the regiment’s band leading the column playing the popular song ‘kiss me mother darling’. At Bronkhorst Spruit the force was stopped by Boers who courteously required the ‘Red Soldiers’ to turn back. Armstrong equally courteously refused, at which the column was devastated by rifle fire from the surrounding Boer ambush. Of the 259 in the column, 155 officers and men became casualties, as did some of the women accompanying the regiment. 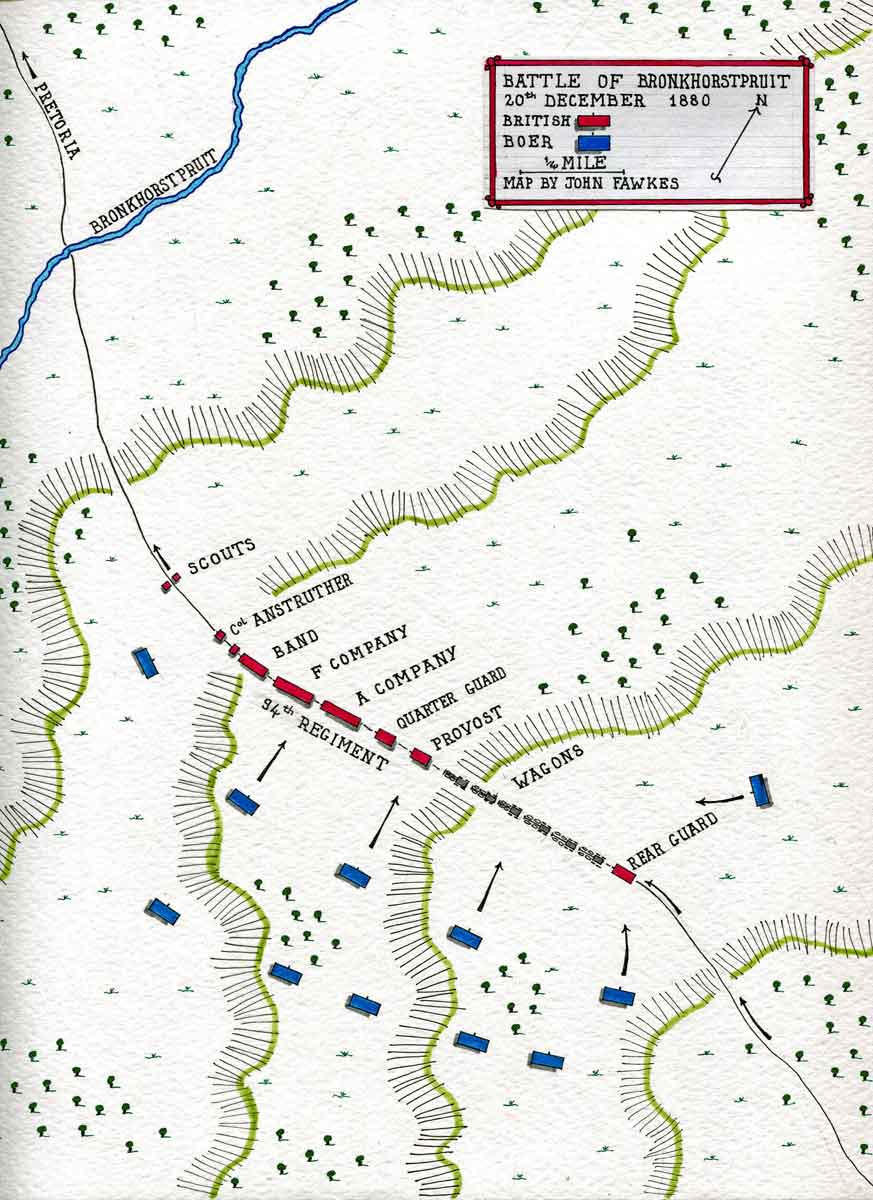 Map of the Action at Bronkhorstpruit on 20th December 1880: map by John Fawkes

The British High Commissioner for South East Africa, Major General Sir George Pomeroy Colley, instead of waiting for the reinforcements that were, on the outbreak of the war, sent to Southern Africa, assembled what troops he could and rushed forward, claiming to be moving to relieve the British garrisons in the Transvaal.

Colley gathered his force at Newcastle in Natal, dispatched an ultimatum to the Boers and, on its rejection, advanced towards the Transvaal border. The first British camp on the march lay some four miles short of Laing’s Nek, a ridge that blocked the road, occupied by a Boer force. 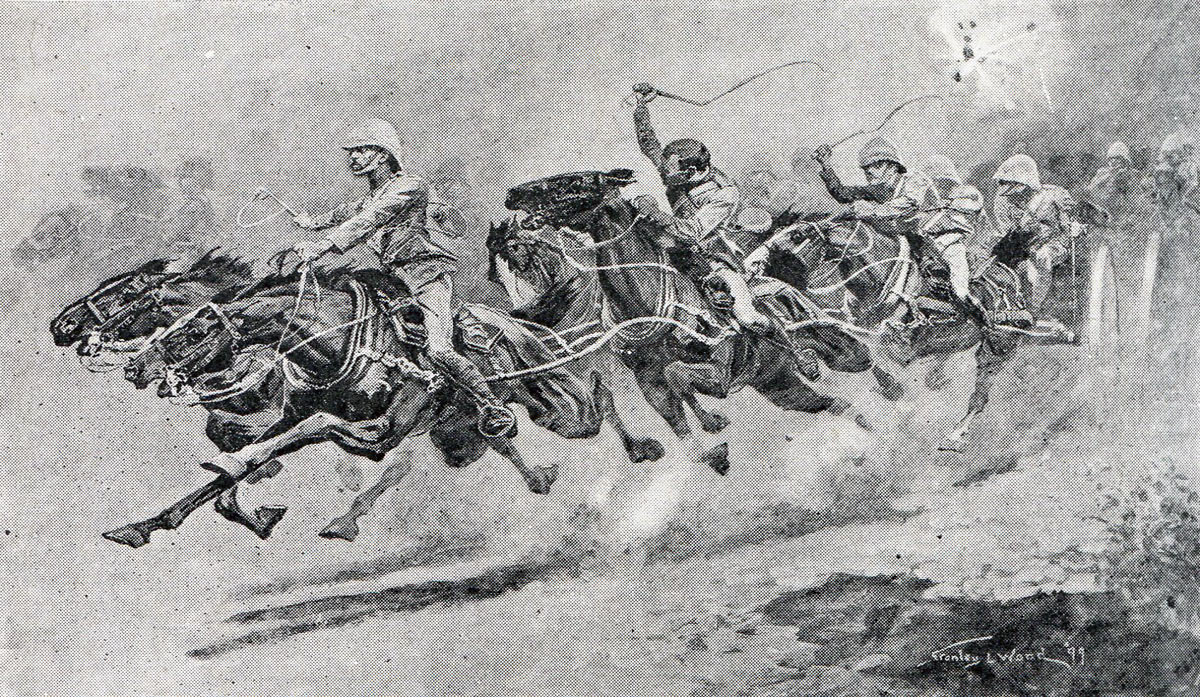 Bringing up the guns at the Battle of Laing’s Nek on 28th January 1881 in the First Boer War: picture by Stanley L. Wood

Colley took the road that climbed up to Laing’s Nek.  On each side, hills occupied by Boer riflemen overlooked the road. Colley led his force forward and wheeled to face the Boer positions on his right flank, causing the British rear to be exposed to the Boers holding the hills on the left side of the road. 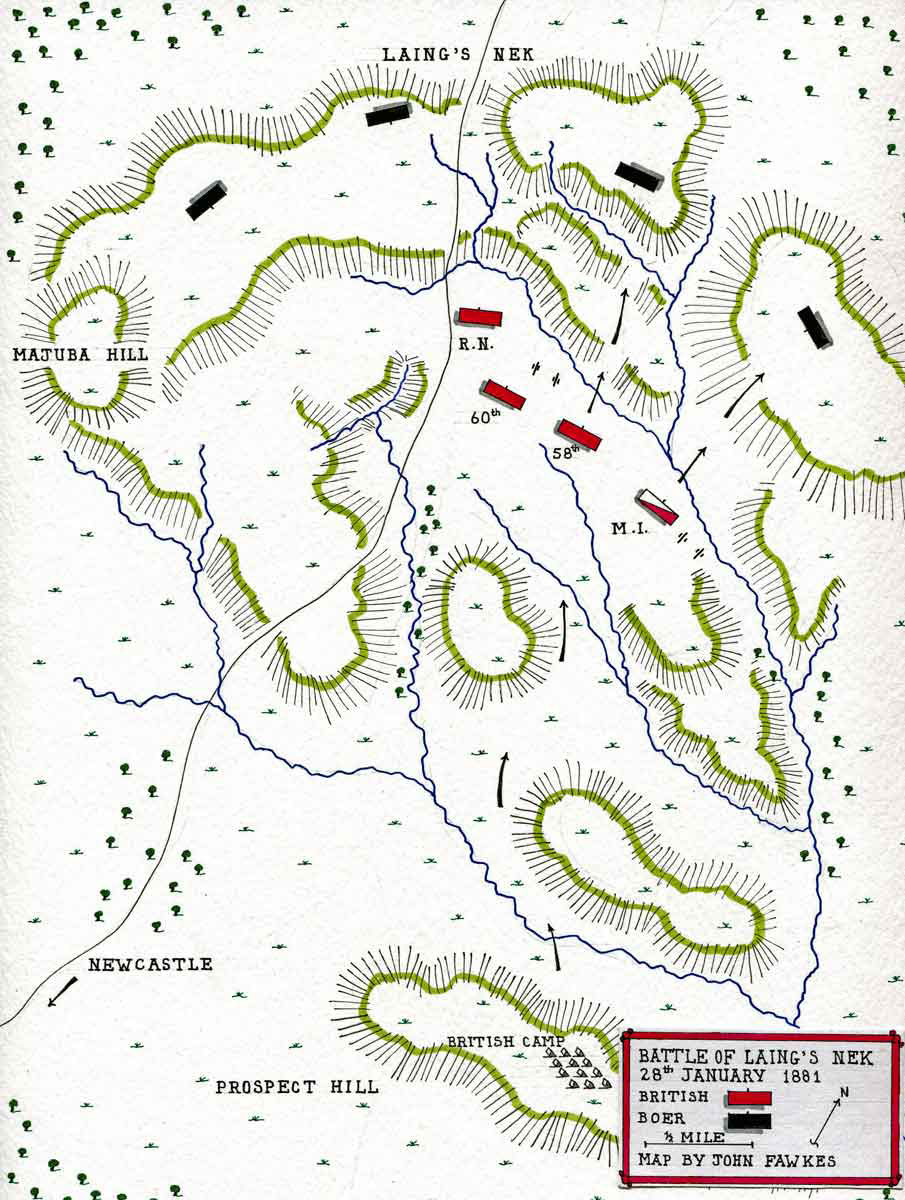 Map of the Battle of Laing’s Nek on 28th January 1881 in the First Boer War: map by John Fawkes

The battle began with a bombardment of the Boer’s left wing, inflicting slight casualties and a charge by the British mounted troops up the hill, which was repelled with some loss. This failed assault was followed by an attack further to the left, delivered by the companies of the 58th Regiment, led by Colonel Deane. The Boers, moving forward to shoot into the regiment’s flanks, opened a devastating fire on the red coated infantry, as they climbed the open hillside. The 58th suffered considerable casualties, including Colonel Deane and most of the regiment’s officers, before finally abandoning the attack and retiring to the bottom of the hill. 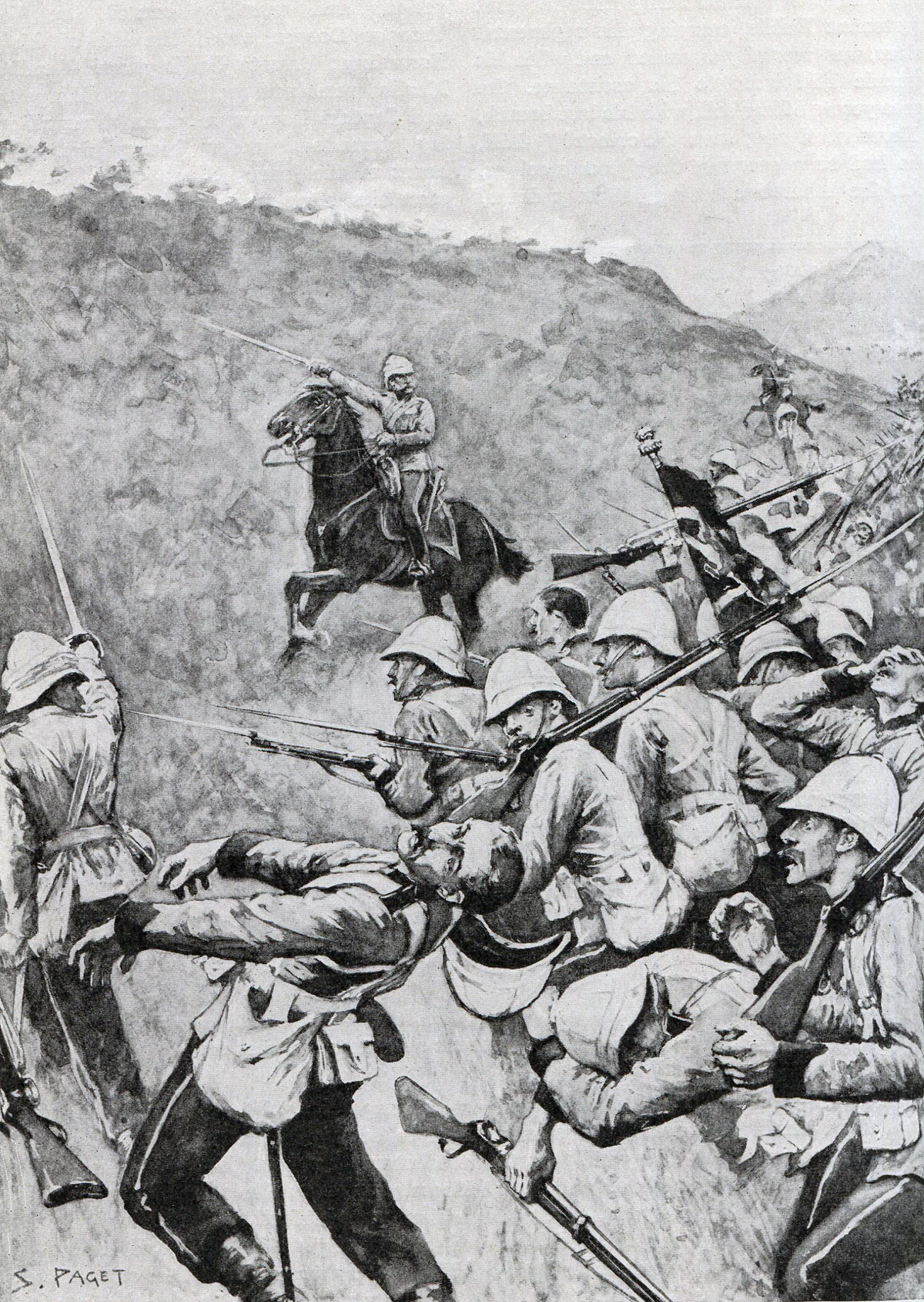 British 58th Regiment, with their Colours, storming the hillside at the Battle of Laing’s Nek on 28th January 1881 in the First Boer War: picture by S. Paget

The ‘Cease Fire’ sounded, ending the battle. A truce was negotiated, whereby the Boers permitted the British surgeons to attend the wounded on the hillside.

Follow-up: General Colley mustered his forces before moving forward for the disastrous battle at Majuba Hill.

Anecdotes and traditions from the Battle of Laing’s Nek:

References for the Battle of Laing’s Nek:

South Africa and the Transvaal War Volume I by Louis Creswicke

To the First Boer War index