You are here: Home / Peninsular War / Battle of San Millan and Osma

The clash in the mountains of Northern Spain on 18th June 1813, during the Peninsular War, between the van of Wellington’s advancing army and General Reille’s French ‘Army of Portugal’, withdrawing on Vitoria 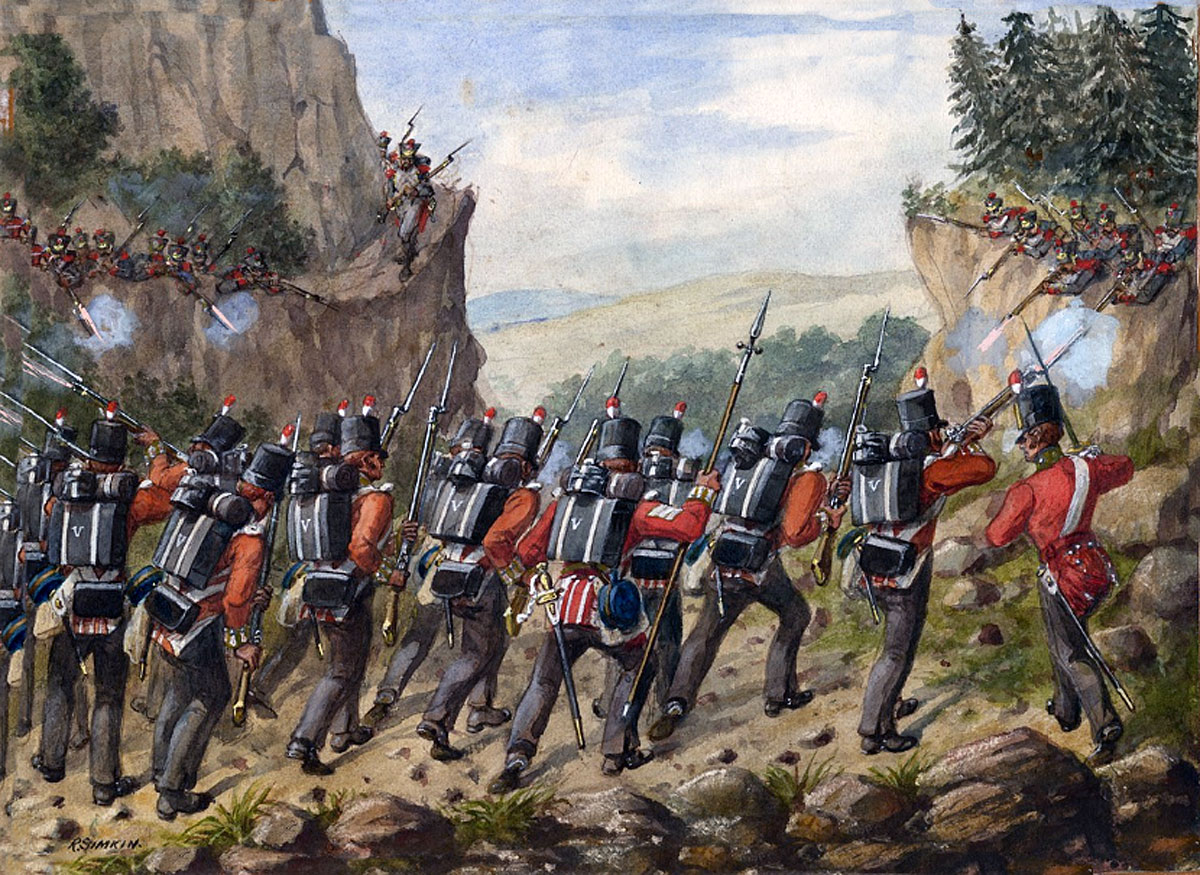 British troops in action in the mountains: Battle of San Millan and Osma on 18th June 1813 in the Peninsular War: picture by Richard Simkin

Général Reille, commander of the French ‘Army of Portugal’ at the Battle of San Millan and Osma on 18th June 1813 in the Peninsular War

Place of the Battle of San Milan and Osma: In the mountains to the west of Vitoria, in Northern Spain.

Combatants at the Battle of San Milan and Osma: British and Portuguese troops against the French.

Commanders at the Battle of San Milan and Osma: Lieutenant General Lord Wellington commanded the British troops in the battle. General Reille commanded the French Army of Portugal.

Size of the armies at the Battle of San Milan and Osma: Probably around 10,000 troops on each side were actively involved in the battle.

The British light dragoons wore light blue uniform coats and a leather helmet with a fur crest running front to back.

From 1812, the British light cavalry increasingly adopted hussar uniforms, with some regiments changing their title from ‘light dragoons’ to ‘hussars’.

The King’s German Legion (KGL) was formed largely from the old disbanded Hanoverian army.  The KGL owed its allegiance to King George III of Great Britain, as the Elector of Hanover, and fought with the British army.  The KGL comprised both cavalry and infantry regiments.  KGL uniforms followed the British.

The Spanish army essentially was without uniforms, existing as it did in a country dominated by the French. Where formal uniforms could be obtained, they were white. 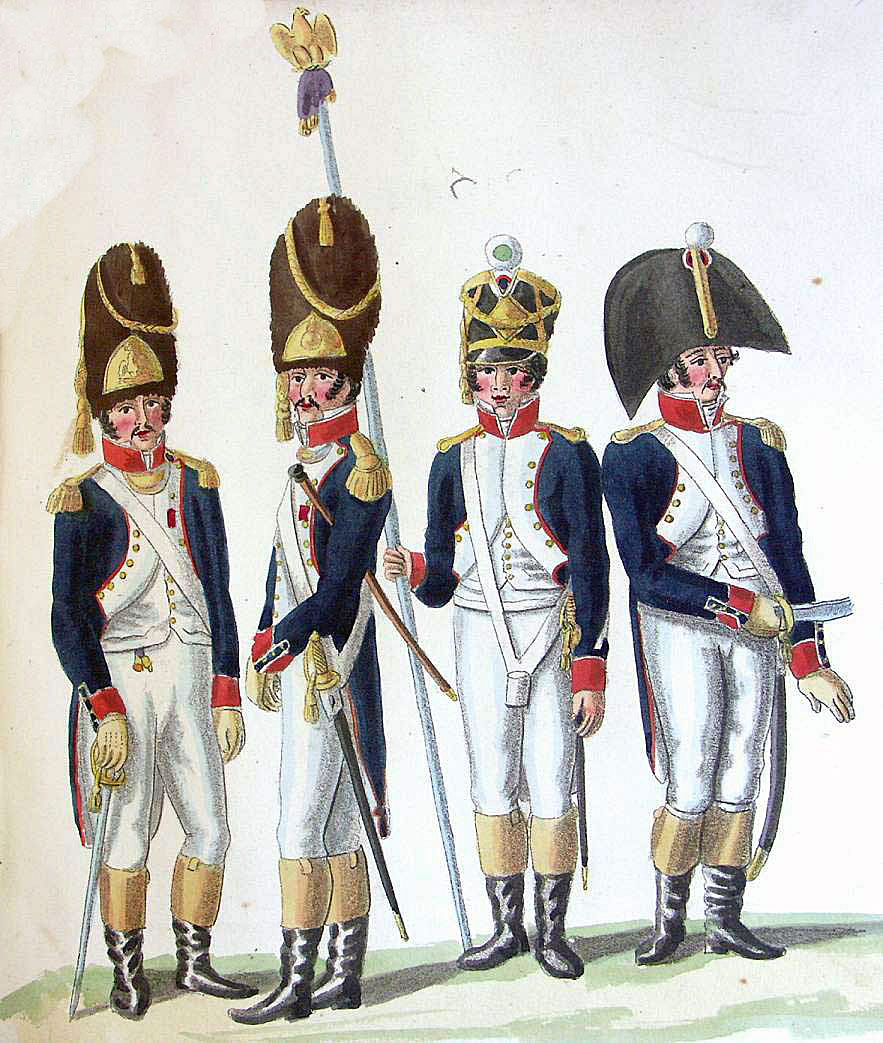 Officers of French infantry: Battle of San Millan and Osma on 18th June 1813 in the Peninsular War: picture by Suhl

The French army wore a variety of uniforms. The basic infantry uniform was dark blue.

The standard infantry weapon across all the armies was the muzzle-loading musket. The musket could be fired at three or four times a minute, throwing a heavy ball inaccurately for a hundred metres or so. Each infantryman carried a bayonet for hand-to-hand fighting, which fitted the muzzle end of his musket.

The British rifle battalions (60th and 95th Rifles) carried the Baker rifle, a more accurate weapon but slower to fire, and a sword bayonet. 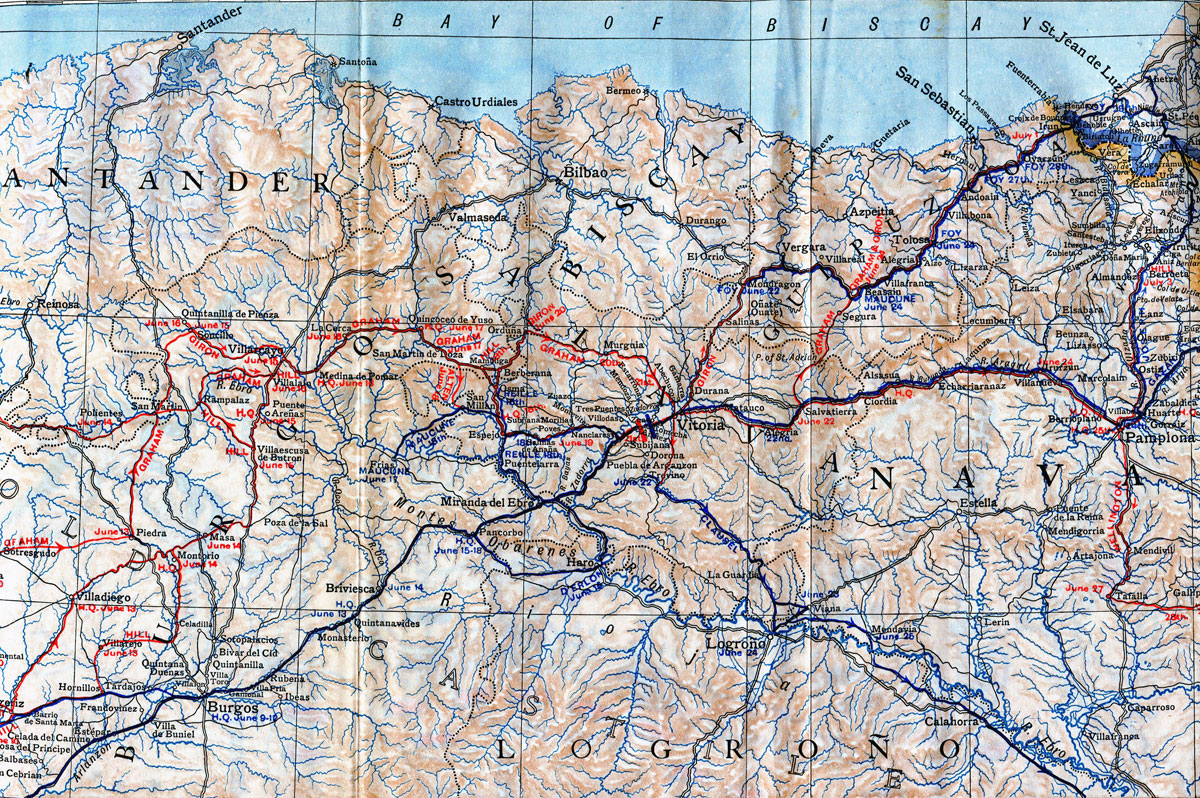 Throughout the Peninsular War and the Waterloo campaign, the British army was plagued by a shortage of artillery. The Army was sustained by volunteer recruitment and the Royal Artillery was not able to recruit sufficient gunners for its needs.

Napoleon exploited the advances in gunnery techniques of the last years of the French Ancien Régime to create his powerful and highly mobile artillery. Many of his battles were won using a combination of the manoeuvrability and fire power of the French guns with the speed of the French columns of infantry, supported by the mass of French cavalry.

While the French conscript infantry moved about the battle field in fast moving columns, the British trained to fight in line. The Duke of Wellington reduced the number of ranks to two, to extend the line of the British infantry and to exploit fully the firepower of his regiments.

Winner of the Battle of San Milan and Osma: The French were driven back by Wellington’s significantly stronger force, continuing the French retreat to Vitoria. 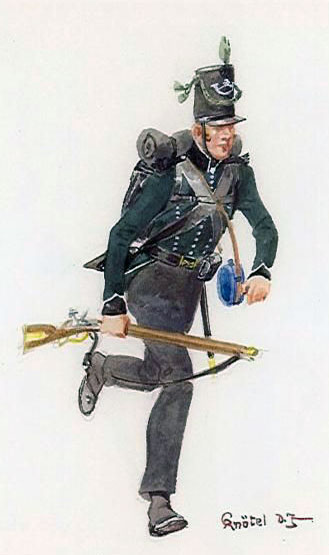 Soldier of the 95th Rifles: Battle of San Millan and Osma on 18th June 1813 in the Peninsular War: picture by Richard Knötel

Background to the Battle of San Milan and Osma:

(see britishbattles.com’s Battle of Vitoria for the full account of Wellington’s preparations in the winter of 1812/13 and his advance into Spain in April to June 1813)

Joseph Bonaparte, Napoleon’s brother, imposed on the Spanish by the Emperor as King of Spain, in 1812 struggled to hold his kingdom for France.

The French armies of the Centre, of Portugal, of the North and of the South, were operating against the Spanish insurrectionist forces across Spain.

Joseph and his chief of staff, Marshal Jourdan, worked to bring these French forces together to confront Wellington’s 1813 invasion of Spain from Portugal, with an army considerably re-inforced during the winter of 2012/3.

Jourdan’s view and that of the senior French commanders was that Wellington’s army could only advance north-east through Spain by way of the main route from Ciudad Rodrigo, through Salamanca, Valladolid and Burgos to Vitoria and on to the French border at Bayonne at the north-western end of the Pyrenees Mountains.

Wellington did not take this route. His troops crossed the border at the north-eastern corner of Portugal and advanced parallel to the main Burgos route through the mountains, along roads the French considered impassable for an army.

The going was difficult at times, but Wellington’s British, Portuguese and Spanish regiments and, in particular, his artillery made good progress along the mountain tracks.

In mid- June 1813, the main French army was stretched along the Ciudad Rodrigo to Vitoria road, north of Burgos, with Joseph anxiously seeking some sign that Wellington was behind him, so he could deliver a decisive check on Wellington’s advance.

Wellington was not behind them. Already his army was marching around Joseph’s north-west flank.

For the march from the Portuguese border, Wellington divided his army into several columns, each taking a different route through the border mountains. 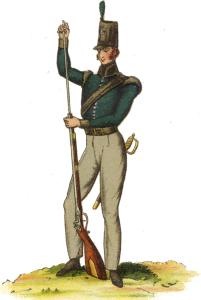 1st Light Battalion of the King’s German Legion: Battle of San Millan and Osma on 18th June 1813 in the Peninsular War

The new direction brought Wellington’s columns together, so that on the evening of 16th June 1813, almost the whole army was assembled.

In the meantime, the French high command still believed that Wellington must be marching up the road from Burgos behind the main French army, on the basis that the mountains to the west of this highway were impassable to an army equipped with artillery. Jourdan was less convinced that Wellington was not passing his right flank as his troops labored north on the Burgos road.

Particularly worrying for Jourdan was the French army’s inability to supply itself.

French armies lived off the countryside they passed through, a practice feasible in the richer areas of Europe. In Spain few areas could support large bodies of troops for even a few days, ensuring that the French armies in Spain were forced to keep on the move or starve.

It was only possible for Wellington to move his army through the inhospitable mountains of north-western Spain thanks to his large and well-organised commissariat. Even then, the speed of Wellington’s advance meant that the commissariat was unable to keep up with the troops, leading to shortages.

On 16th June 1812, Wellington entertained several of his generals to dinner at Medina de Pomar, 60 miles north of Burgos and 70 miles west of Vitoria.

On 17th June 1812, Wellington’s army marched out of Medina de Pomar for Vitoria, Graham’s column leading, followed by the columns of Wellington and then of Hill.

The British Sixth Division remained in Medina de Pomar to guard the stores.

The going during the day was such as to require horses to be led and guns to be manhandled with locked wheels.

Reports now came in to Jourdan reporting the presence of British soldiers to the south-west of Medina de Pomar. Far from being behind the French troops on the Burgos road, Wellington’s troops were north of Joseph and marching to cut French communications with France.

Joseph feared that Wellington’s intention was to take Bilbao on the Biscayan Coast.

Reille, commanding the Army of Portugal, was ordered to march to the relief of the French garrison in Bilbao.

Reille ordered Maucune, at present some distance to his south-west, to bring his division up to Osma.

The countryside was mountainous, intersected by a few poor roads. 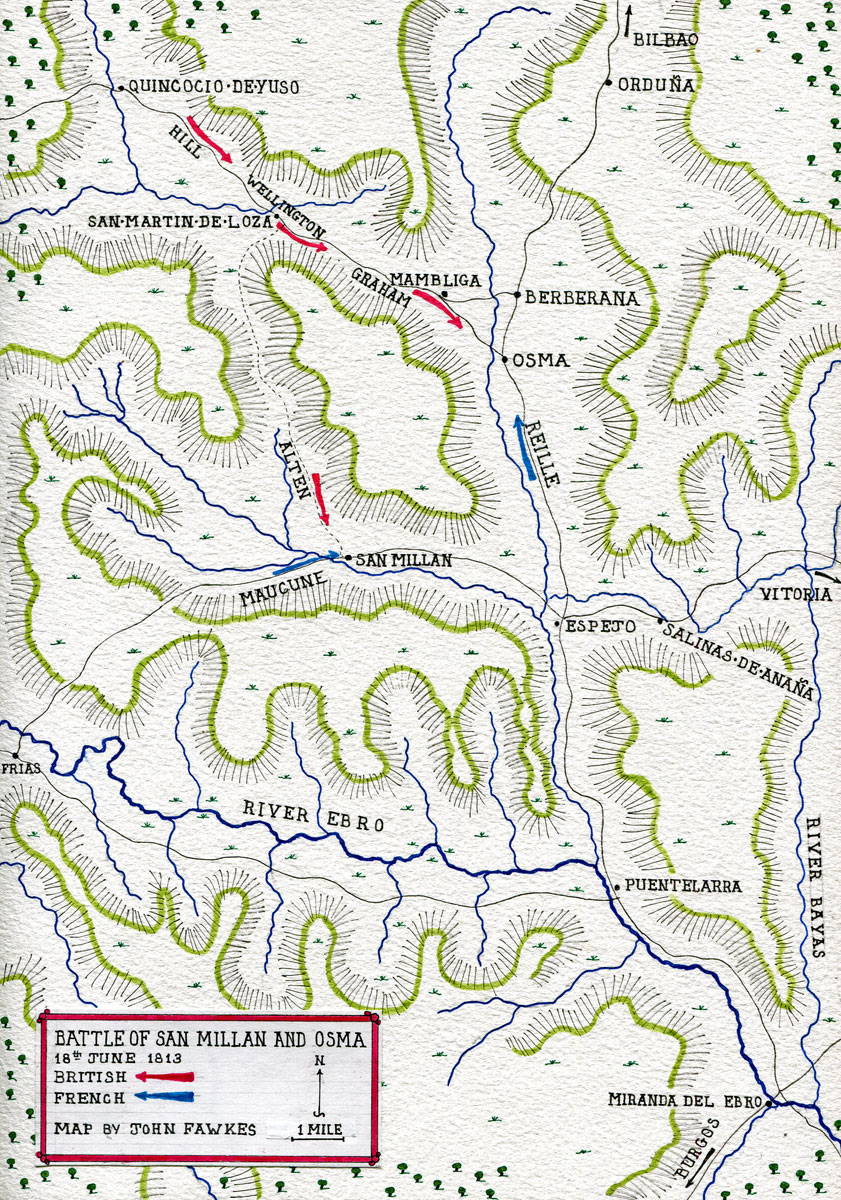 Map of the Battle of San Millan and Osma on 18th June 1813 in the Peninsular War: map by John Fawkes

The Battle of San Milan and Osma:

General Reille received information during the night of 17th/18th June 1817 that Wellington was marching, not on the road north-east towards Bilbao, but east-south-east on the road through San Martin de Losa towards Vitoria; that is straight towards him.

Reille arrived in the hamlet of Osma in time to see Graham’s columns marching out into the plain towards him.

A prolonged cannonade ensued between the opposing armies.

Reille hung onto his position, in the expectation that he would be joined by Maucune’s division, but other than the sounds of a prolonged bombardment coming from the west, there was no sign of Maucune.

With the arrival of more British troops, as the First, Third and Fifth Divisions marched into the plain, supported by a substantial body of cavalry, Reille withdrew south down the road to Espejo.

Meanwhile to the west, Maucune was under attack, after marching along the north side of the River Ebro and joining the main west-east road at San Millan.

Reille’s suggestion to Maucune had been that it would be wise to take the road along the south bank of the River Ebro and cross the river where it was crossed by the north-south Bilbao road.

In the interests of speed, Maucune did not adopt this advice.

At San Millan, Maucune’s division joined the road along which Wellington’s columns were passing.

Maucune’s leading brigade halted at San Millan to await the rest of the division and, in the belief that the British were miles away, took no proper precautions by way of outposts.

The British Light Division came up, marching parallel to the road, as was their practice.

The French rear guard of a squadron of light cavalry was seen to be filing into San Millan.

A small body of the 1st KGL Hussars advanced at the trot and engaged the French light cavalry, dispersing them and taking several prisoners. 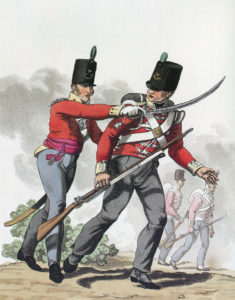 Officer and soldier of the 52nd Light Infantry: Battle of San Millan and Osma on 18th June 1813 in the Peninsular War: picture by Hamilton Smith

Wellington, arriving on the scene, committed the rest of Kempt’s Brigade and a battalion of Portuguese Caçadores to the attack.

These various units harried Maucune’s men along the road, while Wellington ordered the Fourth Division to march to Espejo to intercept the French retreat, but were too late to catch them.

Maucune’s Second Brigade, on emerging from the side road onto the main west-east road, was immediately attacked by the 52nd Light Infantry and a fierce contest took place over the occupation of a hill top.

The French baggage train stampeded up a hill and was taken by the British troops, after a fierce resistance by its guards.

That night, Reille fell back along a side road to the east, rallying his three divisions in the village of Salinas de Anaña.

Wellington’s columns encamped along the Bilbao road from Mambliga to Espejo.

Casualties in the Battle of San Milan and Osma:

British casualties in the battle were around 150 killed, wounded and missing.

Follow-up to the Battle of San Milan and Osma:

Reille intended to continue his retreat to the east, towards the French border, but Joseph did not dare risk the loss of his substantial baggage train in Vitoria or to endanger Clausel’s force, currently marching to join him in Vitoria.

Reille was ordered to bring his Army of Portugal to Vitoria, ensuring that it was part of the French order of battle for the Battle of Vitoria.

Anecdotes and traditions from the Battle of San Milan and Osma:

References for the Battle of San Milan and Osma:

See the extensive list of references given at the end of the Peninsular War Index.