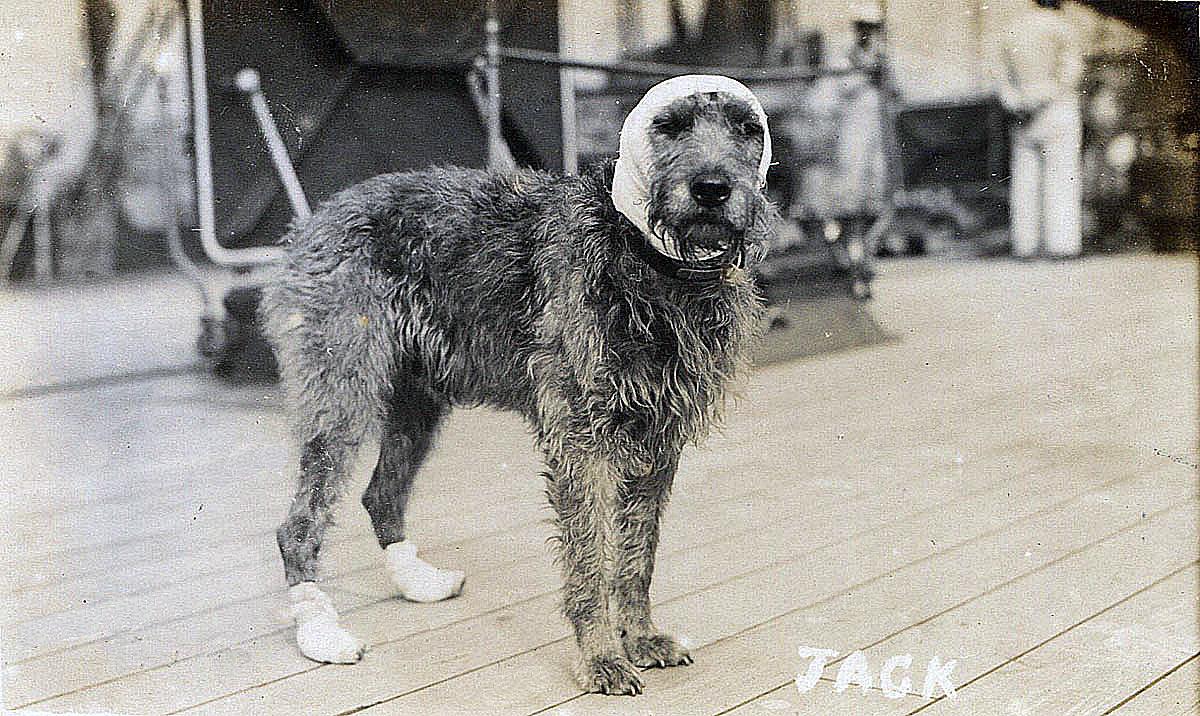 The previous battle of the First World War is the Battle of Jutland Part IV: the Night Action 31st May to 1st June 1916

To the First World War Index

Aftermath to the Battle of Jutland: 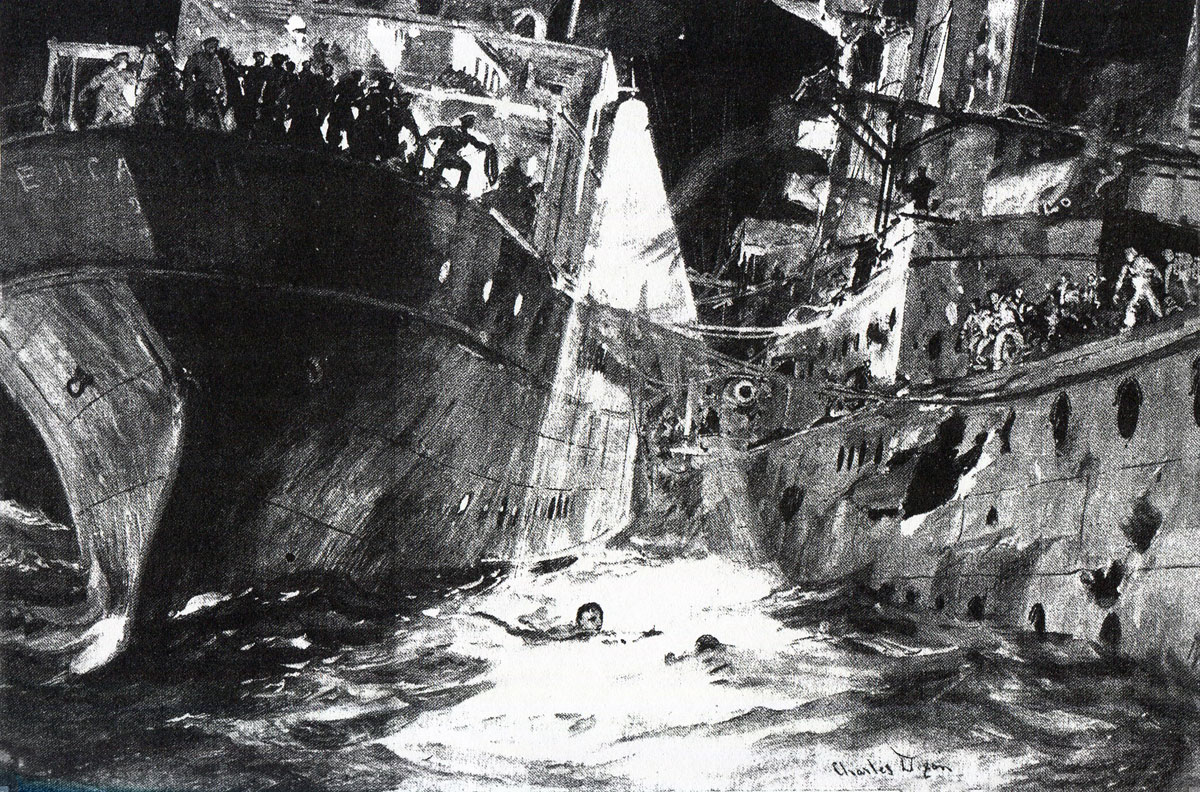 Following the destruction of HMS Defence, HMS Warrior escaped to the west out of the battle area where she met up with Admiral Beatty’s Seaplane Carrier HMS Engadine.  With considerable difficulty, being a much smaller ship, Engadine took Warrior in tow.  Warrior was filling with water and during the night became increasingly difficult to manage. 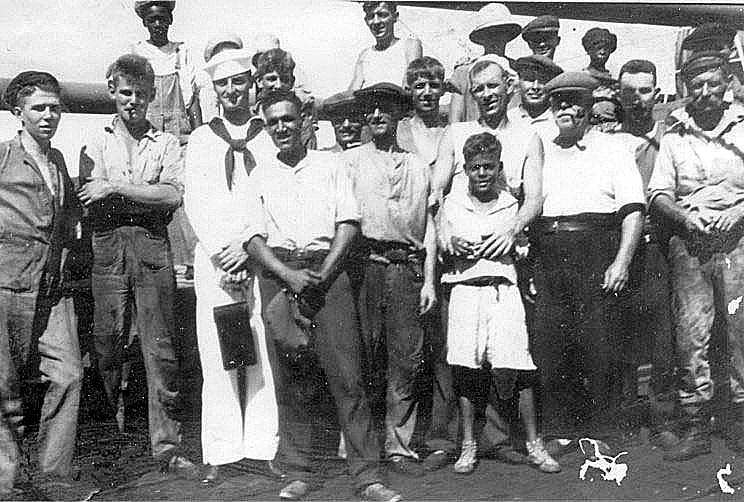 Members of the crew of British Battle Cruiser HMS Indefatigable: Indefatigable was sunk at the Battle of Jutland 31st May 1916

On the morning of 1st June 1916 the weather worsened and it was decided to transfer Warrior’s crew to Engadine and abandon the now sinking Warrior.  As an ex-cross Channel excursion vessel Engadine was fitted with strong rubbing strakes and the captain Lieutenant-Commander Robinson RNR with considerable skill managed to bring Engadine alongside the wallowing armoured cruiser. 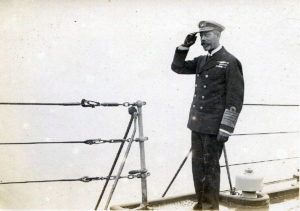 Warrior’s crew transferred across.  The wounded were moved in cradles.  One wounded man, a double leg amputee, slipped out of his cradle into the sea between the ships.  Two Warrior officers were ordered not to attempt a rescue as too dangerous.

Flight Lieutenant Rutland, the pilot of the Short 184 that had carried out the reconnaissance at the beginning of the Battle of Jutland, climbed down the side of the ship unnoticed made his way to the sailor and recovered him with a line. It was found that the wounded man had been crushed to death between the ships.  Rutland received the Albert Medal First Class for Attempting to Save Life.  Warrior sank the next night. 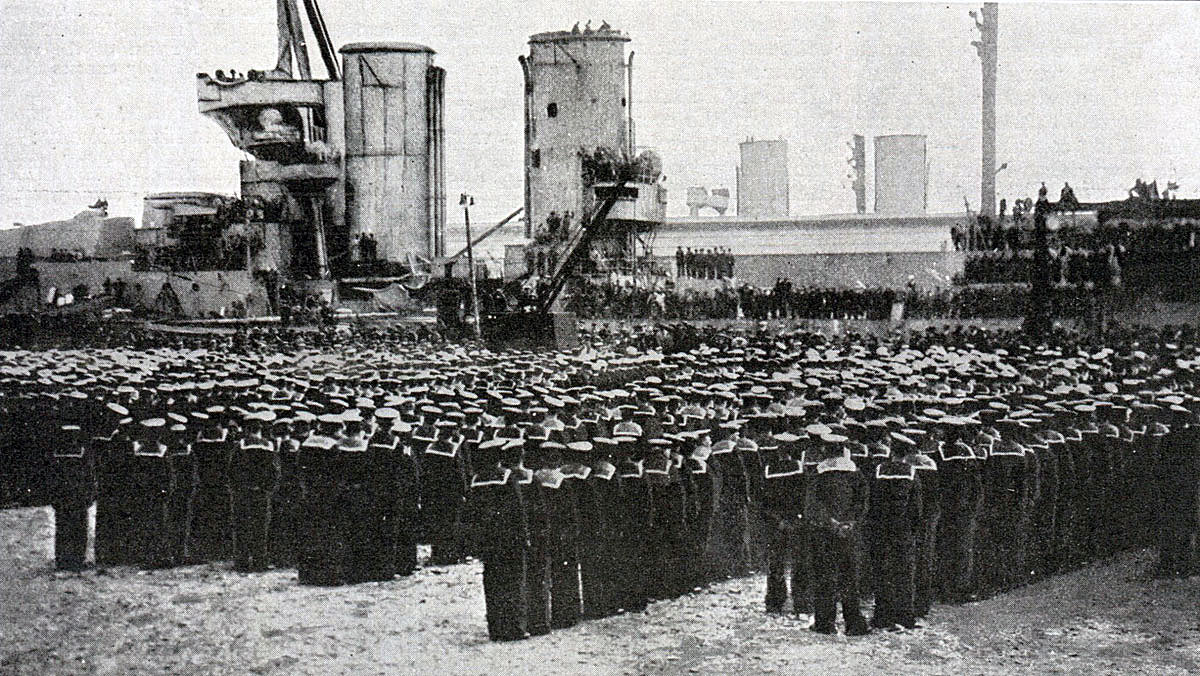 Once the two national fleets returned to harbour each was addressed by its sovereign.  King George V addressed a parade of sailors of the Grand Fleet from the deck of the badly damaged HMS Warspite.  Kaiser Wilhelm II addressed his officers and sailors in Kiel Harbour.  Each congratulated his navy on a resounding victory. 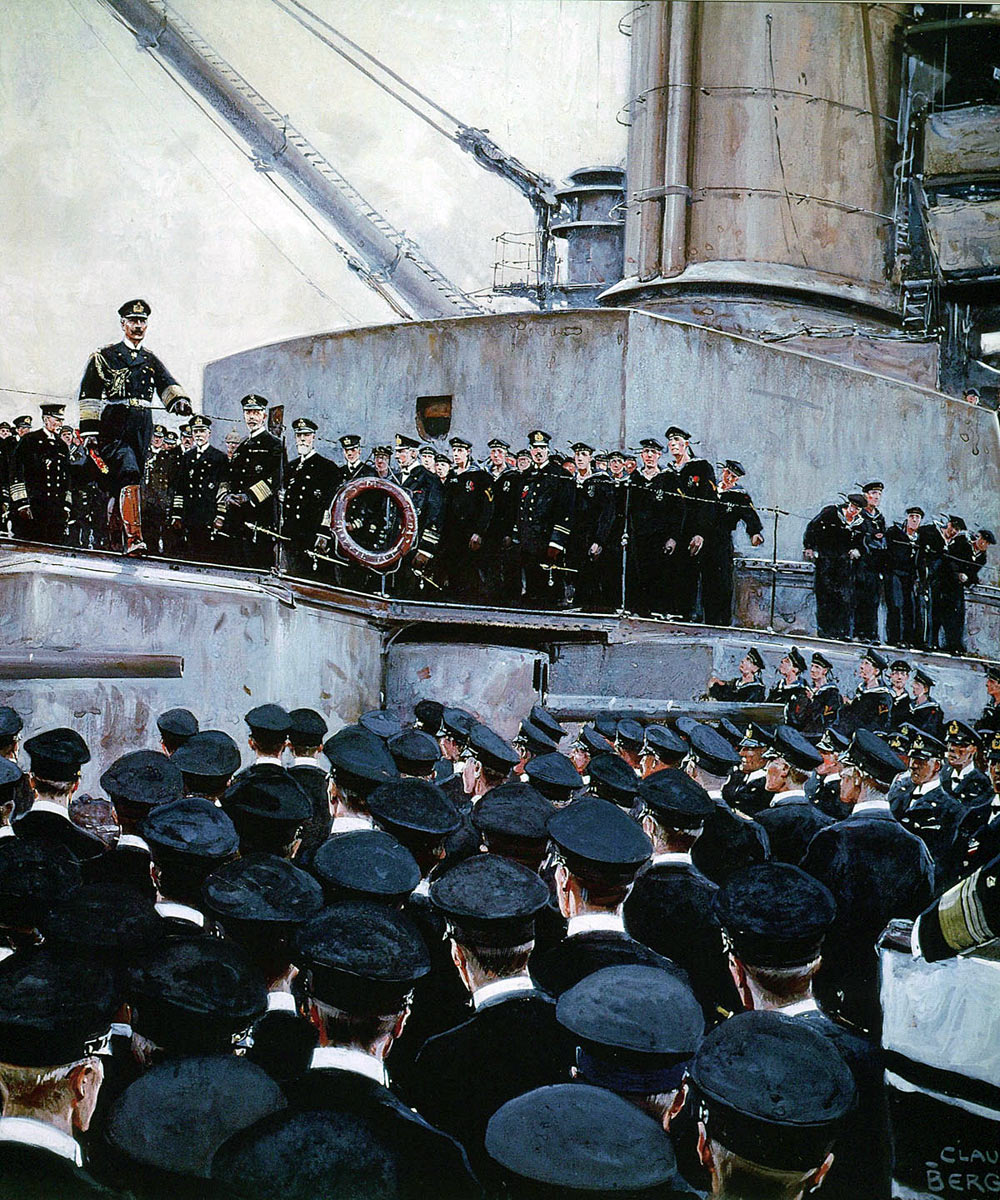 Kaiser Wilhelm II addressing officers of his High Seas Fleet after the Battle of Jutland: picture by Claus Bergen 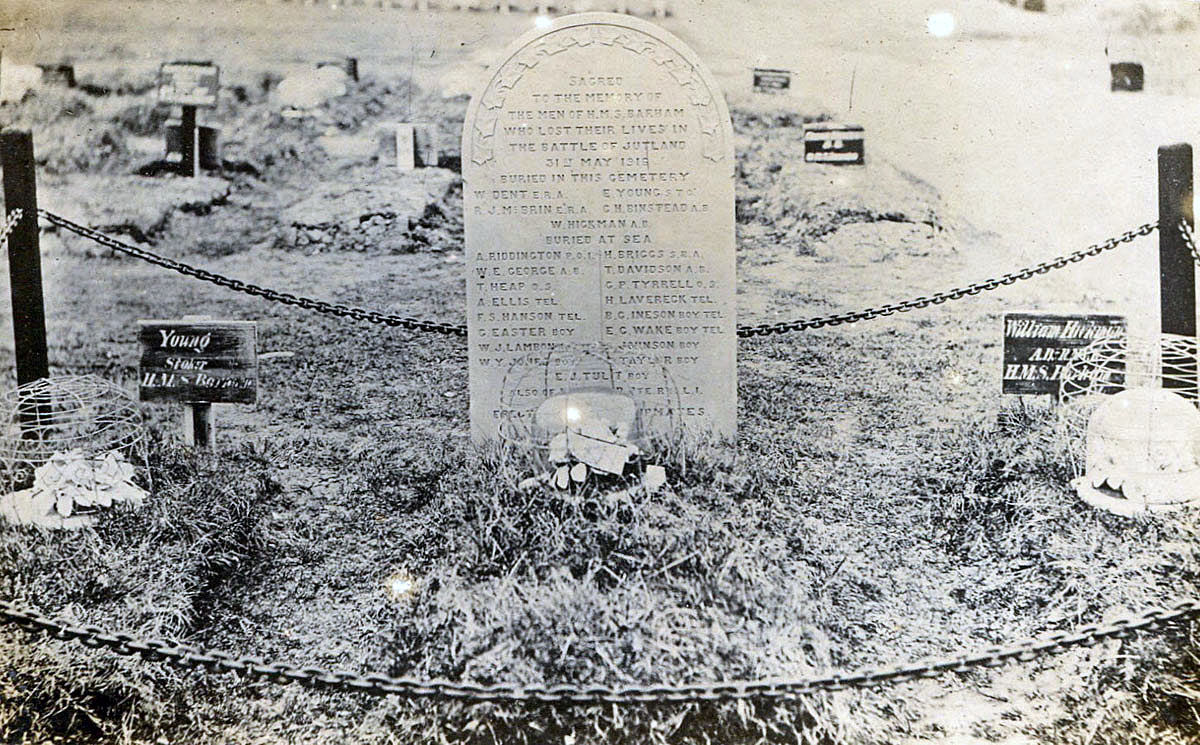 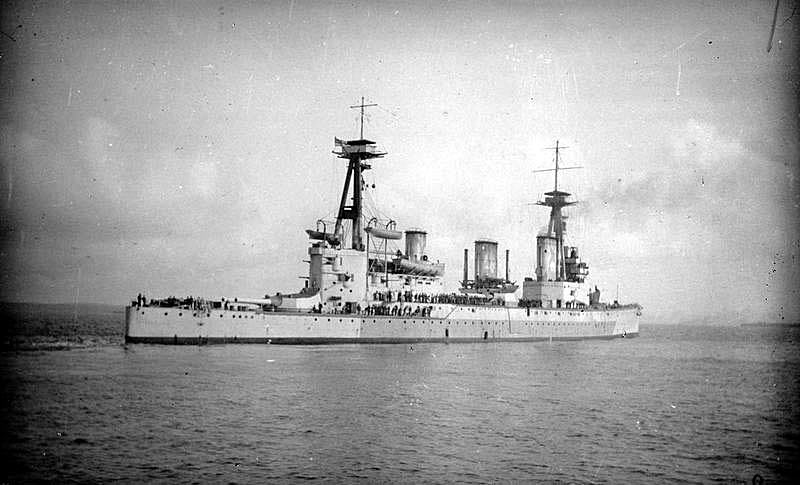 HMS Infefatigable, sunk at the Battle of Jutland 31st May 1916

‘Wounded Lion’ by Lionel Wyllie. The British Batttle Cruiser HMS Lion, Flagship of Admiral Beatty, lies in the Firth of Forth after the Battle of Jutland on 31st May 1916, the Forth Railway Bridge in the background 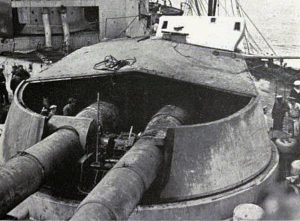 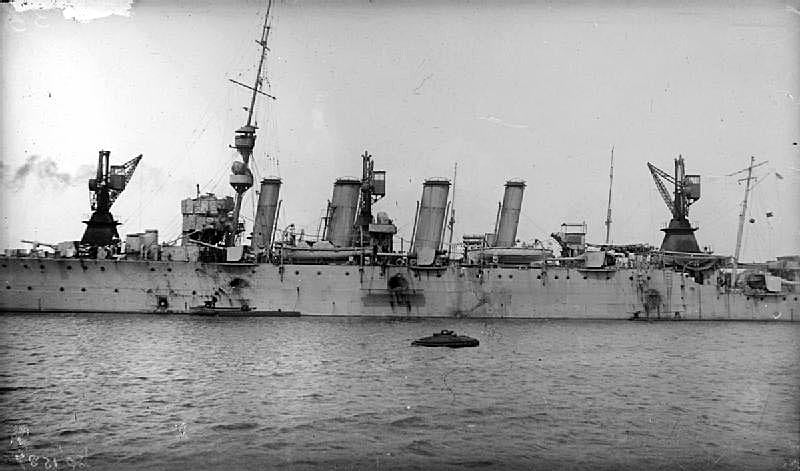 Members of the crew of HMS Shark before the Battle of Jutland on 31st May 1916. Probably none of the men in the photograph survived the battle 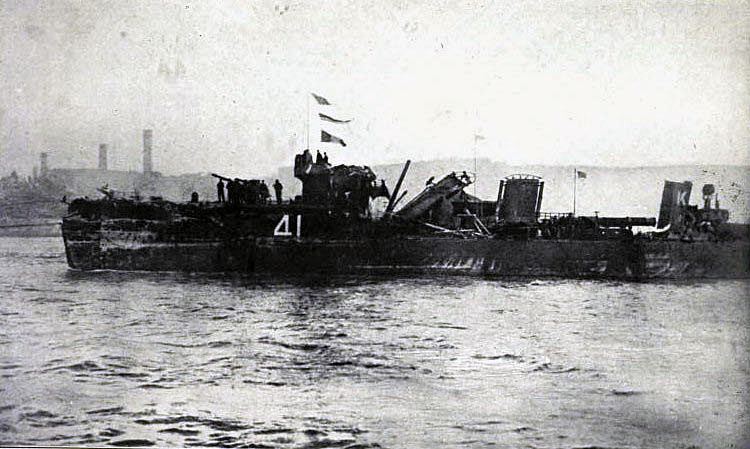 TOTALS of British casualties at the Battle of Jutland 31st May 1916: 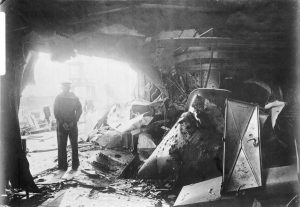 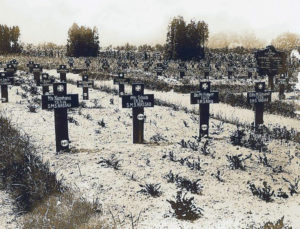 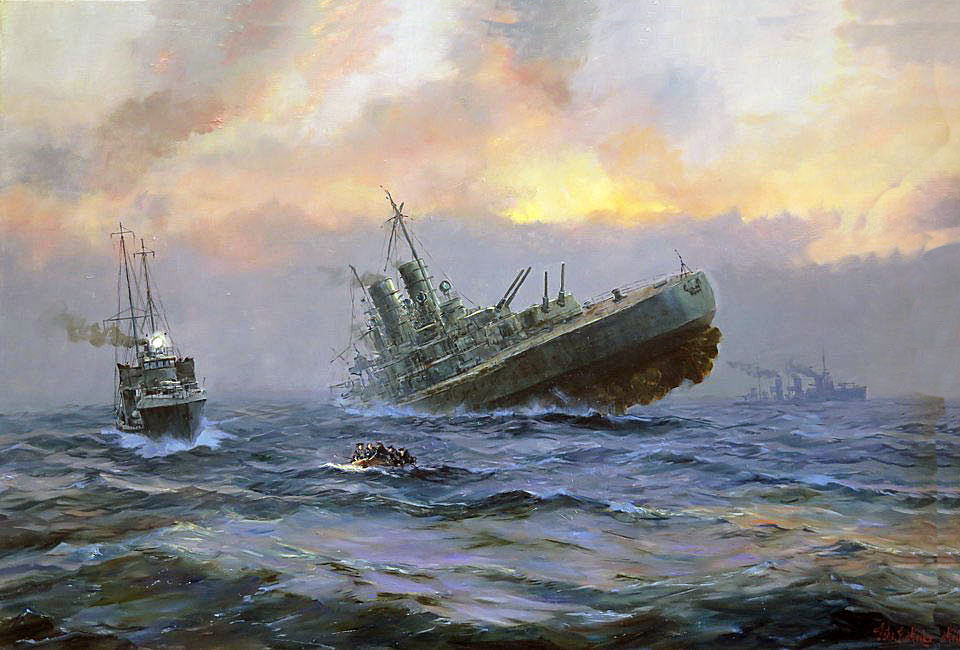 German Battle Cruiser SMS Lützow sinking after being scuttled by a torpedo fired from a German vessel at the Battle of Jutland on 31st May 1916: picture by Moller 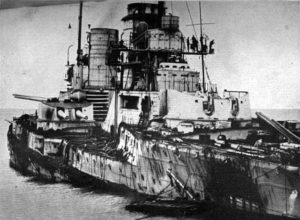 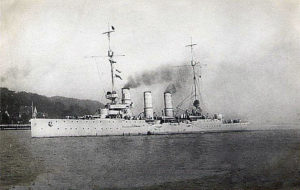 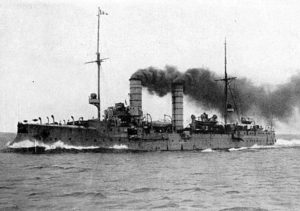 TOTALS of German casualties at the Battle of Jutland 31st May 1916:

Knighthoods and appointments to the orders of chivalry associated with the armed services were made to officers who had distinguished themselves in the battle.

Victoria Crosses (four) were awarded for conduct at the Battle of Jutland to: 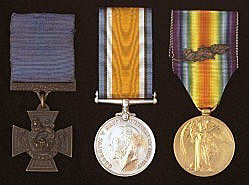 Commander Bingham captain of the Destroyer HMS Nestor of HMS Champion’s 13th Flotilla for the attack on the German Battle Cruisers early in the Battle of Jutland.  Bingham was captured with the survivors of his crew (see Battle of Jutland Part II). 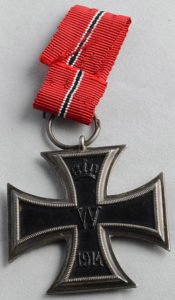 Some 40 Distinguished Service Orders were awarded to Royal Navy and Royal Marines Officers.

Some 13 Distinguished Service Crosses were awarded to Royal Navy and Royal Marines Officers including Flight Lieutenant Frederick Rutland the pilot of the Short 184 Seaplane that conducted the initial air reconnaissance and who subsequently rescued the wounded sailor from HMS Warrior and to Lieutenant Cuthbert Coppinger RN Navigating Officer of HMS Canterbury (see ‘Coppinger of Jutland’).

Some 65 Distinguished Service Medals were awarded to non-commissioned ranks including DSMs to the survivors of the crew from HMS Shark P/O Griffin, P/O Fillend and A/Bs Hope, Smith, Howell and Stoker Swan who were picked up by a Danish merchant ship (see Battle of Jutland Part III).

A large number of French and Russian awards were made to all ranks. 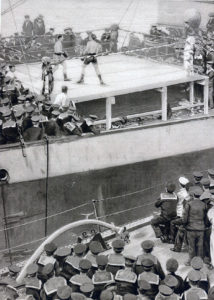 References for the Battle of Jutland:

The Great War Volume 7 by Wilson and Hammerton

History of the Royal Navy World War I by Farquharson-Roberts

Times History of the Great War

The Fighting at Jutland by Fawcett and Hooper 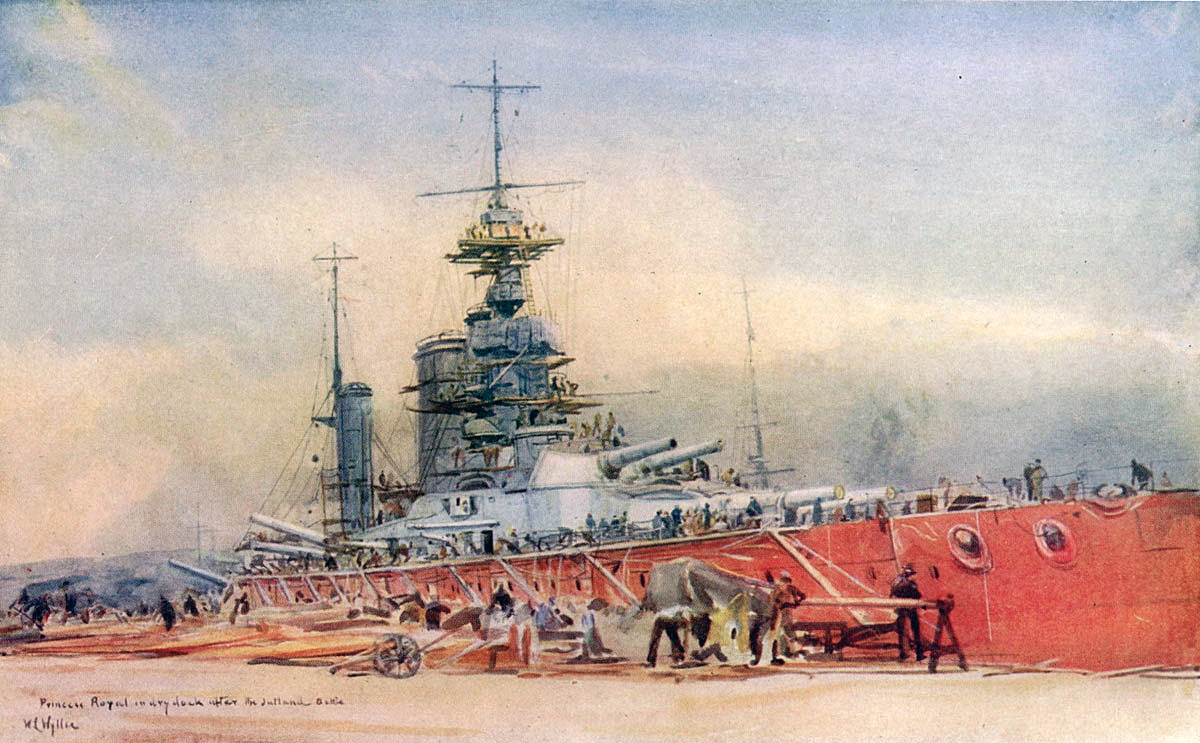 British Battle Cruiser HMS Princess Royal in dry dock after the Battle of Jutland 31st May 1916: picture by Lionel Wyllie

The previous battle of the First World War is the Battle of Jutland Part IV: the Night Action 31st May to 1st June 1916

To the First World War Index