The third unsuccessful attempt by Buller to push across the Tugela River and relieve Ladysmith, fought on 5th February 1900 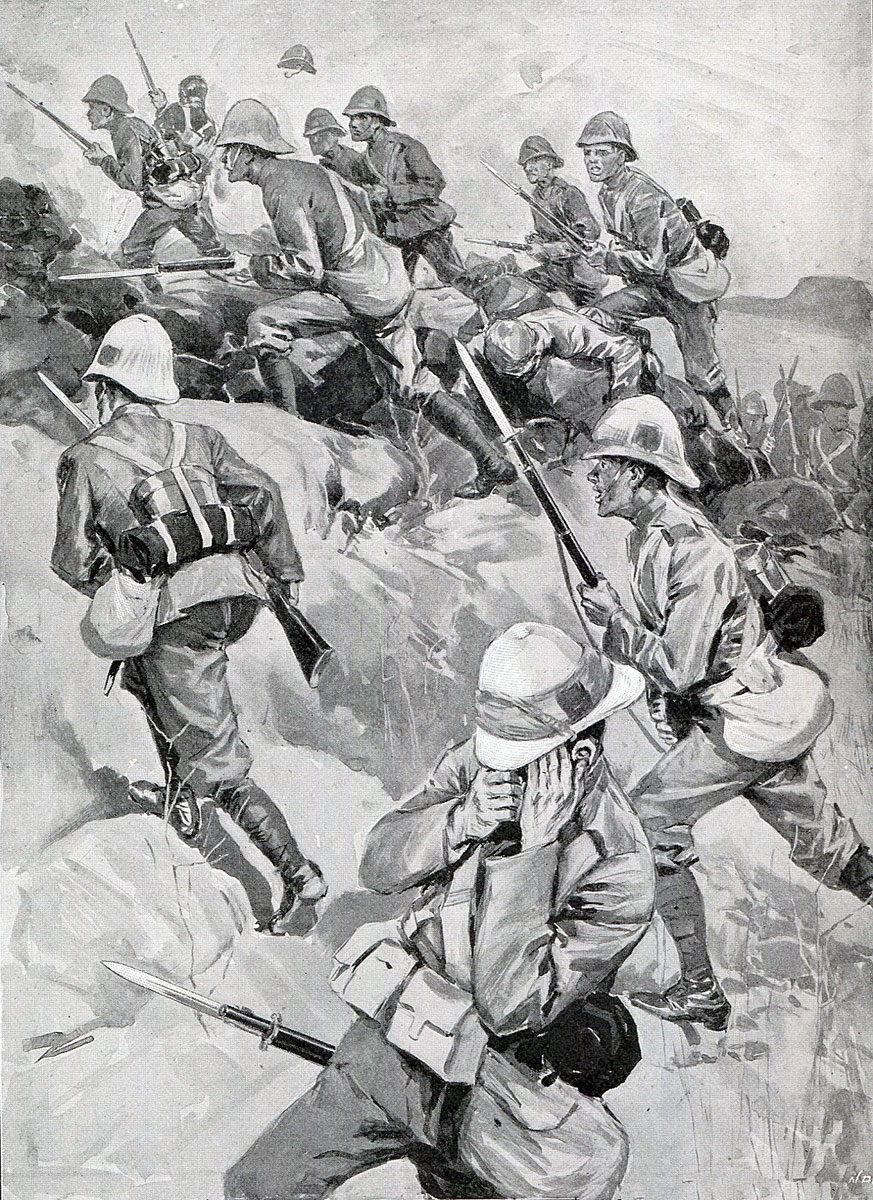 1st Durham Light Infantry attacking up Val Krantz: at the Battle of Val Krantz on 5th February 1900 in the Boer War: picture by Oscar Eckhardt

Date of the Battle of Val Krantz: 5thFebruary 1900

Place of the Battle of Val Krantz: On the Tugela River, Northern Natal, in South Africa.

Combatants at the Battle of Val Krantz: British against the Boers. 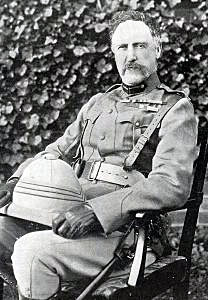 Size of the armies at the Battle of Val Krantz: 20,000 British and colonial troops against between 4,000 to 8,000 Boers, as they returned to their commandos.

Uniforms, arms and equipment at the Battle of Val Krantz: The Boer War was a serious jolt for the British Army. At the outbreak of the war, British tactics were appropriate for the use of single shot firearms, fired in volleys controlled by company and battalion officers, the troops fighting in close order. The need for tight formations had been emphasised time and again in colonial fighting. In the Zulu and Sudan Wars, overwhelming enemy numbers, armed principally with stabbing weapons, were easily kept at a distance by such tactics; but, as at Isandlwana, would overrun a loosely formed force. These tactics had to be entirely rethought in battle against the Boers armed with modern weapons. 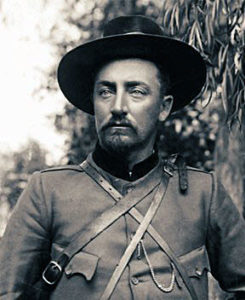 General Ben Viljoen, Boer commander on Val Krantz at the Battle of Val Krantz on 5th February 1900 in the Great Boer War

In the months before hostilities, the Boer commandant general, General Joubert, bought 30,000 Mauser magazine rifles and a number of modern field guns and automatic weapons from the German armaments manufacturer Krupp and the French firm Creusot. The Boer commandoes, without formal discipline, welded into a fighting force through a strong sense of community and dislike for the British. Field cornets led Boer burghers by personal influence, not through any military code. The Boers did not adopt military formation in battle, instinctively fighting from whatever cover there might be. Many Boers were countrymen, running their farms from the back of a pony with a rifle in one hand. These rural Boers brought a life time of marksmanship to the war, an important edge, further exploited by Joubert’s consignment of German magazine rifles. Viljoen is said to have coined the aphorism ‘Through God and the Mauser’ to describe the national inspiration. With strong fieldcraft skills and high mobility, the Boers were natural mounted infantry. The urban burghers and foreign volunteers readily adopted the fighting methods of their rural comrades.

Other than in the regular uniformed Staats Artillery and police units, the Boers wore their everyday civilian clothing on campaign.

After the first month of the war, the Boers lost their numerical superiority, spending the rest of the formal war on the defensive against British forces, that regularly outnumbered them.

British tactics, used at Modder River, Magersfontein, Colenso and Spion Kop, were incapable of winning battles against entrenched troops armed with modern magazine rifles. Every British commander made the same mistake; Buller; Methuen, Roberts and Kitchener. When General Kelly-Kenny attempted to winkle Cronje’s commandoes out of their riverside entrenchments at Paardeberg using his artillery, Kitchener intervened and insisted on a battle of infantry assaults; with the same disastrous consequences as in earlier battles.

Some of the most successful British troops were the non-regular regiments; the City Imperial Volunteers, the South Africans, Canadians, Australians and New Zealanders, who more easily broke from the habit of traditional European warfare, using their horses for transport rather than the charge, advancing by fire and manoeuvre in loose formations and making use of cover, rather than the formal attack in line into a storm of Mauser bullets. 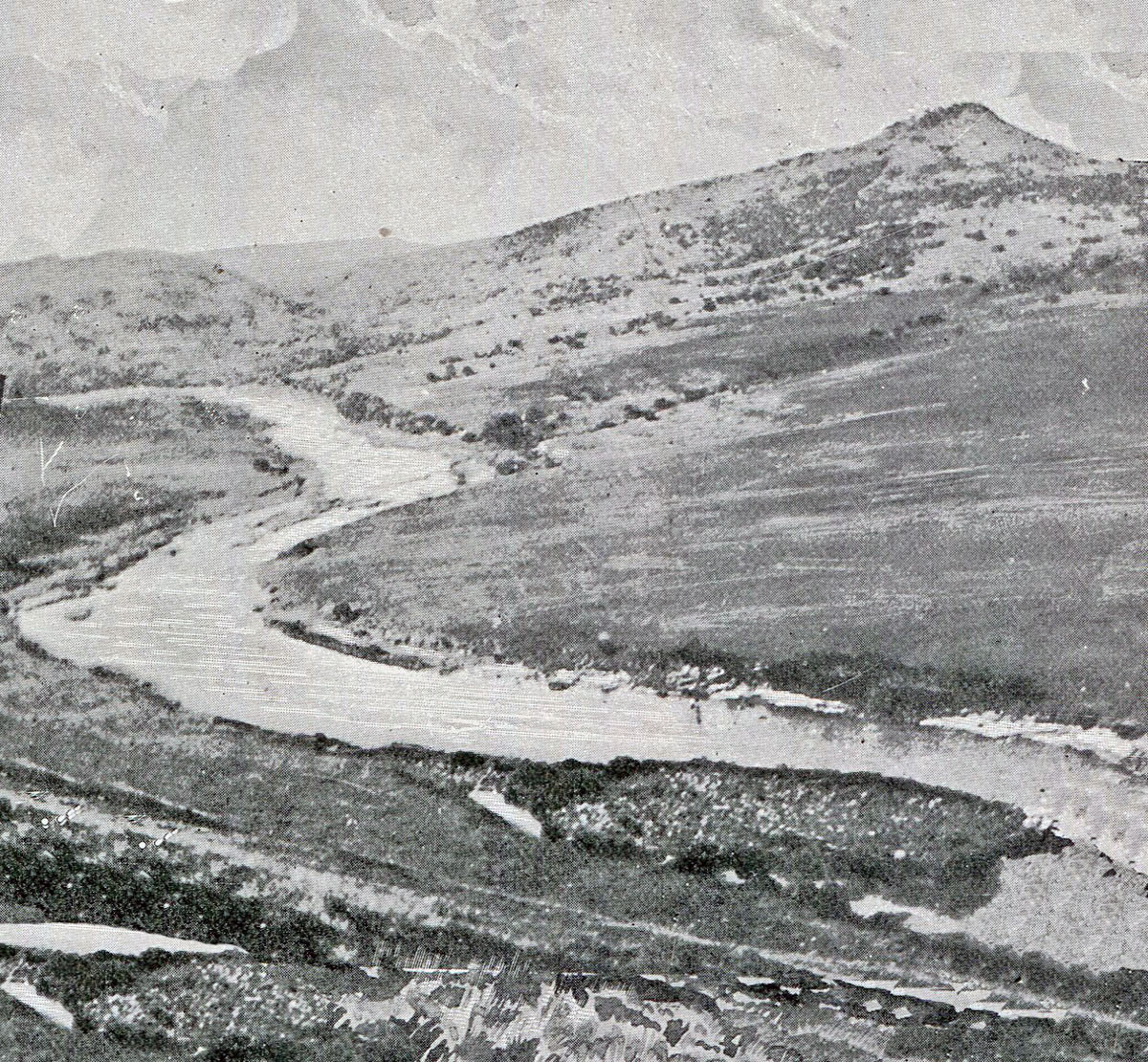 Val Krantz viewed across the Tugela River: Battle of Val Krantz on 5th February 1900 in the Great Boer War

Uniforms, equipment and training: The British regiments made an uncertain change into khaki uniforms in the years preceding the Great Boer War, with the topee helmet as tropical headgear. Highland regiments in Natal devised aprons to conceal coloured kilts and sporrans. By the end of the war, the uniform of choice was slouch hat, drab tunic and trousers. The danger of shiny buttons and too ostentatious emblems of rank was emphasised in several engagements with disproportionately high officer casualties.  From early in the war many British officers stopped wearing their swords and carried rifles, to make themselves less conspicuous to Boer marksmen.

The British infantry were armed with the Lee-Metford magazine rifle, firing 10 rounds. But no training regime had been established to take advantage of the accuracy and speed of fire of the weapon. Personal skills such as scouting and field craft were little taught. The idea of fire and movement was unknown, many regiments still going into action in close order. 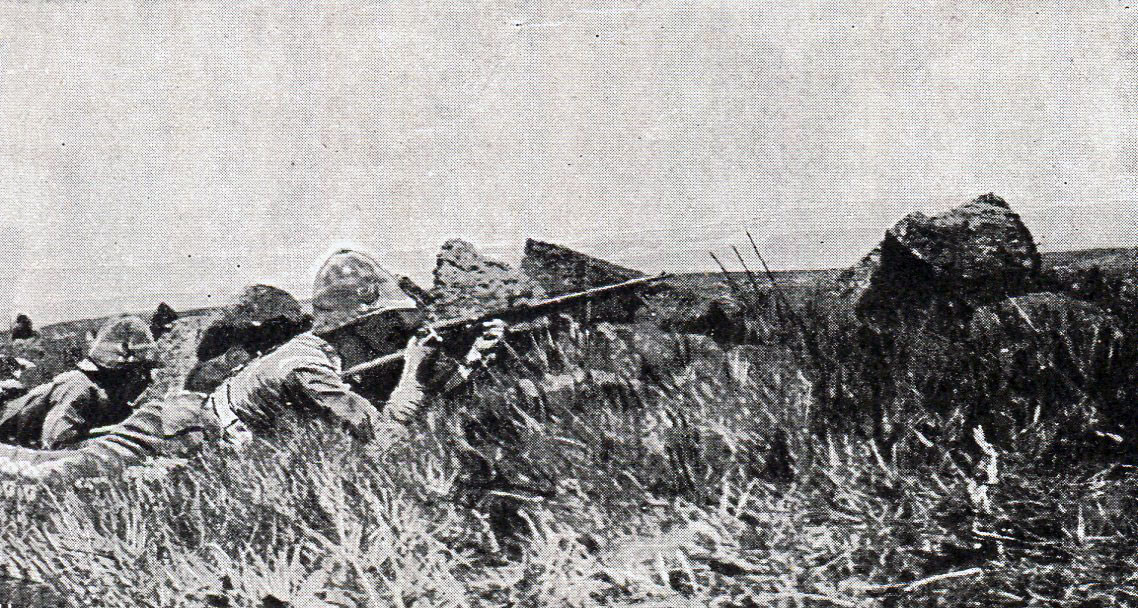 Notoriously, General Hart insisted that his Irish Brigade fight shoulder to shoulder, as if on parade in Aldershot. Short of regular troops, Britain engaged volunteer forces from Britain, Canada, Australia and New Zealand, who brought new ideas and more practical formations to the battlefield.

The British regular troops lacked imagination and resource. Routine procedures such as effective scouting and camp protection were often neglected. The war was littered with incidents in which British contingents became lost or were ambushed, often unnecessarily, and forced to surrender. The war was followed by a complete re-organisation of the British Army.

The British artillery was a powerful force in the field, underused by commanders with little training in the use of modern guns in battle. Pakenham cites Pieters as being the battle at which a British commander, surprisingly Buller, developed a modern form of battlefield tactics: heavy artillery bombardments, co-ordinated to permit the infantry to advance under their protection. It was the only occasion that Buller showed any real general ship and the short inspiration quickly died. 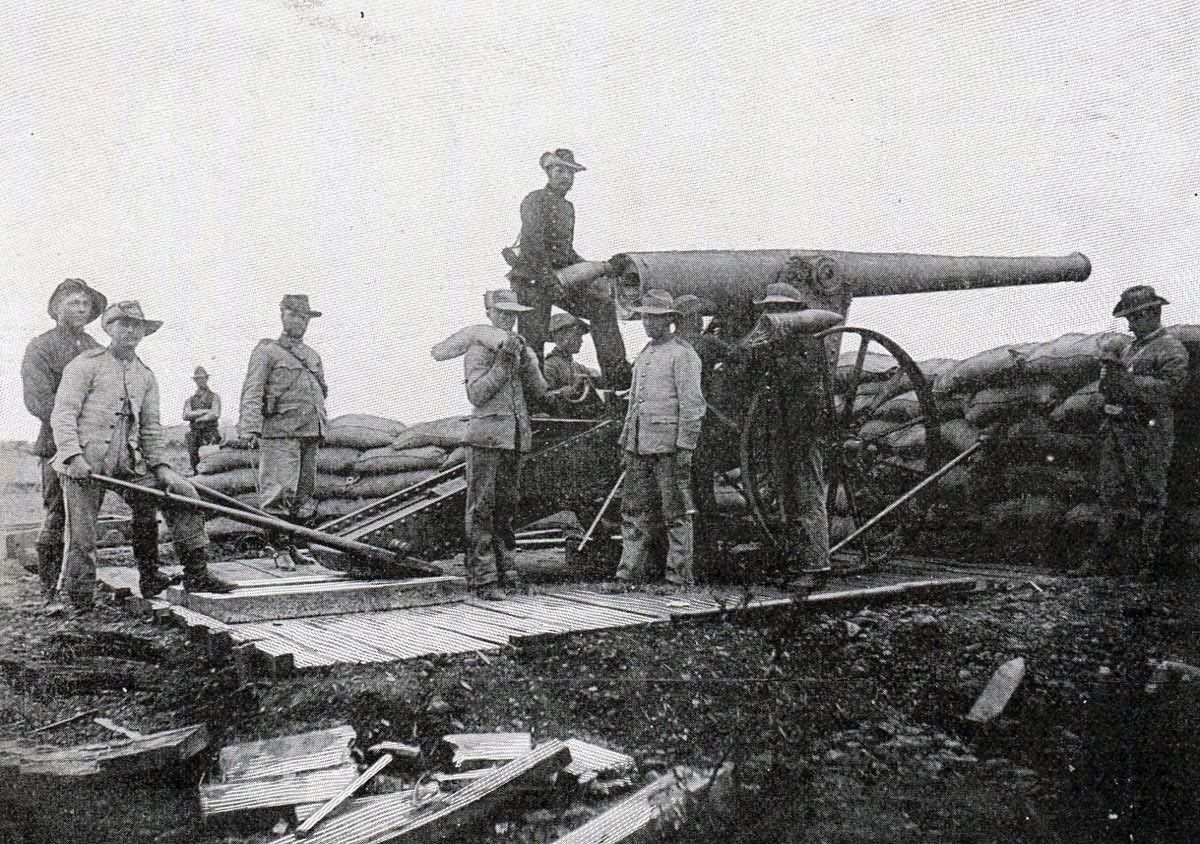 Automatic weapons were used by the British, usually mounted on special carriages accompanying the cavalry.

Winner of the Battle of Val Krantz: Finally, the British.

British Order of Battle at the Battle of Val Krantz: 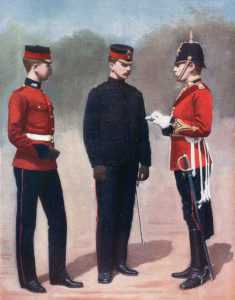 Squadron of the 14th Hussars
7th, 14th and 66th Batteries, Royal Field Artillery (less the ten guns lost at the Battle of Colenso) 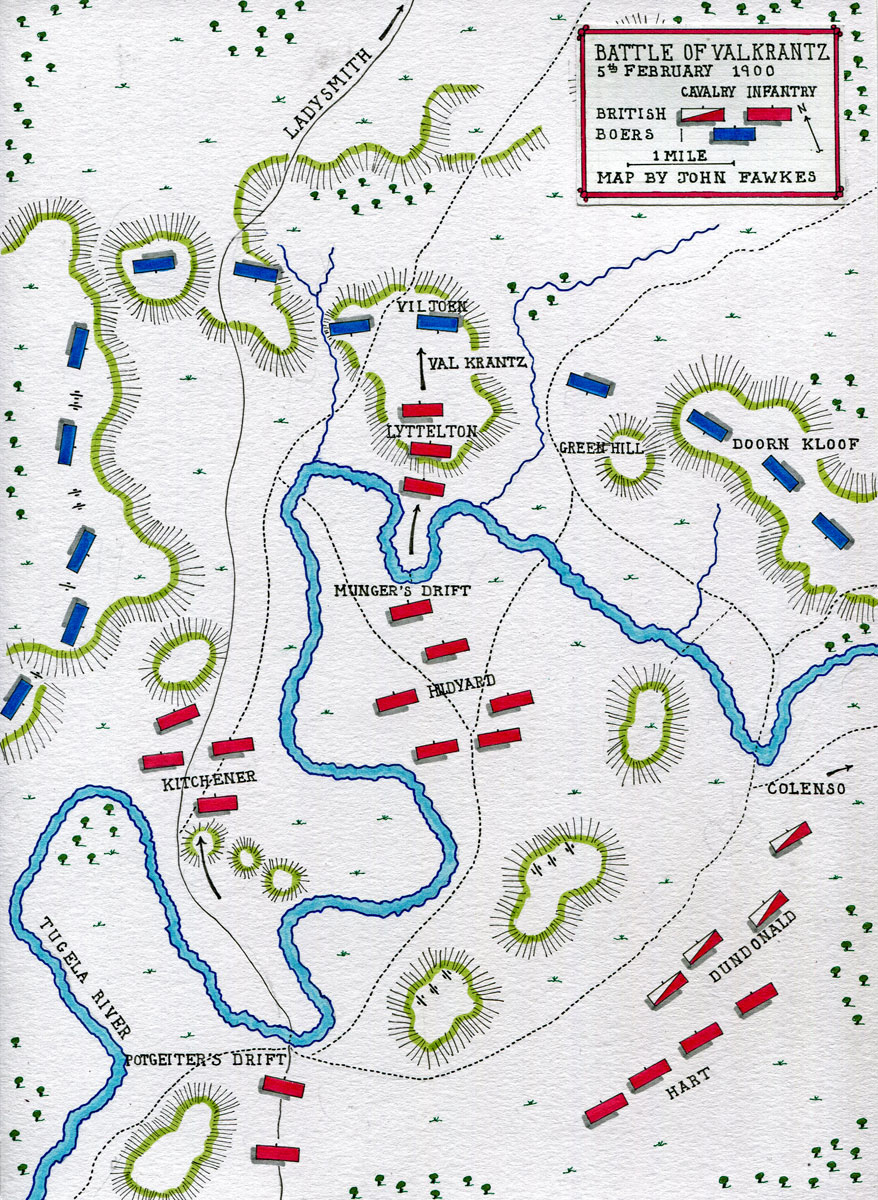 Map of the Battle of Val Krantz on 5th February 1900 in the Great Boer War: map by John Fawkes

Account of the Battle of Val Krantz:
In October 1899, Lieutenant General Sir Redvers Buller arrived in South Africa as the new British commander-in-chief against the Boers.

Buller was an old South Africa hand and urged that, until reinforcements arrived for the outnumbered garrison, the British troops should remain well back, out of reach of the invading Boer armies. The stop gap commanders-in-chief, pending Buller’s arrival in Natal, Major General Sir Pen Symons and Lieutenant General Sir George White, ignored this advice. Symons took the outnumbered British force across the Tugela into the northern tip of Natal. White, on taking over with the death of Symons, failed to pull the force back swiftly enough in the face of the Boer invasion of Natal. 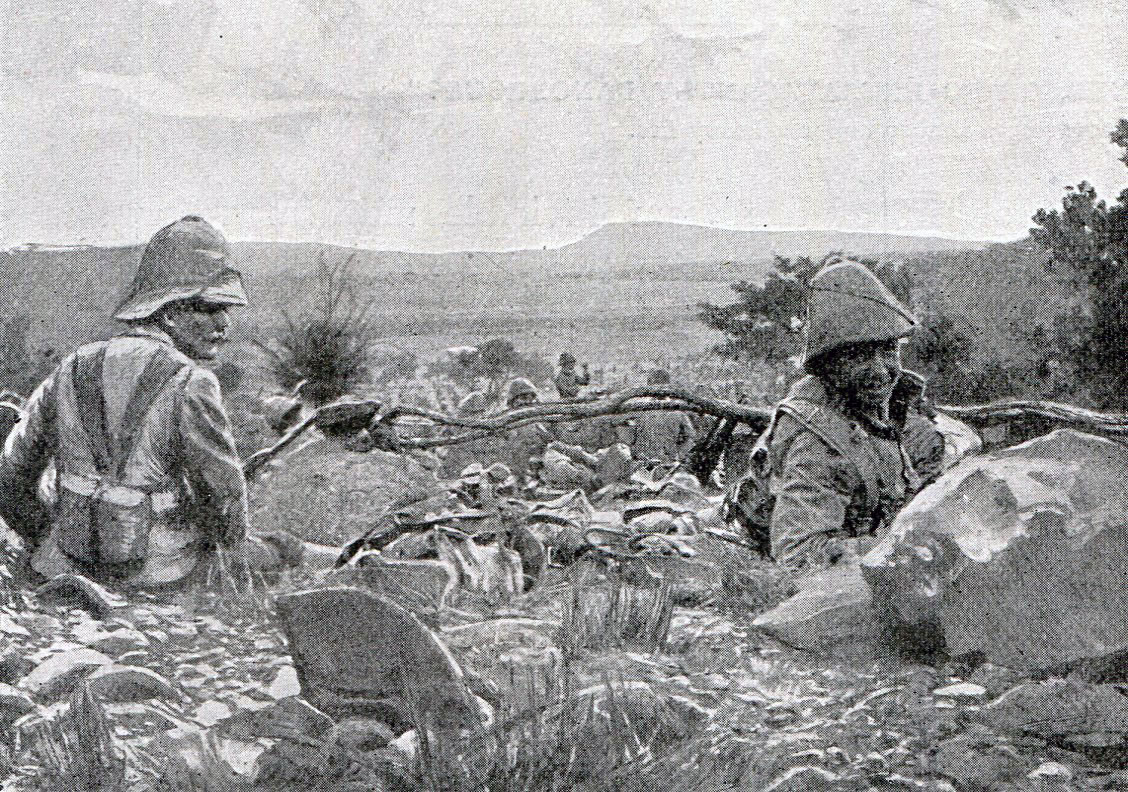 All freedom of movement was lost to Buller, who incurred the overwhelming obligation of relieving the British troops in Ladysmith; it being inconceivable that they surrender.

Buller’s task was to storm the Boer positions on the banks of the Tugela and fight on into Ladysmith; no easy undertaking in the face of thousands of determined Transvaal and Orange Free State nationalists, well entrenched on the river banks and hills, armed with modern artillery and magazine rifles, that they used with great expertise.

Buller’s first attempt to force the Tugela River positions came to grief at Colenso on 15thDecember 1899.  His second attempt was notoriously defeated at Spion Kop on 24th January 1900.

Buller’s third attempt was at Val Krantz, on the left flank of the Boer positions around Spion Kop, beginning in the early hours of 5th February 1900. 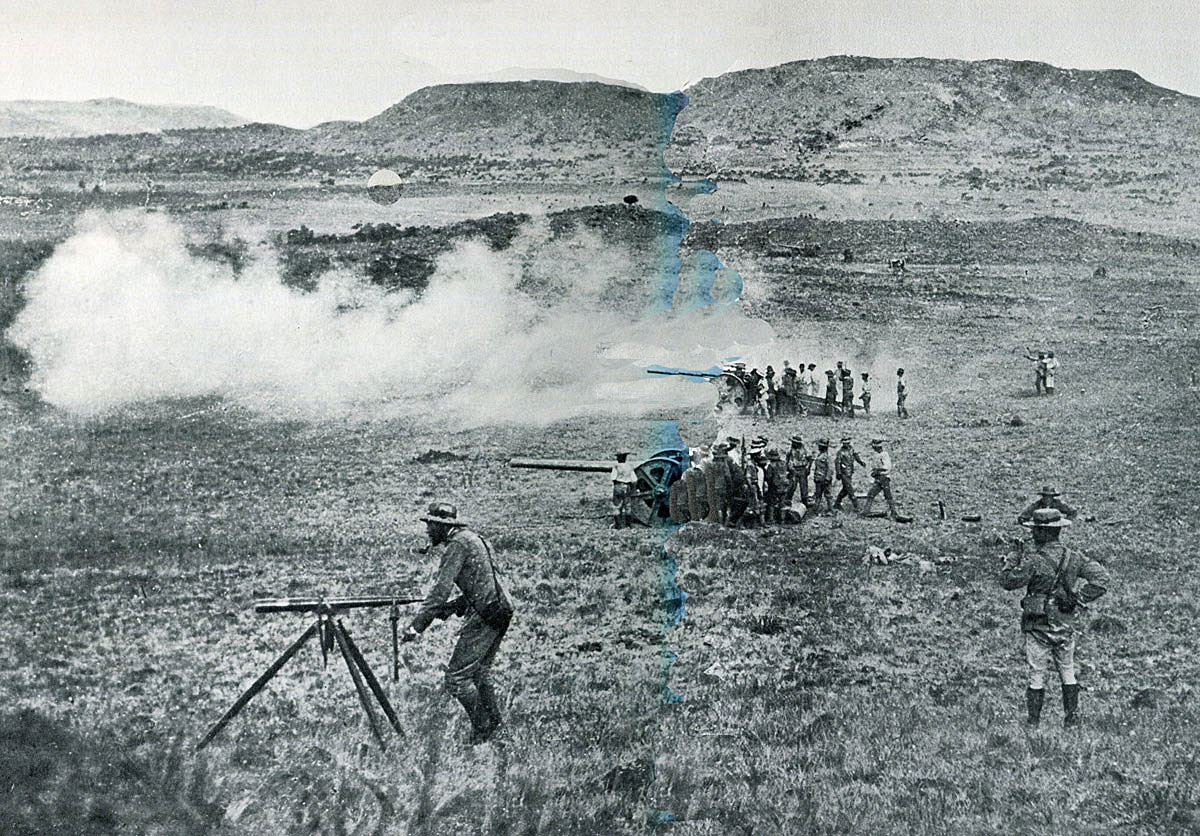 Royal Navy 4.7 inch guns firing at the Boer positions in the Battle of Val Krantz on 5th February 1900 in the Great Boer War

The British long-range naval guns shelled the line of kops on the far bank of the Tugela River while the Lancashire Brigade demonstrated across the river at Potgeiter’s Drift.

The real attack force, Lyttelton’s Fourth Brigade, crossed by a pontoon bridge at Munger’s Drift, a mile to the east of Potgeiter’s and headed for Val Krantz, a hill at the bend in the river.

The deliberate slowness with which Buller permitted Lyttelton’s force to begin the attack and the sight of the single pontoon bridge being assembled at Munger’s Drift gave the Boers ample warning that the true line of assault was up onto Val Krantz. 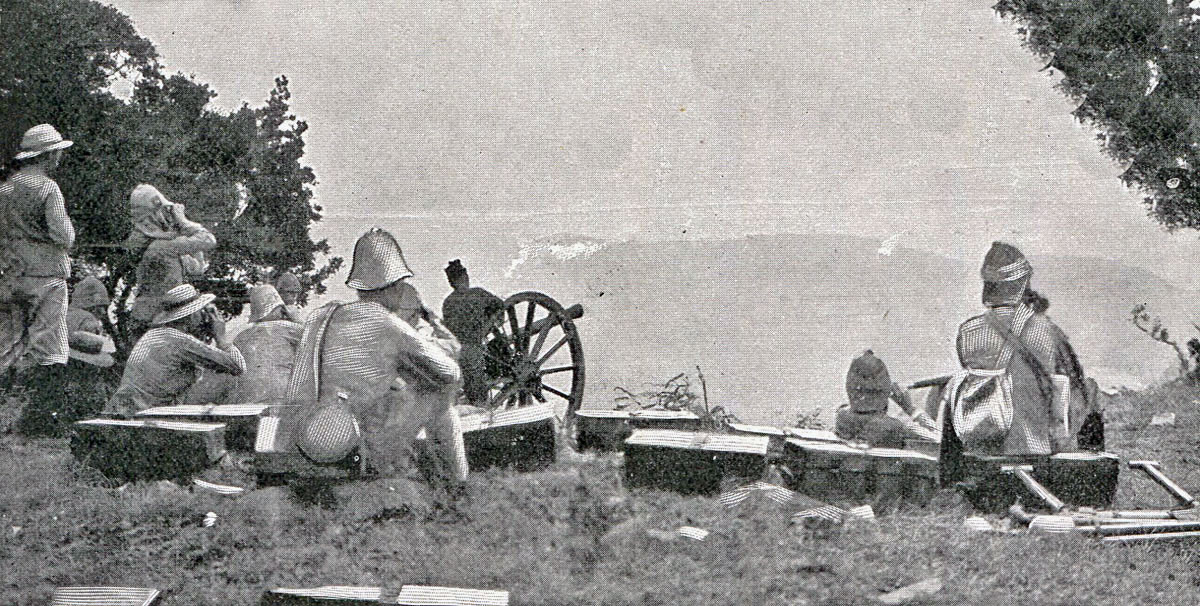 The initial plan was for Hildyard’s Brigade of 2nd East Surreys, 2nd Queen’s West Surreys, 2ndDevons, and 2nd West Yorkshires to cross the Tugela River immediately after Lyttelton and storm Green Hill. The cavalry brigade would then cross and make for Ladysmith followed by Hart’s brigade. But the ever-hesitant Buller lost all confidence in the attack as Lyttelton crossed and cancelled the order to Hildyard to cross the river, leaving Lyttelton to make the assault alone.

The Boers, only some 1,200 in number, were led by Viljoen in a spirited defence of Val Krantz, while the Boer rifle and artillery fire built up from the surrounding hills. The Boers were in considerable difficulty. The spectacular success of the Battle of Spion Kop, reminiscent of the Boer victory on the hilltop in the First Boer War, Majuba Hill, persuaded the Boers, including General Botha, that the British would now sue for peace, as they had in 1881 and many Boers had gone home. Hurrying back in the face of the threat of a further attack by Buller, they arrived during the days of Val Krantz and afterwards. 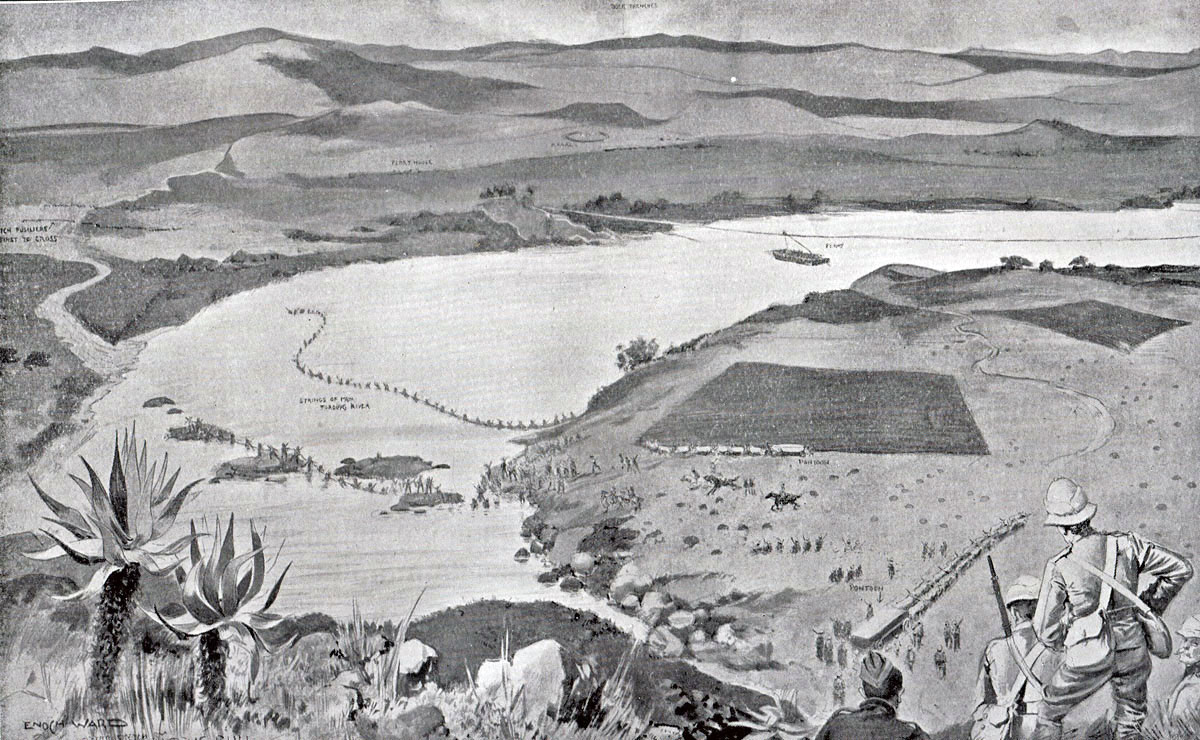 Buller’s reaction to the stiffening resistance was to order Lyttelton to abandon the attack and retreat. Lyttelton ignored the order and called for reinforcements.

Lyttelton urged Buller, in particular, to bring more troops across the river and attack Doorn Kloof, the hill position on his right flank. But Buller convinced himself the Boer positions were too strong to be forced. The most Buller would risk was to reinforce Lyttelton with Hildyard’s brigade.

At dawn on 6th February 1900, the Boer artillery began a heavy bombardment with guns that had been brought up during the night. 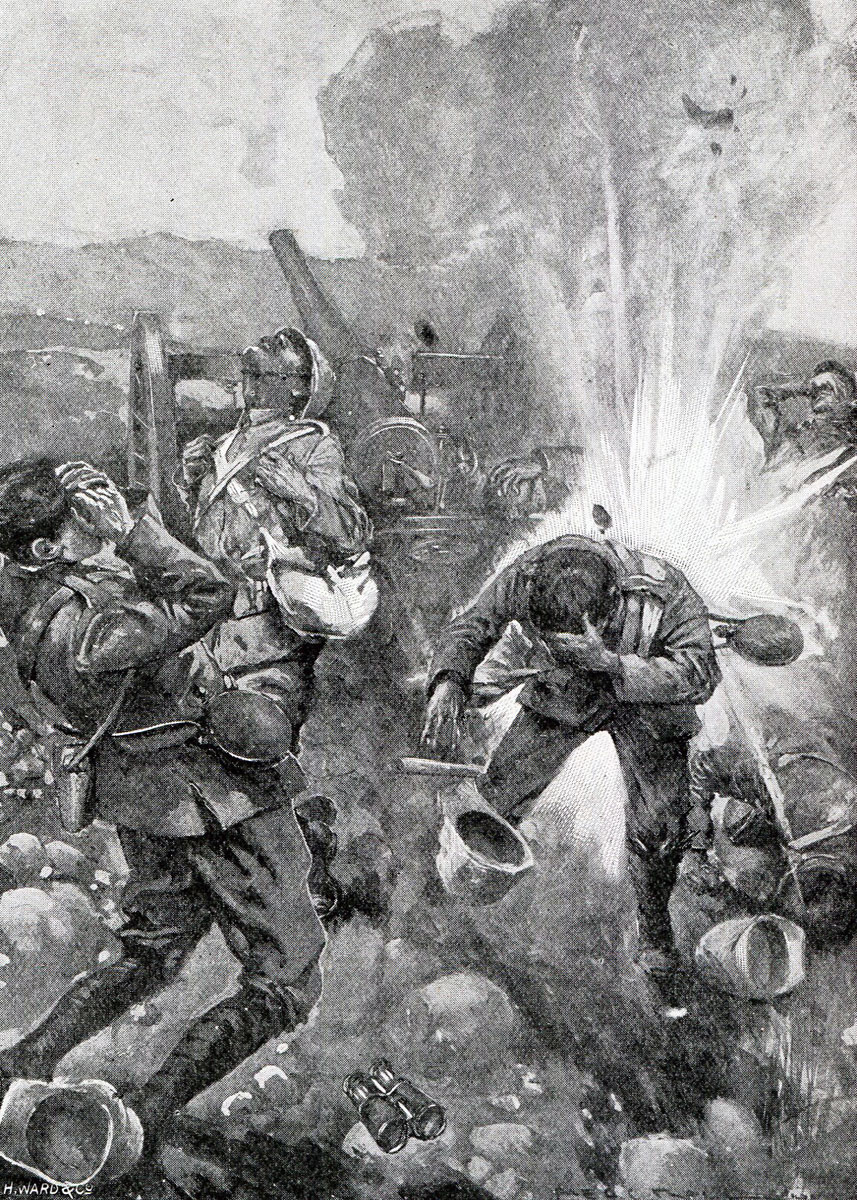 British guns under fire at the Battle of Val Krantz on 5th February 1900 in the Great Boer War: picture by H. Ward

Lyttelton and other generals urged Buller he had to commit more troops and expand the position by attacking Doorn Kloof. A council of war was held, but Buller could not be persuaded to take the risk.

On the Thursday night. the operation was abandoned and the British troops withdrew across the Tugela River, ending the battle known as Val Krantz.

The British suffered 400 casualties and Buller attracted the nicknames of ‘the Tugela Ferryman’ and ‘Sir Reverse Buller.’ 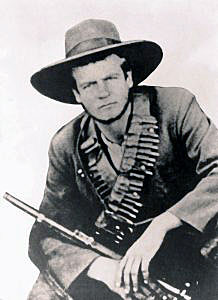 Anecdotes from the Battle of Val Krantz:

References for the Battle of Val Krantz:

The Boer War is widely covered. A cross section of interesting volumes would be:

The Boer War by Thomas Pakenham

Books solely on the fighting in Natal:

For a view of the fighting in Natal from the Boer perspective: