You are here: Home / Second Afghan War / Battle of Futtehabad

The iconic engagement for the Queen’s Corps of Guides with the death of Major Wigram Battye, fought on 2nd April 1879 in the Second Afghan War 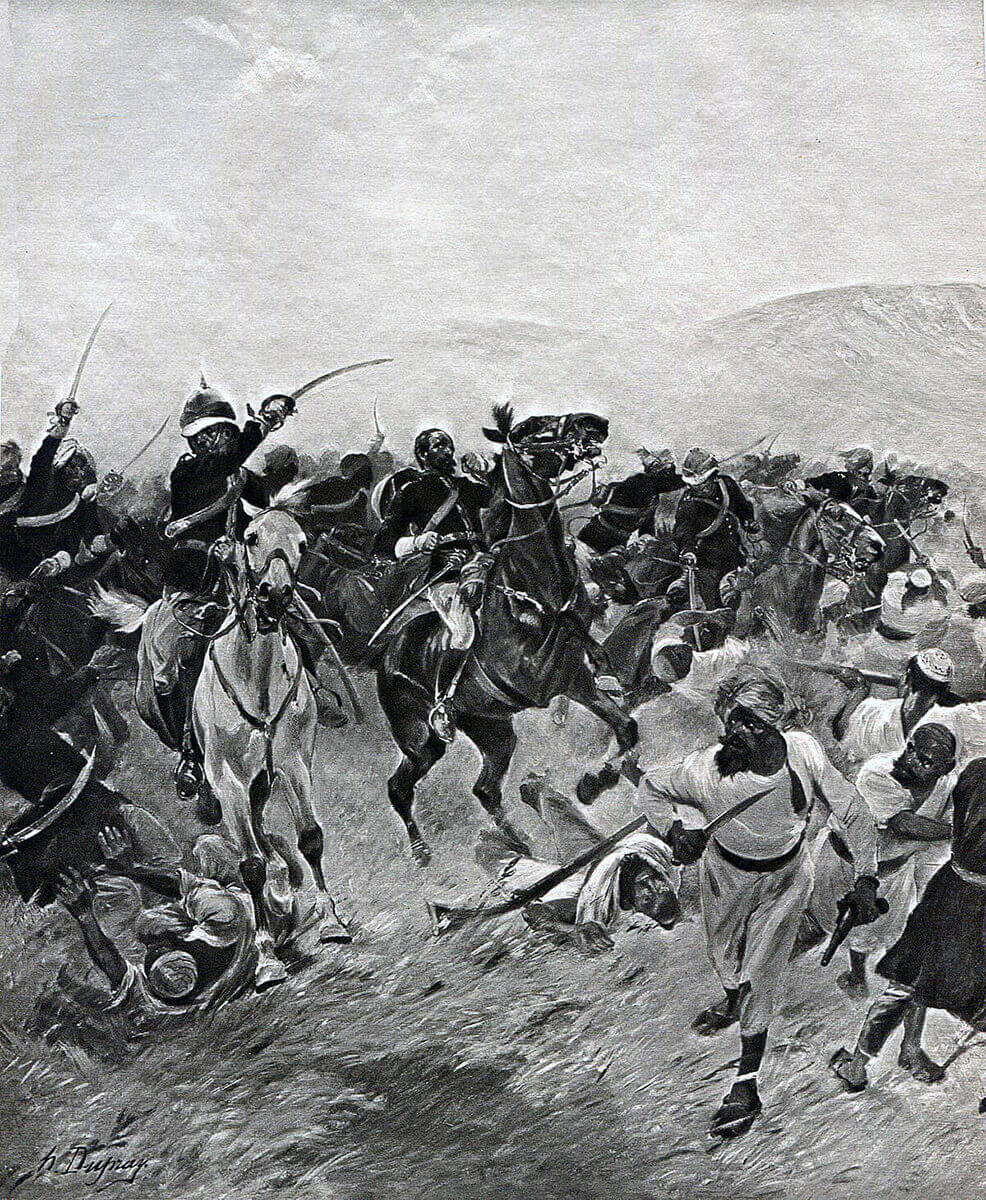 Death of Major Wigram Battye of the Queen’s Own Corps of Guides at the Battle of Futtehabad on 2nd April 1879 in the Second Afghan War: picture by Henri Dupray

Date of the Battle of Futtehabad: 2nd April 1879

Place of the Battle of Futtehabad: South West of Jellalabad in North Eastern Afghanistan.

Combatants at the Battle of Futtehabad: British and Indian troops against Khugiani and other Afghan tribesmen.

Generals at the Battle of Futtehabad: Brigadier General Gough against unknown tribal leaders.
Size of the armies: 1,000 British and Indian troops against 5,000 Khugiani tribesmen.

Uniforms, arms and equipment at the Battle of Futtehabad:
The British and Indian forces were made up, predominantly, of native Indian regiments from the armies of the three British presidencies, Bengal, Bombay and Madras, with smaller regional forces, such as the Hyderabad contingent, and the newest, the powerful Punjab Frontier Force. 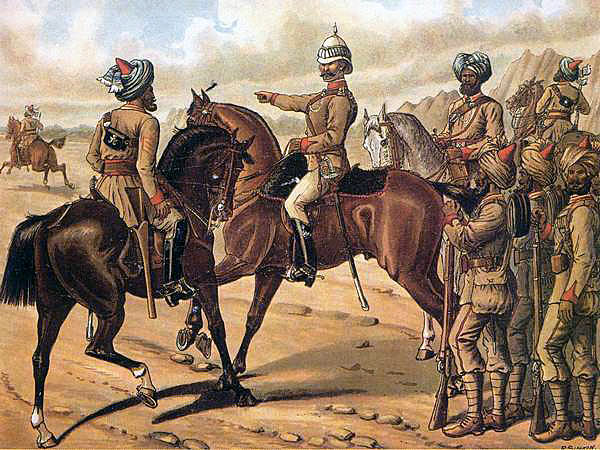 Queen’s Own Corps of Guides: Battle of Futtehabad on 2nd April 1879 in the Second Afghan War: picture by Richard Simkin 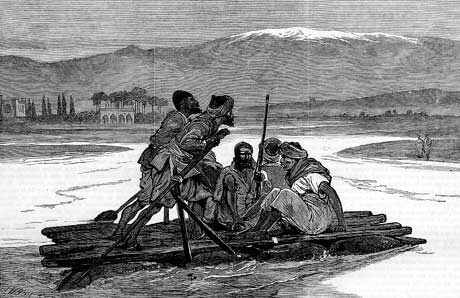 Crossing the Kabul River: Battle of Futtehabad on 2nd April 1879 in the Second Afghan War 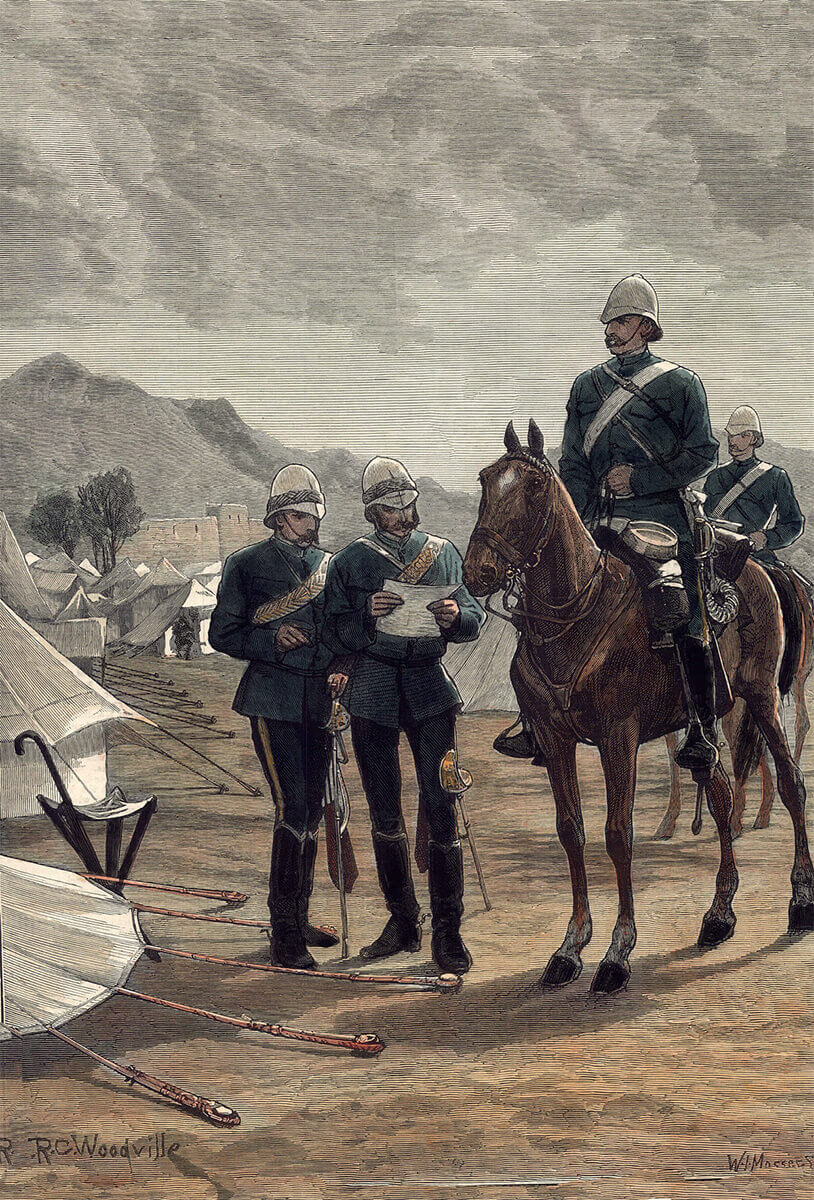 Winner of the Battle of Futtehabad: The British and Indian force. 10th Royal Hussars on exercise in England after the war: Battle of Futtehabad on 2nd April 1879 in the Second Afghan War: picture by Orlando Norie Map of the the Battle of Futtehabad on 2nd April 1879 in the Second Afghan War: map by John Fawkes

Account of the Battle of Futtehabad:
The battle at Futtehabad was a classic example of late Victorian colonial warfare; a small, but well-armed and disciplined force led with courage and resource against fanatical tribesmen, enraged at the incursions into their lands by foreigners.

The battle was also symptomatic of the difficulties faced by the three British/Indian Field Forces invading Afghanistan in the Second Afghan War: the Peshawar Valley Field Force, the Kurrum Field Force and the South Afghanistan Field Force. The field forces captured fixed positions along the routes of invasion with relative ease; the most determined resistance coming from the tribesmen raiding communications links to India. The hard lesson was that Afghan tribesmen never stop attacking an invader.

Following the successful battle at Ali Masjid at the head of the Khyber Pass in November 1878, the Peshawar Valley Field Force, commanded by Lieutenant General Sir Sam Browne, advanced to the Afghan town of Jellalabad on the Kabul River. There the invasion of Afghanistan halted over the winter, while the British gathered their resources for the final advance on Kabul and waited for the Ameer of Afghanistan to sue for peace.

The substantial army in Jellalabad and its supply line suffered frequent attacks by the Afghan tribes in the area; the tribesmen, at the best of times troublesome subjects to the Ameer of Afghanistan, seizing every opportunity to attack the foreign invaders.

At the end of March 1879, General Browne received intelligence that a force of some 1,500 Afghan tribesmen was present in the area known as the Laghman, on the north bank of the Kabul River, to the west of Jellalabad, intent on inflaming local tribes against the British and Indian force.

Simultaneously, the Kugiani tribe was reported to be assembling in the area of Futtehabad, to the south-west of Jellalabad. The two threats appeared to be coordinated.

General Browne sent out three forces from Jellalabad: the first comprising a squadron of 10th Hussars and a squadron of 11th Bengal Cavalry, to cross the Kabul River to the east of Jellalabad and march west and surprise the Afghans in the Laghman: the second force, under Brigadier General Macpherson, to march west along the south bank of the river and cut off the southward retreat of the Afghans from Laghman.

The third force under Brigadier General Gough would deal with the Kugianis at Futtehabad. 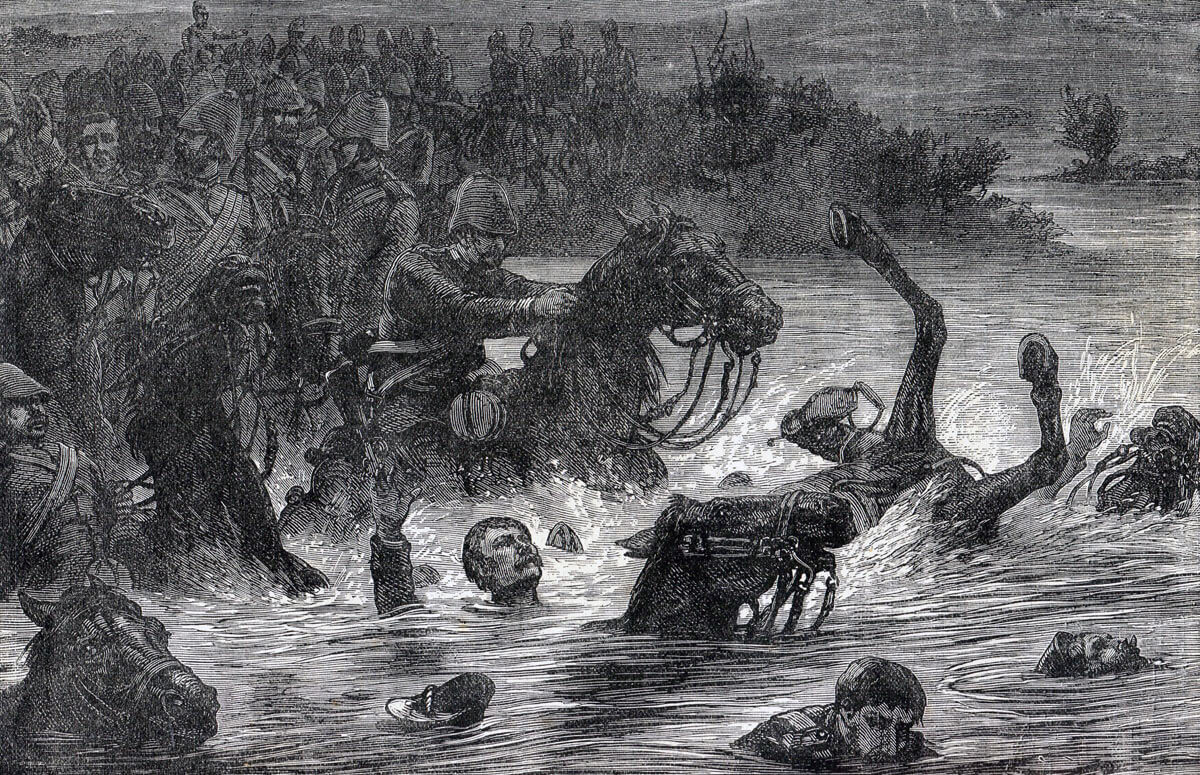 10th Royal Hussars in trouble in the Kabul River on 31st March 1879: Battle of Futtehabad on 2nd April 1879 in the Second Afghan War

Macpherson’s force and the cavalry marched out of Jellalabad on 31st March 1879. The cavalry route across the Kabul River was by a ford; about a mile across, via an island, its path far from obvious. In the second section of the river the squadron of the 10th Hussars lost its way and floundered into fast deep water. 47 officers and men of the squadron of 75 all ranks were swept away and drowned, a substantial loss. A second squadron of the regiment was sent out from Jellalabad and the force continued on its march, only to find when it reached the Laghman that the Afghan force had disappeared. 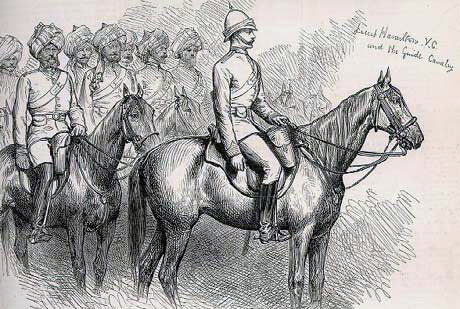 Brigadier General Gough’s force marched out in the early hours of 1st April 1879; comprising 2 squadrons of 10th Hussars and Guide’s Cavalry, 400 men of HM 17th Foot, 300 men each of the 27th and 45th Bengal Native Infantry and 4 guns of the Royal Horse Artillery.

Soon after dawn on 1st April 1879, a cavalry patrol reported a gathering of 5,000 hostile Kugiani tribesmen at the village of Khuja to the South of Futtehabad. Gough left a force of infantry to protect his supply column and advanced to the attack, notwithstanding that his force was outnumbered five to one. 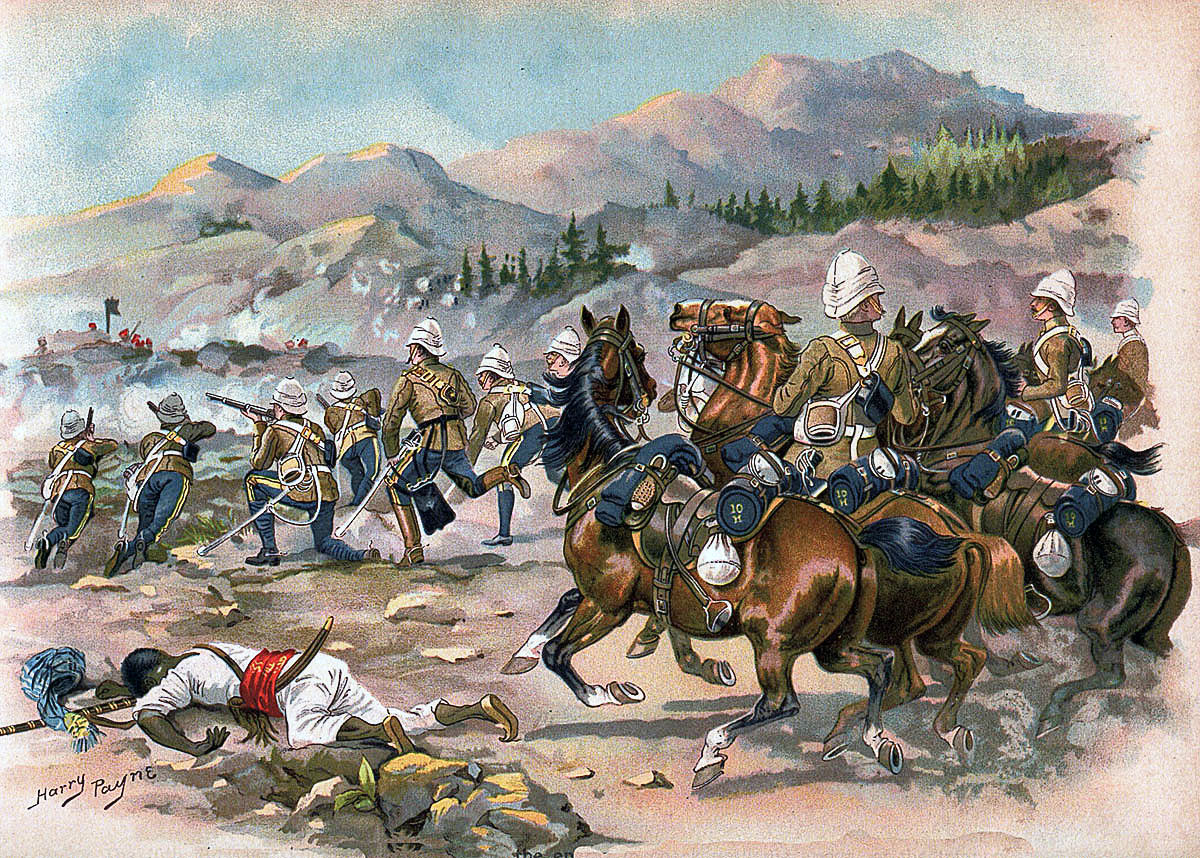 HM 10th Royal Hussars at the Battle of Futtehabad on 2nd April 1879 in the Second Afghan War: picture by Harry Payne

Gough found the Kugiani tribesmen entrenched behind an extensive sanger wall at the top of a long sloping escarpment, each flank of the approach blocked by an impassable mountain torrent.

The immutable doctrine of warfare against native forces in India was that the British/Indian force must attack whatever the odds. If they showed weakness, every tribe in the area would rise. 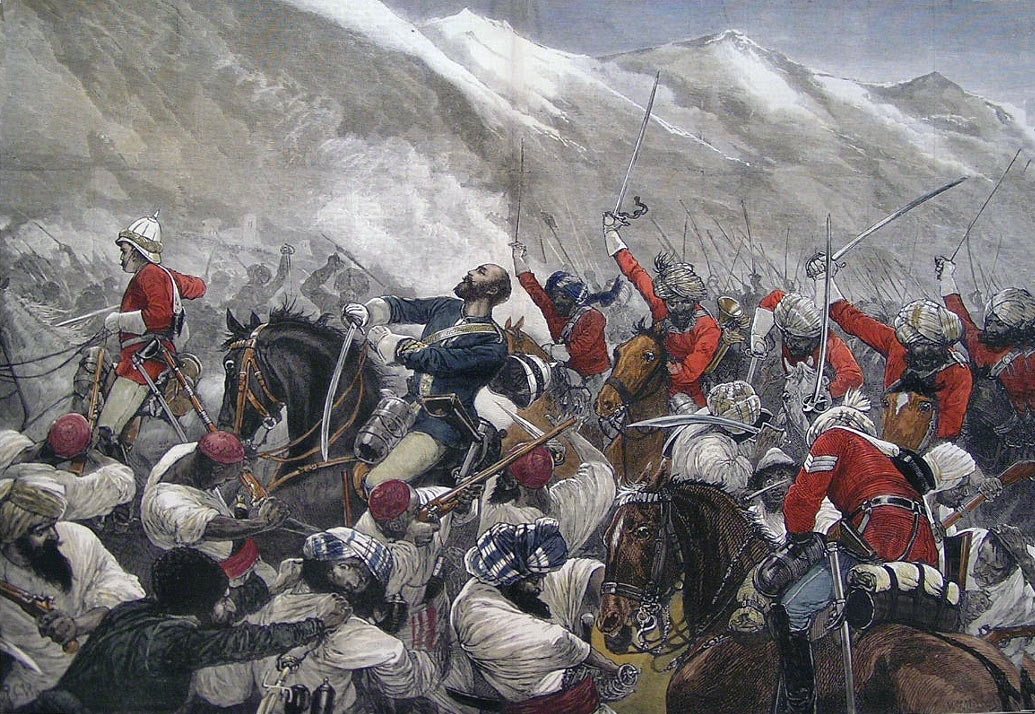 Death of Major Wigram Battye of the Queen’s Own Corps of Guides at the Battle of Futtehabad on 2nd April 1879 in the Second Afghan War: picture by Richard Caton Woodville

Gough sent forward his small cavalry force with the Royal Horse Artillery guns. Gunfire was opened on the Afghans at 1,600 yards and again at 1,200 yards. The force then withdrew. The effect on the Kugianis was as Gough had planned: they emerged from the fortified position and pursued the cavalry and guns, hurrying past the waiting infantry positioned on their right flank. A heavy fire was opened on the tribesmen and the cavalry turned and charged the Afghans, driving the tribesmen back, in headlong retreat. 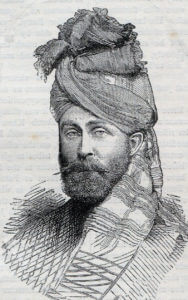 Major Wigram Battye, Queen’s Own Corps of Guides, killed at the Battle of Futtehabad on 2nd April 1879 in the Second Afghan War

In the course of the charge, Major Wigram Battye, commanding the Guides, was fatally shot in the thigh and chest. He passed command to Lieutenant Walter Hamilton. The Guides with the 10th Hussars pressed home the charge, pursuing the Kugianis back to the sanger wall and beyond. Hamilton rescued a dismounted Guides trooper from a group of tribesmen and for his part in the charge won the Victoria Cross.

The mounted soldiers were greatly impressed by the courage of the tribesmen who, when surrounded, fought to the death with whatever weapons they carried, in many cases just a knife.

Following the battle, Gough’s brigade was joined by the rest of the Second Brigade under Brigadier General Tytler and the Kugiani town of Khuja was burnt, ending the threat from the tribe for the moment.  The force then returned to Jellalabad.

Casualties at the Battle of Futtehabad:
British and Indian casualties were 6 killed and 40 wounded. The Khugianis suffered 300 dead and around 900 wounded.

Follow-up to the Battle of Futtehabad:
A number of tribesmen were made prisoner. Initially it was the requirement of the political officers with the British/Indian force that these prisoners be shot. The military officers objected. In the event a group of five mullahs was executed. 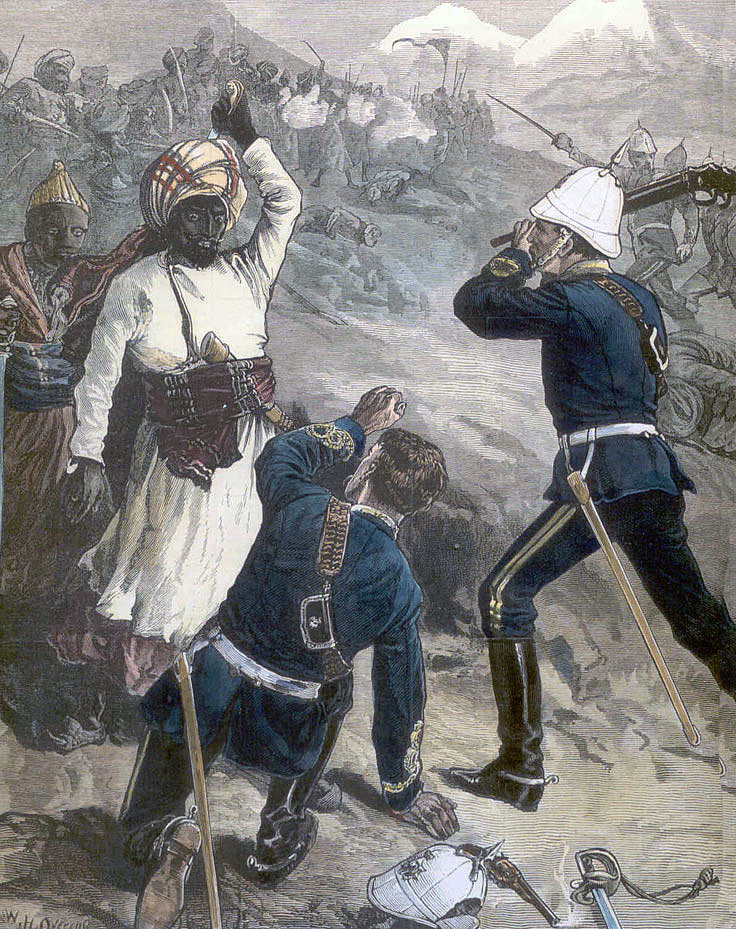 Anecdotes and traditions from the Battle of Futtehabad:

References for the Battle of Futtehabad:
The Road to Kabul; the Second Afghan War 1878 to 1881 by Brian Robson.