You are here: Home / Frederick the Great Wars / Battle of Kesselsdorf 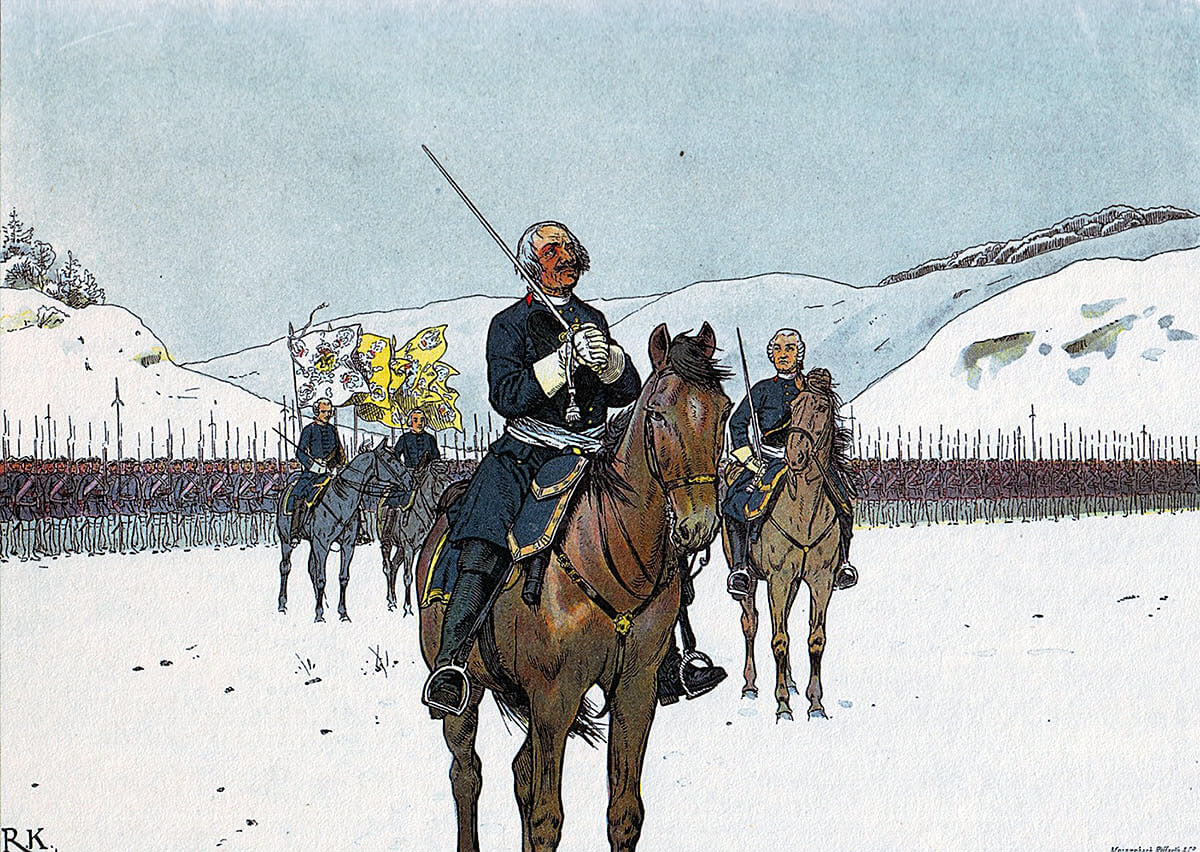 The Old Dessauer praying with his troops before the Battle of Kesselsdorf on 15th December 1747 in the Second Silesian War: picture by Richard Knotel

To the Second Silesian War index

Place of the Battle of Kesselsdorf:  On the Elbe River in Saxony, North of Dresden.

Contestants at the Battle of Kesselsdorf:  Prussians against a Saxon Army supported by an Austrian contingent.

Generals at the Battle of Kesselsdorf:  Prince Leopold Max of Anhalt-Dessau, the ‘Old Dessauer’ commanding the Prussian Army against Field Marshall Frederick Rutowsky, commanding the Saxon Army and General Grϋnne, commanding the Austrians.

Winner of the Battle of Kesselsdorf:  The Old Dessauer’s and his Prussians. 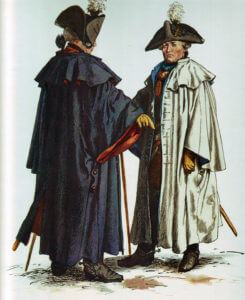 Prussian Kürassier-Regiments No 5 and 6: Battle of Kesselsdorf on 15th December 1747 in the Second Silesian War: picture by Adolph Menzel

Uniforms and equipment at the Battle of Kesselsdorf:  The Prussian infantry and artillery wore a dark blue coat turned back at the lapels, cuffs and skirts, britches and white thigh length gaiters.  From cross belts hung an ammunition pouch, bayonet and ‘hanger’ or small sword.  Headgear for the line companies was the tricorne hat with the receding front corner bound with white lace.  Grenadiers wore the distinctive mitre cap with the brass plate at the front.  Fusilier Infantry Regiments and gunners wore the smaller version of the grenadier cap.

The infantry carried the musket as their main weapon.  The single shot musket could be loaded and fired by a well trained soldier between 3 and 4 times a minute.  During the course of his wars Frederick introduced the iron ramrod and then the reversible ramrod which increased the efficiency of his infantry, the wooden ramrod being liable to break in the stress of battle.

The Prussian infantry regiment was based on the cantonment, with soldier joining their local regiment.  Soldiers were released for key agricultural times such as sewing and harvesting.  In the autumn reviews were conducted of all regiments to check that each regiment was up to the required standard.  Each year certain regiments were selected to conduct the review at Potsdam under the eye of the King.  Officers whose soldiers were considered by Frederick not to be of a sufficient standard were subjected to a public tongue lashing and in extreme cases dismissed on the spot.

Prussian Dragoner-Regiment Holstein-Gottorp No 9: Battle of Kesselsdorf on 15th December 1747 in the Second Silesian War: picture by Adolph Menzel

The efficiency of the Prussian regiments at drill enabled them to move around the battlefield with a speed and manoeuvrability that no other European Army could equal.

Heavy cavalry of the period comprised cuirassiers, whose troopers wore steel breastplates, and dragoons.  The main form of light cavalry were the regiments of hussars.  The Austrian hussars were Hungarian and the genuine article while the hussars of other armies were given the same dress as Hungarian hussars and expected to perform to similar standards.

The light cavalry arm was provided by the Prussian Hussar regiments.  Frederick found the Prussian Hussars as inadequate for their role as the heavy cavalry regiments.  Following Mollwitz and in particular after the First Silesian War the hussars were re-organised and re-trained to provide a first class scouting and light cavalry service.  Frederick found in Colonel von Zieten the ideal officer to implement the improvements in the hussar regiments.  The Prussian Hussars wore the traditional hussar dress worn by the original Hungarian Hussars of tunic, britches, dolman (slung jacket), busby (fur hat) with bag, sabretache (leather wallet on straps) and curved sword. 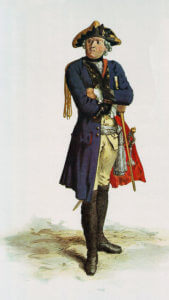 Prussian Füsilier-Regiment Alt-Württemberg No 46: Battle of Kesselsdorf on 15th December 1747 in the Second Silesian War: picture by Adolph Menzel

The Austrian infantry wore white coats with lapels, cuffs and skirts turned back showing the regimental lining colour.  Headgear was the tricorne hat for line infantry and bearskin cap for grenadiers.  The infantry weapons were musket, bayonet and hanger small sword.  Heavy cavalry wore white coats and hats as for the infantry and were armed with a heavy sword and carbine.  The Austrian army contained a large number of irregular units such as the Pandours from the Balkans who wore their ethnic dress without uniformity.  Hungarian Hussars provided the light cavalry arm.  These Hussars were dressed as described for the Prussian Hussars, were considered to be little more than bandits but were highly effective in all the roles required of light cavalry.

The artillery of each army was equipped with a range of muzzle loading guns.  The Prussian Artillery was considerably more efficient at manoeuvring on the battle field.  In the changes implemented by Frederick after the First Silesian War horse artillery was introduced to support the Prussian cavalry.

Background to the Battle of Kesselsdorf

The Prussian Army and State of the middle of the 18th Century owed its strength to the father of Frederick the Great, King Frederick William, the ‘Soldier King’.  The Kingdom of Prussia comprised a number of areas scattered across Northern Germany from Minden and the tiny provinces of Jules and Berg in the West to the more compact provinces of Pomerania and East Prussia on the Baltic coast in the East.  The capital of Prussia lay in the City of Berlin in the heartland of Brandenburg.  During his reign Frederick William established an efficient civil state with the primary duty of supporting a large and well organised army, the bedrock of which was the Prussian Infantry.  The noble families of Prussia were required to commit their sons to the army’s officer corps.  Unlike the military nobility in other European states the Prussian Officer Corps was expected to devote its energies to learning its fighting trade.  Regiments were reviewed on an annual basis by the King and woe betide the officers of any regiment that fell below the required standard of drill and performance. 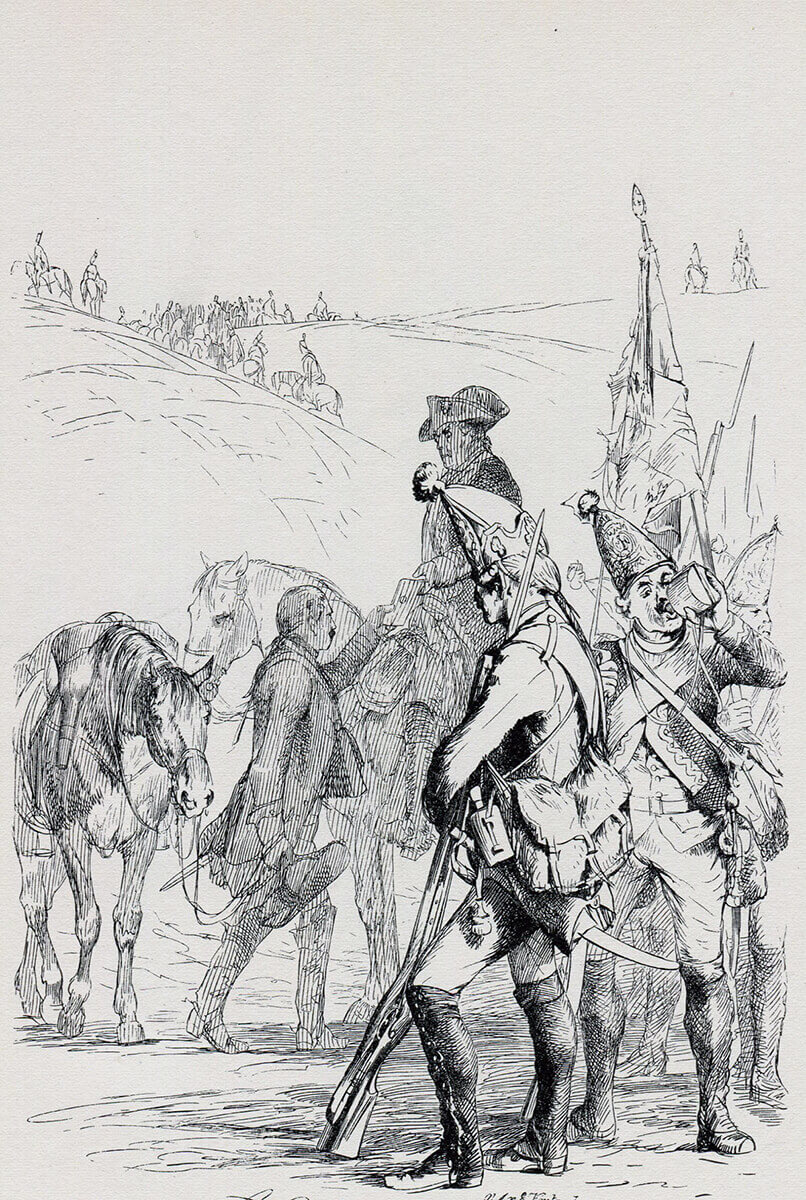 The Prussian Army established the technique of battlefield drill in the era of the musket.  Prussian Infantry regiments could be trusted to move around the battlefield in order and at speed in a way that no other army could.  Frederick the Great, while undoubtedly owing a great deal to the work his father had carried out on the army and state, brought his own unique talents to bear in improving the infantry and forging formidable assets out of the arms his father had neglected; principally the cavalry and the artillery, after the dismal performance of the Prussian cavalry at Mollwitz.

Frederick William had a reverence for the established order in Europe, holding the Emperor of Austria in particular awe.  He would not have dreamt of launching Prussia on the extraordinary series of wars Frederick the Great began in 1741 by invading the Austrian province of Silesia.

Frederick William died on 31st May 1740 and Frederick II took the throne of the Kingdom of Prussia.  On 20th October 1740 the Emperor Charles VI of Austria died leaving the imperial throne to his daughter Maria Theresa.  Frederick resolved to seize the Austrian province of Silesia for Prussia. 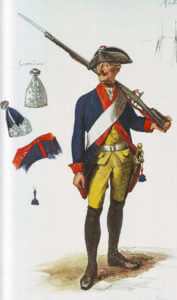 Prosperous and partly Protestant, Silesia lay on the southern Prussian border along the banks of the river Oder.  With its population of 1.5 million Frederick saw Silesia as a significant addition to the Prussian state with its 2.2 million inhabitants.  But Frederick would have to fight 3 wars over 22 years with the Austro-Hungarian Empire for his prize.

In the First Silesian War (1740 to 1742) Frederick the Great fought the successful battles of Mollwitz and Chotusitz before negotiating the Treaty of Breslau in 1742.

In 1744 Frederick re-entered the war against the Austrian Empire by invading Bohemia.  After a disappointing campaign which saw the Prussian Army forced to retreat into Silesia, Frederick lured Prince Charles of Lorraine’s  Austro-Saxon Army out of the hills and beat it in the iconic victory of Hohenfriedburg.

In the follow up to Hohenfriedburg Frederick again invaded Bohemia.  September 1745 saw the Prussian Army retreating and encamped near the Bohemian village of Burkersdorf near the Silesian border.  Frederick there defeated the Austrian/Saxon Army in the desperately fought battle of Soor, before withdrawing into Silesia.

Frederick expected that defeating the Austrian commander, Prince Charles of Lorraine, yet again would give the Prussians a winter of relative calm.  This was not to be.  Within a week of arriving back in Silesia Frederick learnt that the Austrians and Saxons planned an incursion from Northern Saxony into Brandenburg itself during the winter of 1745/6.  In spite of a successful campaign of manoeuvre by Frederick against the main Austrian army, mid-December 1745 found Prince Charles marching north to join the Saxon Army at Dresden.  The other main Prussian Army under the Old Dessauer was moving south towards Dresden, but far too slowly in Frederick’s view. 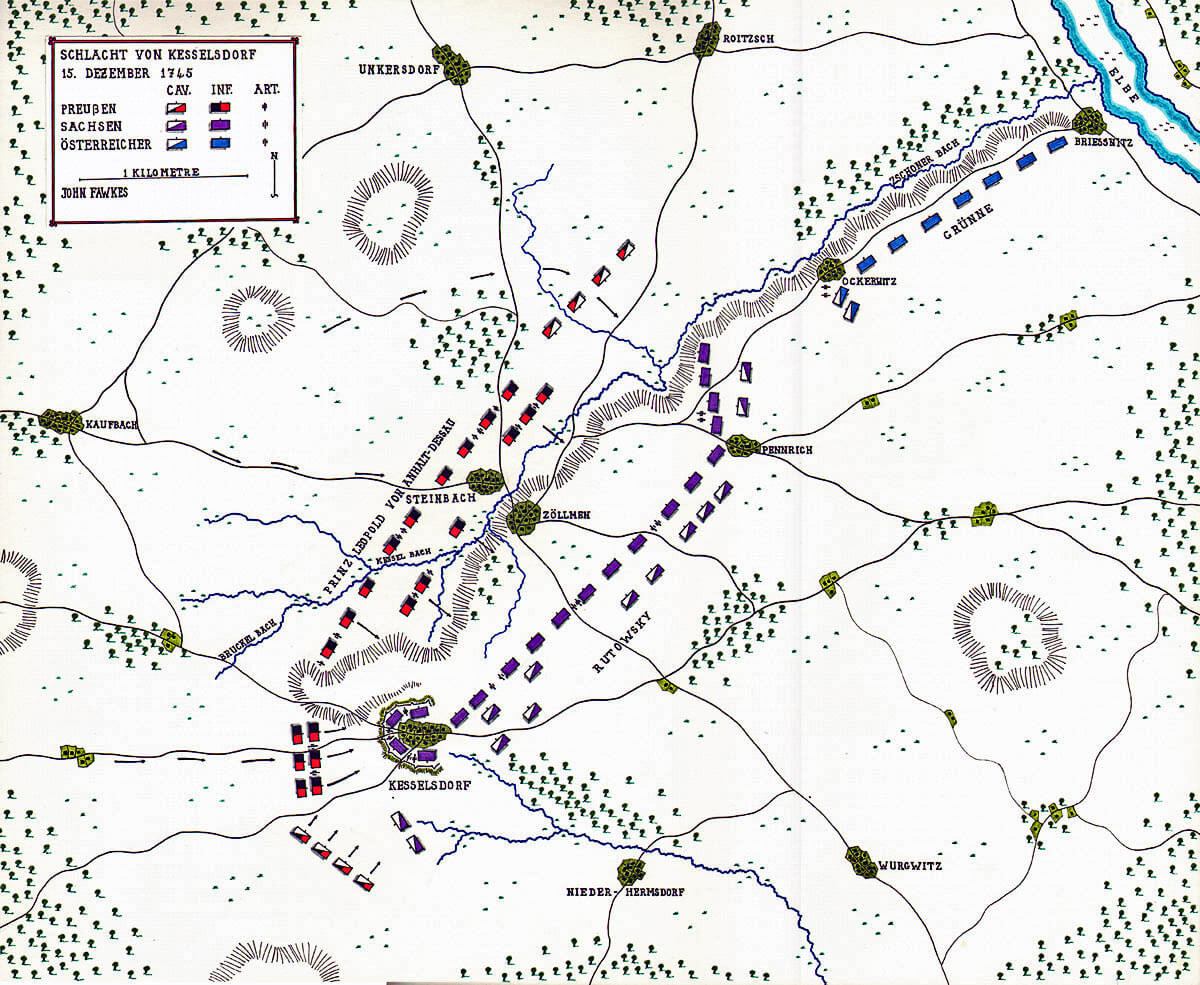 Map of the Battle of Kesselsdorf 15th December 1747 in the Second Silesian War: map by John Fawkes 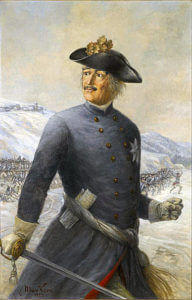 Leopold Prince of Anhalt-Dessau, the ‘Old Dessauer’: Battle of Kesselsdorf on 15th December 1747 in the Second Silesian War: picture by Max Korn

Prinz Leopold of Anhalt-Dessau, known as the Old Dessauer, came up with the main Saxon Army under Marshall Rutowsky in positions along the Zschoner-Bach, a tributary of the Elbe, at the town of Kesselsdorf.  Rutowsky was in company with an Austrian contingent under General Grϋnne.  The Saxon left lay in the town of Kesselsdorf which Rutowsky had fortified and garrisoned with a strong contingent of infantry and guns.  The remaining Saxon infantry was positioned along the river line with cavalry in support on the left and centre.  The Austrians lay along the river line but further towards the Elbe and took no part in the battle.

On 15th December 1745 the Prussians approached from the West through snowy conditions.

Whereas Frederick would have sought to outflank the Saxon positions the elderly Prussian veteran resolved on a frontal assault on Kesselsdorf the strongest section of the Saxon line.  A force of Prussian infantry including the Old Dessauer’s own Anhalt regiment carried out the attack but were brutally repelled by the heavy artillery fire from the town and fell back in confusion.  A second assault was mounted but was also repelled.  Seeing the Prussians in retreat the inadequately disciplined Saxons poured out from behind their defences in pursuit, only to be caught in the open by the waiting Prussian Dragoons.  The Prussian cavalry attack followed by the re-invigorated infantry took the Prussians through Kesselsdorf and triggered the collapse and precipitate retreat of the whole Saxon Army followed by their Austrian comrades.

While the destructive assault on Kesselsdorf was taking place the infantry of the Prussian centre and left attempted an attack across the marshy river against the Saxon centre and right , but with little success, until the Saxons withdrew following the capture of the town.

Rutowsky’s army fell back in considerable disorder on the Saxon capital Dresden. 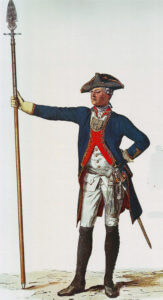 Prussian Infantry Regiment von Kleist No 27: the regiment lost 12 officers and 451 men in the Battle of Kesselsdorf on 15th December 1747 in the Second Silesian War: picture by Adolph Menzel

Aftermath to the Battle of Kesselsdorf:  King Frederick II of Prussia received the news of the Prussian victory in the evening of 15th December 1745 from one of his officers.  Frederick met the Old Dessauer at a town near Dresden two days later.  Frederick dismounted, uncovered and embraced the old veteran with gratitude.

On Christmas Day the war ended with the Treaty of Dresden.   The Empress Maria Theresa of Austria thereby acknowledged Prussia’s entitlement to keep Silesia and the Duchy of Glatz.  Few thought the treaty meant an end to the conflict over Silesia.  There would merely be a long truce before the real test of the Seven Years War in 1756.

Anecdotes from the Battle of Kesselsdorf:

References for the Battle of Kesselsdorf:

To the Second Silesian War index