French victory on 15th October 1760, over the British and their allies 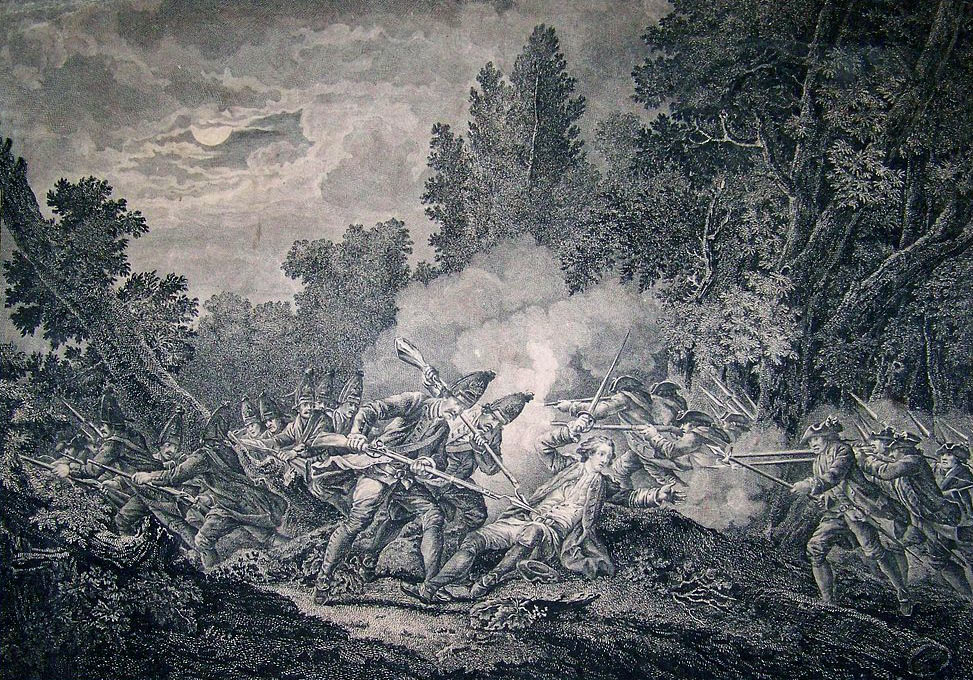 Hereditary Prince (the Erbprinz) of Brunswick: Battle of Kloster Kamp on 15th October 1760 in the Seven Years War

Place of the Battle of Kloster Kamp: At the junction of the Rhine and the Lippe Rivers in North West Germany.

Combatants at the Battle of Kloster Kamp: British, Prussian, Hanover, Brunswick and Hessen troops against the French.

Commanders at the Battle of Kloster Kamp: The Hereditary Prince (the Erbprinz) of Brunswick against Lieutenant General the Marquis de Castries.

Uniforms, arms and equipment at the Battle of Kloster Kamp:

All regular European soldiers of this time fought in a knee length uniform coat, turned back at the skirt, cuffs and lapels to reveal a distinctive regimental lining colour. Headgear was a black tricorne hat with a lace brim, except for grenadiers who wore a tall mitre cap. In some armies the grenadier mitre was giving way to a bearskin cap. The uniform was white for the majority of French regiments, blue for the Prussians and German armies that followed the Prussian tradition, like Hesse-Darmstadt, and red for the British and Hanoverians. There were exceptions within every army. The French Royal Household troops wore a variety of coats. The foreign mercenary regiments in the French service wore red. The Hanoverian and Hessen horse wore white. The British Royal Artillery and Royal Horse Guards wore blue coats.

Winner of the Battle of Kloster Kamp: The battle is considered a qualified victory for the French. 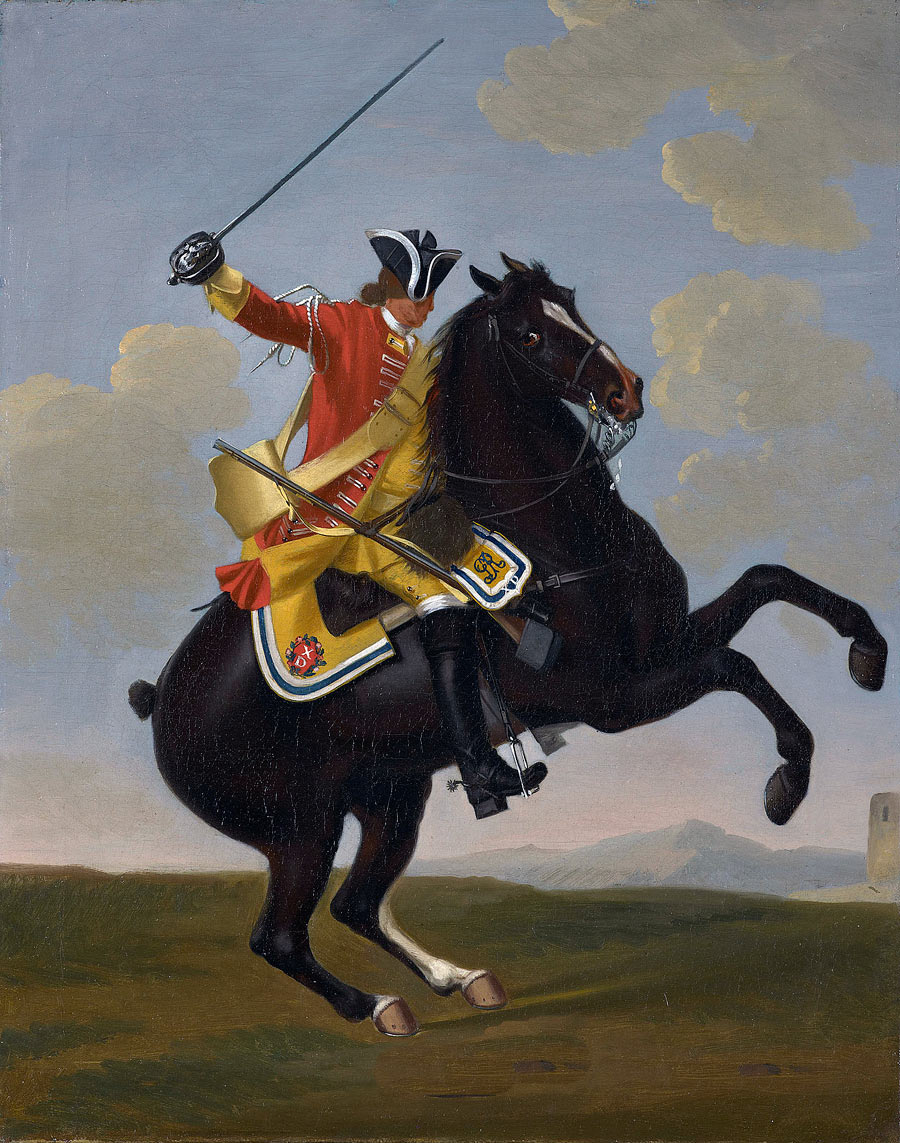 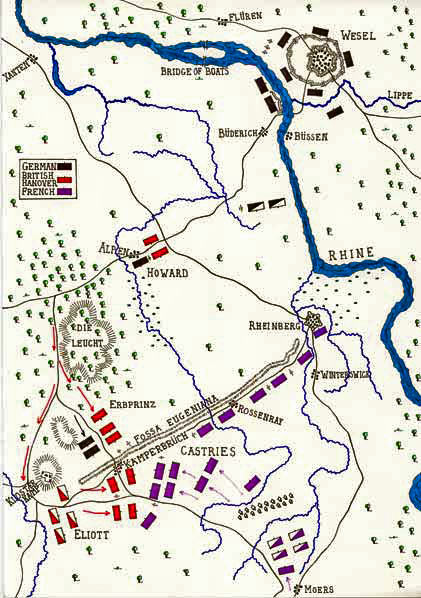 Map of the Battle of Kloster Kamp on 15th October 1760 in the Seven Years War: map by John Fawkes

Account of the Battle of Kloster Kamp: In the early autumn of 1760 the Archduke Ferdinand of Brunswick, the commander in chief of the allied army, lay behind the line of the River Diemel with his army. The French threatened Hanover. To create a diversion and draw the French armies to the West, the Archduke dispatched an army of some 20,000 men under the command of the Erbprinz to seize Wesel on the lower Rhine. 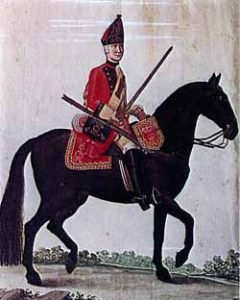 The fortified town of Wesel lies at the junction of the River Lippe and the Rhine. The French commander prepared the town to resist attack, destroying the bridge across the Rhine at the mouth of the Lippe. French forces under the Lieutenant Genearl the Marquis de Castries hurried from the South East to relieve the garrison.

The Erbprinz invested Wesel and finding that the town could not be taken by storm prepared for a formal siege. Heavy siege artillery was brought down from Holland with bridging equipment. Crossings were established above and below the town and the Erbprinz’s army moved to the west bank to block the advancing French forces.

Castries’ troops took up positions behind the Fossa Eugenica, an abandonned section of canal running from Rheinberg to the hilltop convent of Kloster Kamp. Castries intended to await the arrival of further French forces before beginning the assault on the lines of the besiegers around Wesel.

The Erbprinz resolved to attack Castries’ army with a movement round the French left flank at Kloster Kamp. His force began its approach march late in the evening of 15th October 1760. The Major General George Augustus Eliott commanded the advance party, two squadrons of Prussian Hussars, the Royal Dragoons, the Inniskilling Dragoons and the 87th and 88th Highlanders.

A reserve under Major General Howard lay some miles back with the 11th, 33rd and 51st Foot and 5 Hessian battalions.

Beginning the assault in the middle of the night Eliott’s force drove the French out of Kloster Kamp convent and took the bridge over the canal. The sounds of firing alerted the main French army and senior officers moved forward to reconnoitre. All these officers were captured. One, the Chevalier D’Assas, a captain in the Regiment of Auvergne, shouted to his soldiers before being bayoneted. The Auvergne Regiment rushed to arms and more French regiments came up. 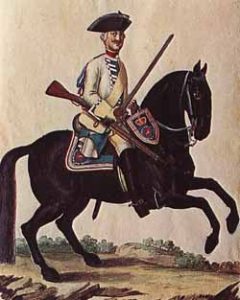 Dawn broke as the British and German foot went into the attack, the Highland regiments spilling around the French flank. The assault was successful, driving the French back and capturing the village of Kamperbruch on the canal.

The Marquis de Castries, an energetic young general, brought up his reserves and, rallying the retreating regiments, attacked the allied foot. The countryside was divided into small hedged fields, making movement of formed regiments difficult. The success of the assault broke up the formations of the British and German regiments. The soldiers expended their battlefield issue of 24 rounds, with no method for resupplying them with ammunition. The French counter attack drove the allied foot back and across the canal. At this critical point in the battle the Erbprinz was injured falling from his wounded horse, putting him out of action for a time. Once recovered he sent an aide de camp to bring forward Howard’s reserve. This took time and in the meanwhile the French pressed their attack.

At the western end of the canal General Eliott took the initiative, leading the three British cavalry regiments, the Royals, the Inniskillings and the 10th Dragoons, in a charge along the south bank of the canal. Eliott’s charge disrupted the French advance and enabled the allied foot to regain the north bank. Howard’s regiments coming up from the rear formed a cordon which enabled the retreating foot to be stopped and reformed. The Erbprinz, recovered from his fall, ordered his troops to fall back towards the Rhine.

He there found that the bridge of boats had been swept away by the fast flowing river, stranding his army on the west bank for two further days.

Fortunately for the allies Castries failed to follow up his success, choosing to wait in his positions behind the canal for reinforcements to come up. 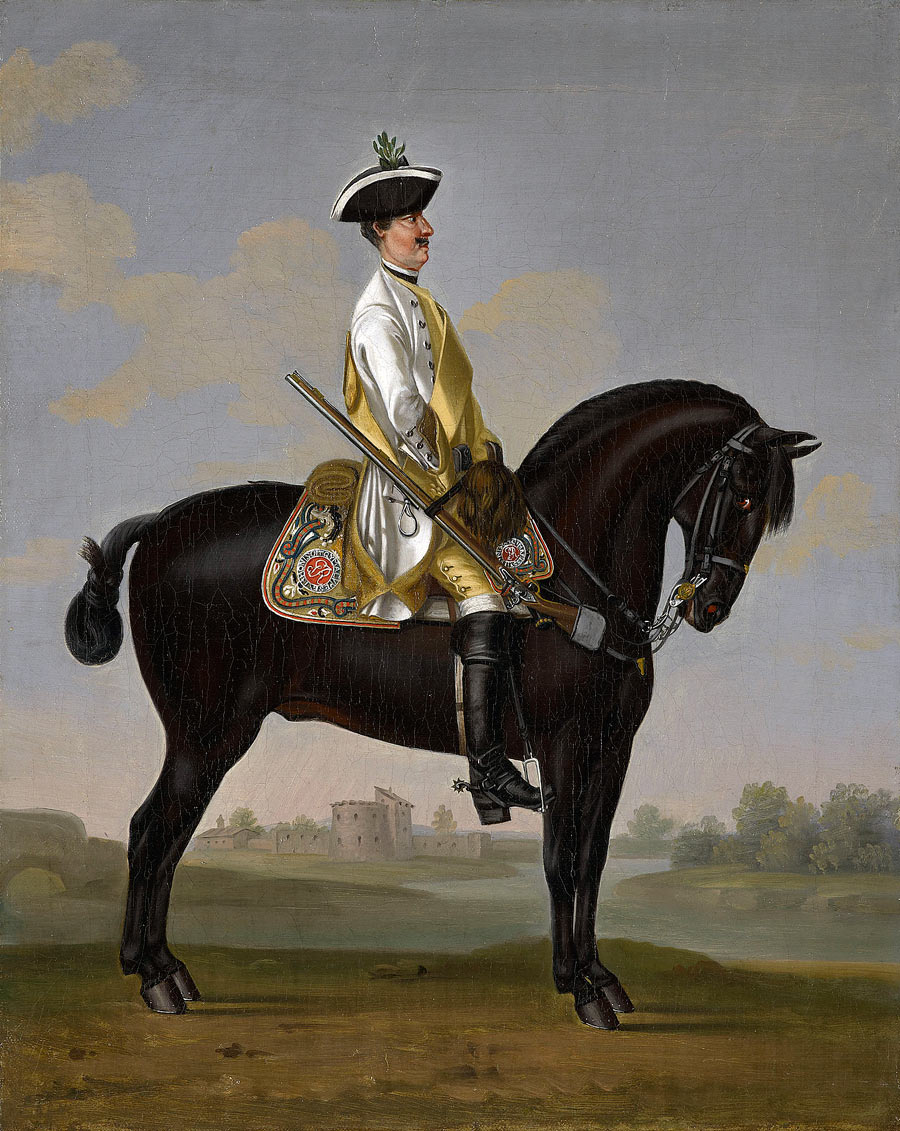 Follow-up to the Battle of Kloster Kamp:
During the following days the allies were permitted to cross back over the Rhine and to withdraw from the siege of Wesel. Castries’ attacks were too late to impede the retreat.

The allied expedition to capture Wesel had been a failure but the French enabled it to escape.

Anecdotes from the Battle of Kloster Kamp:

References for the Battle of Kloster Kamp:
His Britannic Majesty’s Army in Germany during the Seven Year War by Savory