The narrowly-won battle, fought by the army of Lieutenant General Sir Donald Stewart on 19th April 1880, during its march north to Kabul 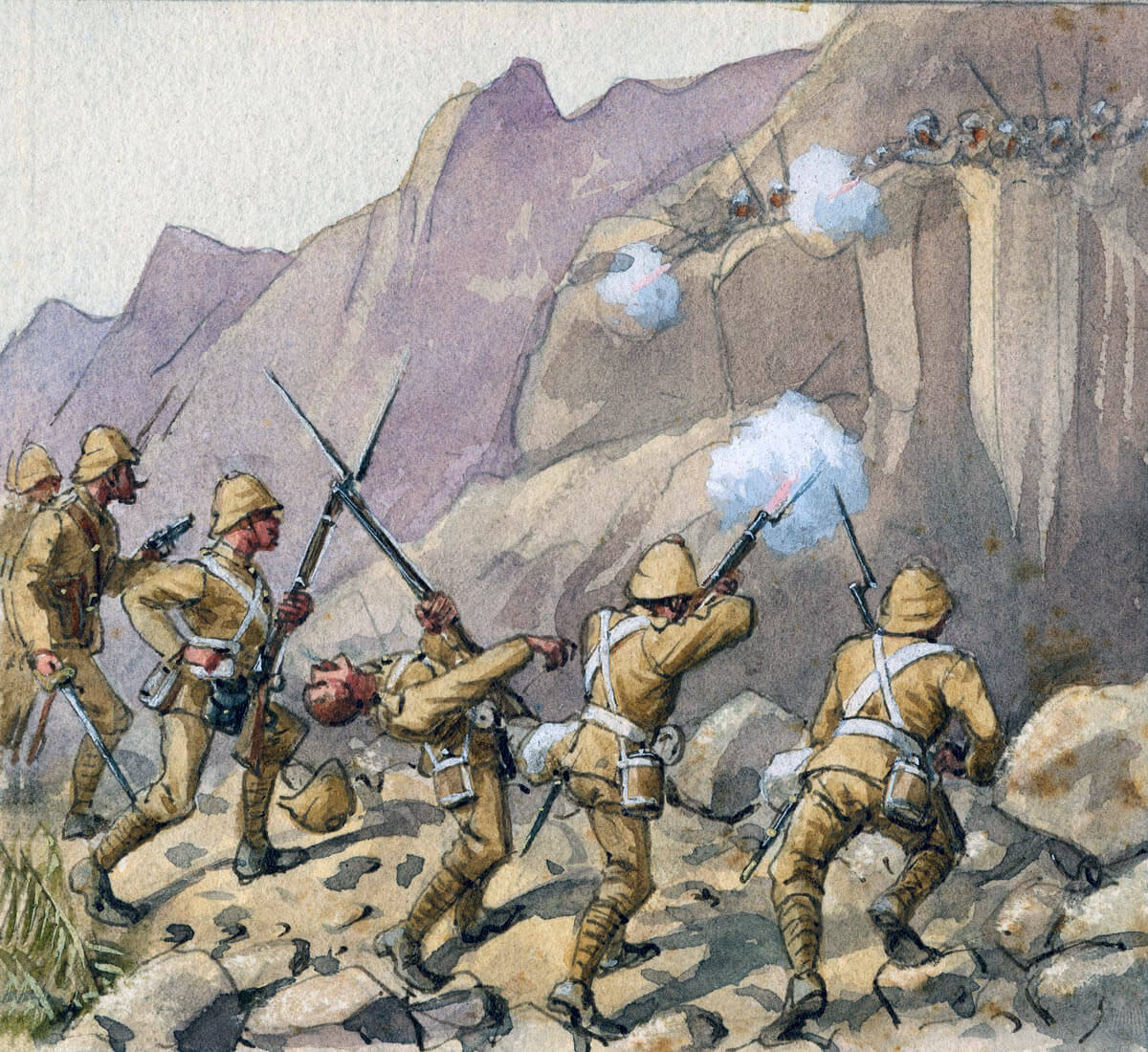 Place of the Battle of Ahmed Khel: On the road between Kandahar and Kabul in Central Afghanistan.

Combatants at the Battle of Ahmed Khel: British and Indian troops against Afghan tribesmen. 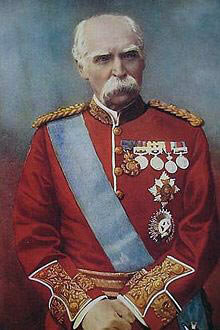 Lieutenant General Sir Donald Stewart, British and Indian commander at the Battle of Ahmed Khel on 19th April 1880 in the Second Afghan War

Size of the armies at the Battle of Ahmed Khel: 7,200 British and Indian troops against 15,000 tribesmen mounted and on foot of the Andarees, Tarkees, Suleiman Khels and other Afghan tribes.

Uniforms, arms and equipment at the Battle of Ahmed Khel:
The British and Indian forces were made up, predominantly, of native Indian regiments from the armies of the three British presidencies, Bengal, Bombay and Madras, with smaller regional forces, such as the Hyderabad contingent, and the newest, the powerful Punjab Frontier Force. 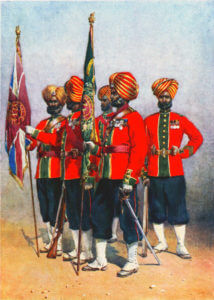 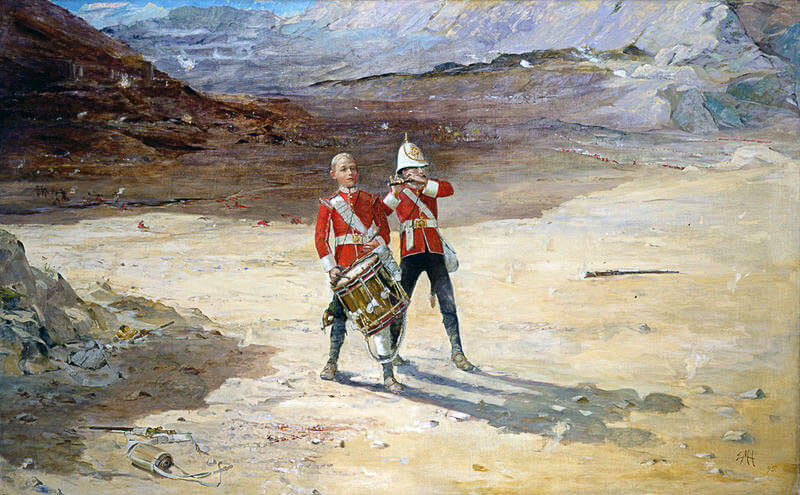 ‘The Drums of the Fore and Aft’: Battle of Ahmed Khel on 19th April 1880 in the Second Afghan War: picture by Edward Matthew Hale 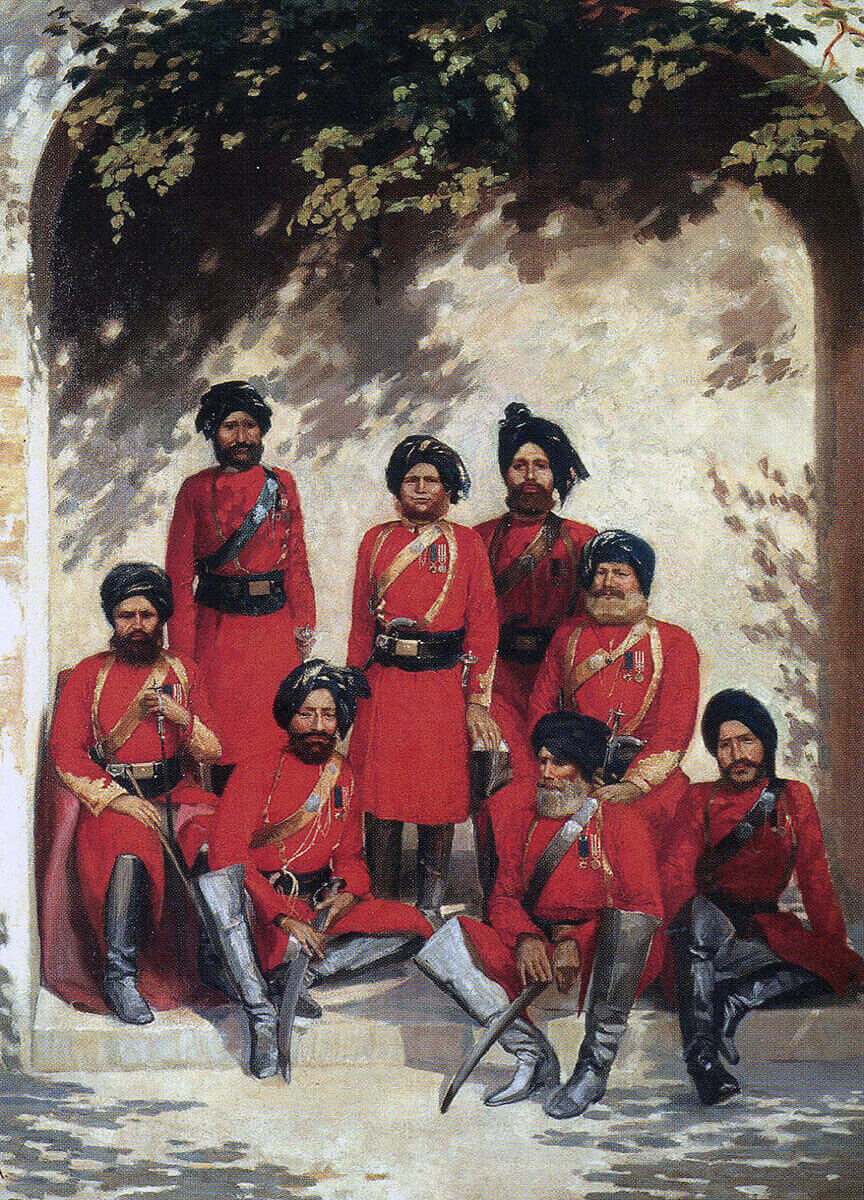 Indian Officers of the 2nd Punjab Cavalry: Battle of Ahmed Khel on 19th April 1880 in the Second Afghan War: picture by Gordon Hayward 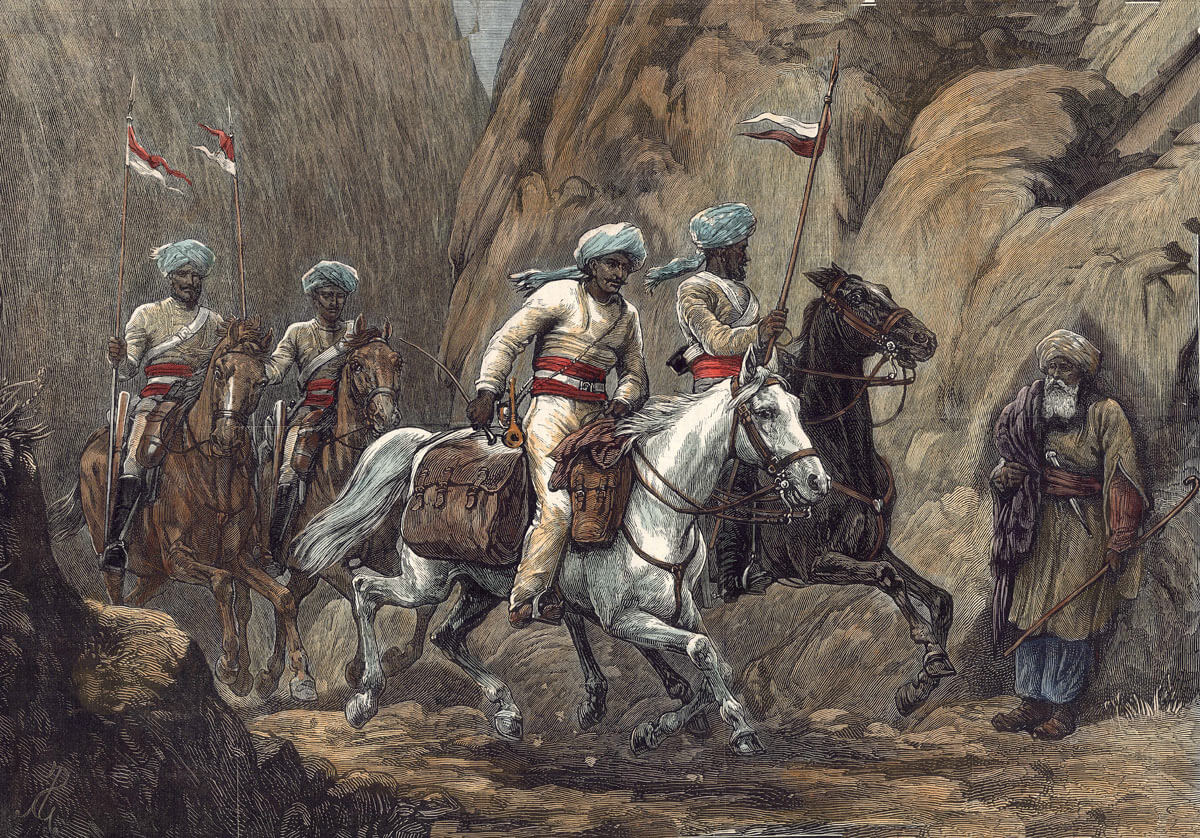 Courier on the road with his escort: Battle of Ahmed Khel on 19th April 1880 in the Second Afghan War 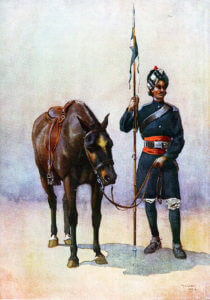 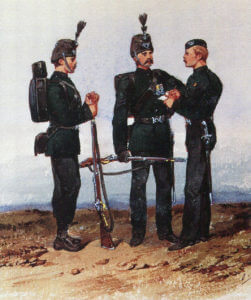 Soldiers of the Rifle Brigade in England: Battle of Ahmed Khel on 19th April 1880 in the Second Afghan War: picture by Orlandio Norie

Winner of the Battle of Ahmed Khel: The British and Indians. 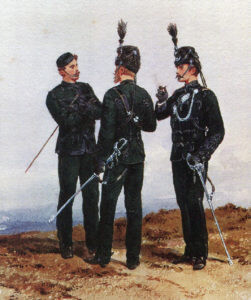 Officers of the Rifle Brigade in England: Battle of Ahmed Khel on 19th April 1880 in the Second Afghan War: picture by Orlandio Norie 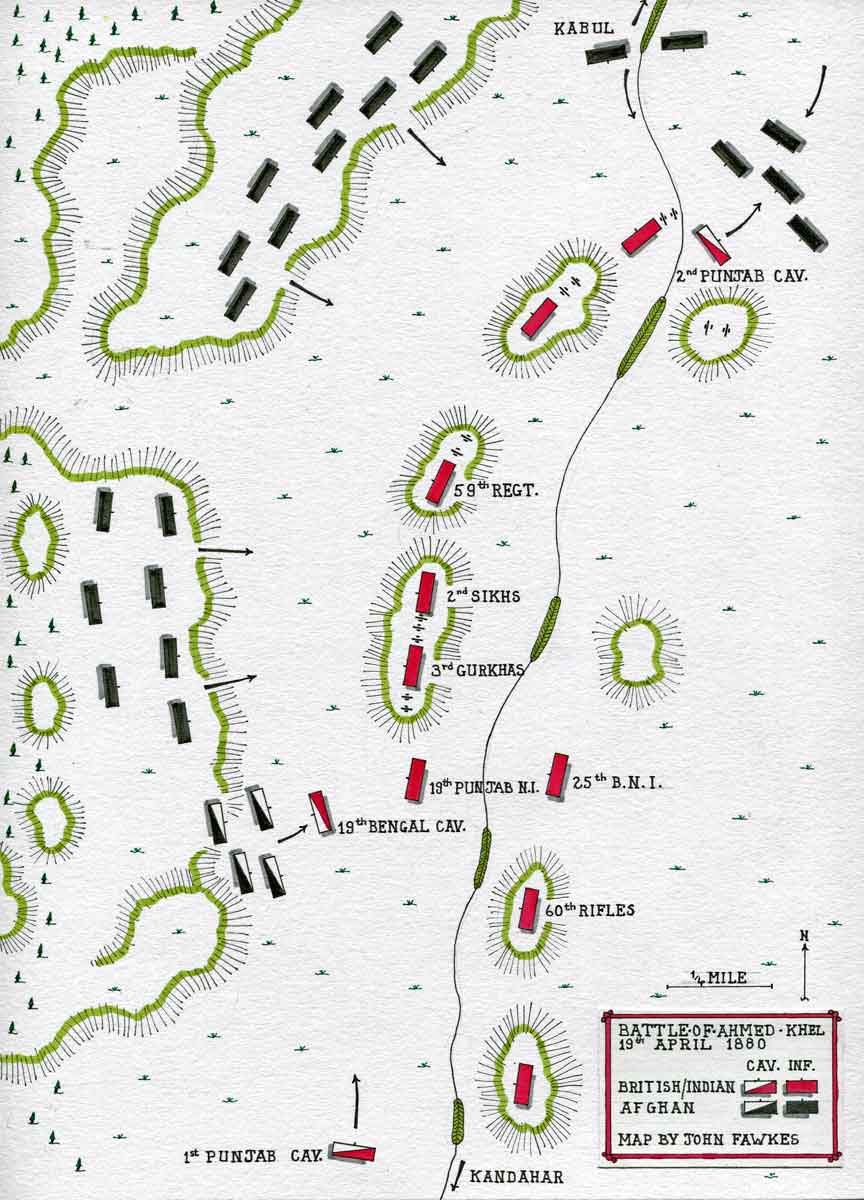 Map of the Battle of Ahmed Khel on 19th April 1880 in the Second Afghan War: map by John Fawkes

Account of the Battle of Ahmed Khel:
The attack on the main British and Indian army, the Kabul Field Force, under Major General Sir Frederick Roberts VC, in the Sherpur Cantonment at Kabul in December 1879, although a victory over the massed Afghan tribesmen, revealed the fragile nature of the British/Indian occupation of Afghanistan. 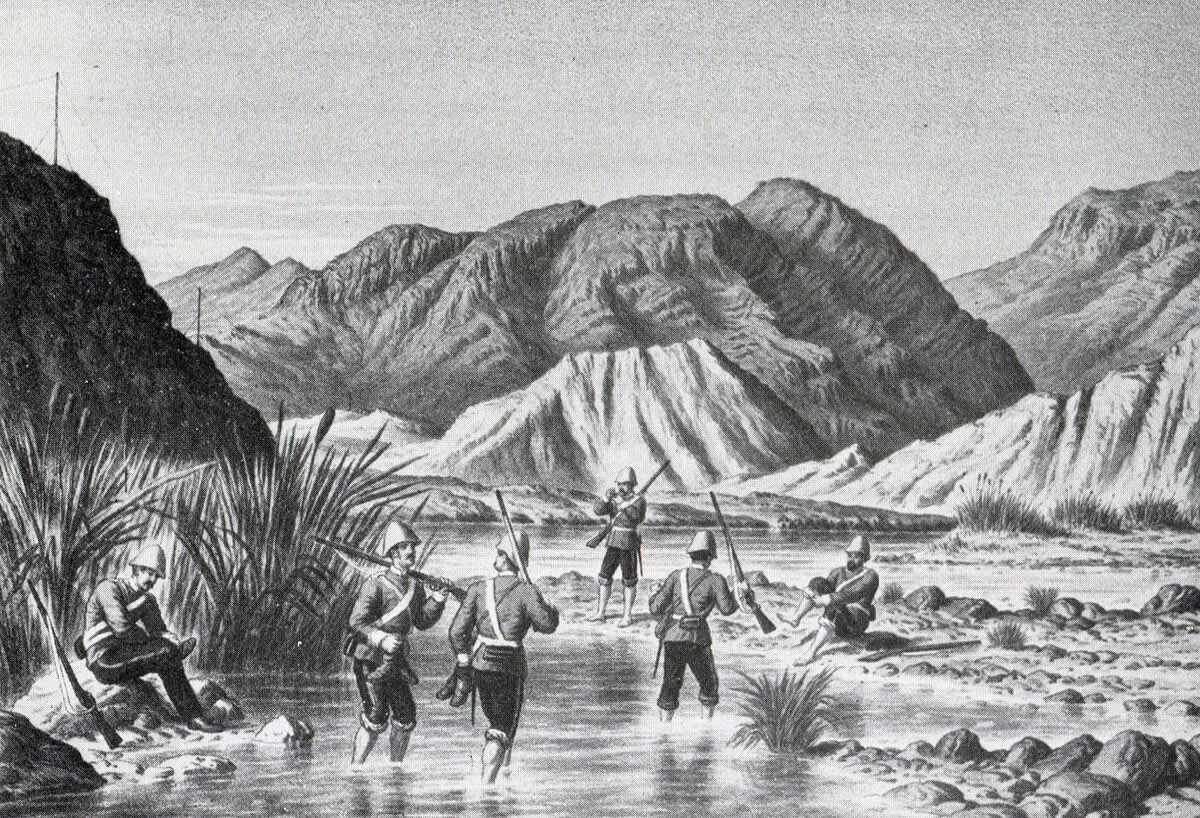 Soldiers of the 59th Regiment in Afghanistan: Battle of Ahmed Khel on 19th April 1880 in the Second Afghan War

In addition, the Government of India in Calcutta was increasingly alarmed at the expense of the war and its attritional effect on the Bengal and Bombay armies; worn down by the relentless attacks of the Afghan tribes on the long lines of communication. 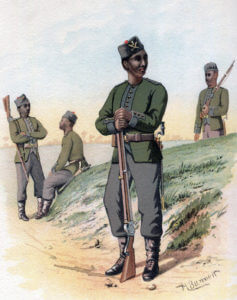 The secret policy, devised by the Government of India, was to appoint a new Ameer of Afghanistan and withdraw its armies at the first opportunity. As a preliminary, Major General Stewart would march his largely Bengal Army force from Kandahar and join Roberts at Kabul, for a withdrawal down the Khyber Pass to Peshawar. A Bombay division would replace Stewart in Kandahar, which was planned to remain under British control, as a separate state from the rest of Afghanistan.

Stewart marched out of Kandahar for Kabul on 27th March 1880. A force would march south from Kabul to meet him on the road at Sheikabad.

Stewart’s army, totalling 7,200 troops, with a similar number of camp followers, moved in two brigades, marching a day’s interval apart on opposite sides of the Tarnak River as far as Ghuznee. The shortage of transport animals, camels and oxen, required the Indian troops to live off the countryside. 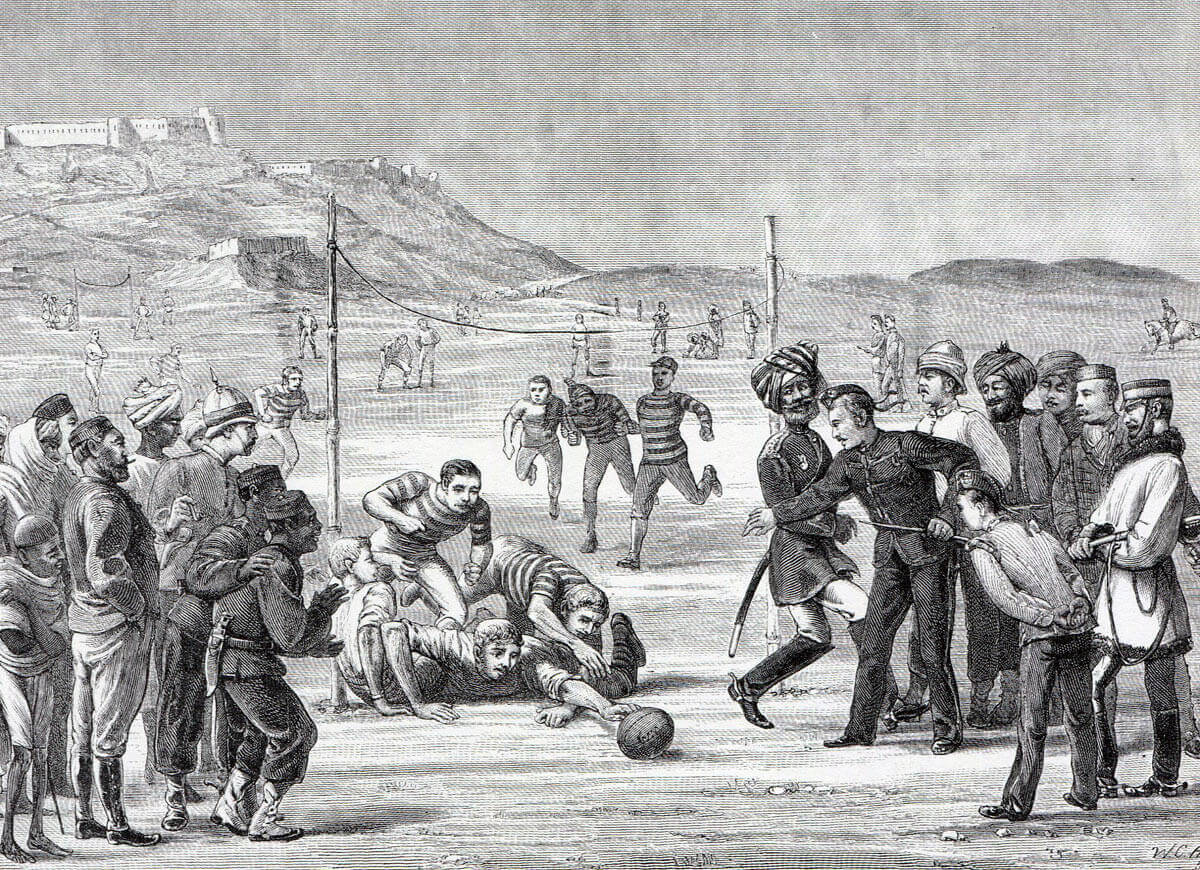 Soldiers of the British 59th Regiment playing rugby at Khelat-i-Ghilzai during the march to Kabul: Battle of Ahmed Khel on 19th April 1880 in the Second Afghan War

The army halted at Kelat-i-Ghilzai on 6th and 7th April 1880 and recommenced the march on 8th April, with signs of a gathering opposition from the Afghans. Forty miles north of Kelat, the army crossed from Kandahar province into Ghuznee, the province held by Mohammed Jan and the inspirational Mullah, the Mushk-i-Alam, the Afghan commanders at the attack on the Sherpur cantonment. In Ghuznee Province, the Afghans made every effort to destroy or hide supplies that might be used by Stewart’s troops.

The British and Indian army was now shadowed by a large force of Hazara tribesmen, who seized every opportunity to loot Afghan villages.

Stewart consolidated his force, allowing the second brigade to catch up and halted at Jan Murad, twenty-five miles short of Ghuznee, before resuming his march on 18th April 1880. The weather was hot.

On 19th April 1880, the column marched out at daybreak towards Kabul and was soon strung out along some six miles of road; the advance guard of 19th Bengal Lancers, 19th Bengal Native Infantry and six guns of the Royal Horse Artillery, commanded by Brigadier General Palliser, followed by Stewart with his headquarters, Hughes’ brigade, then the transport column escorted by Barter’s brigade. 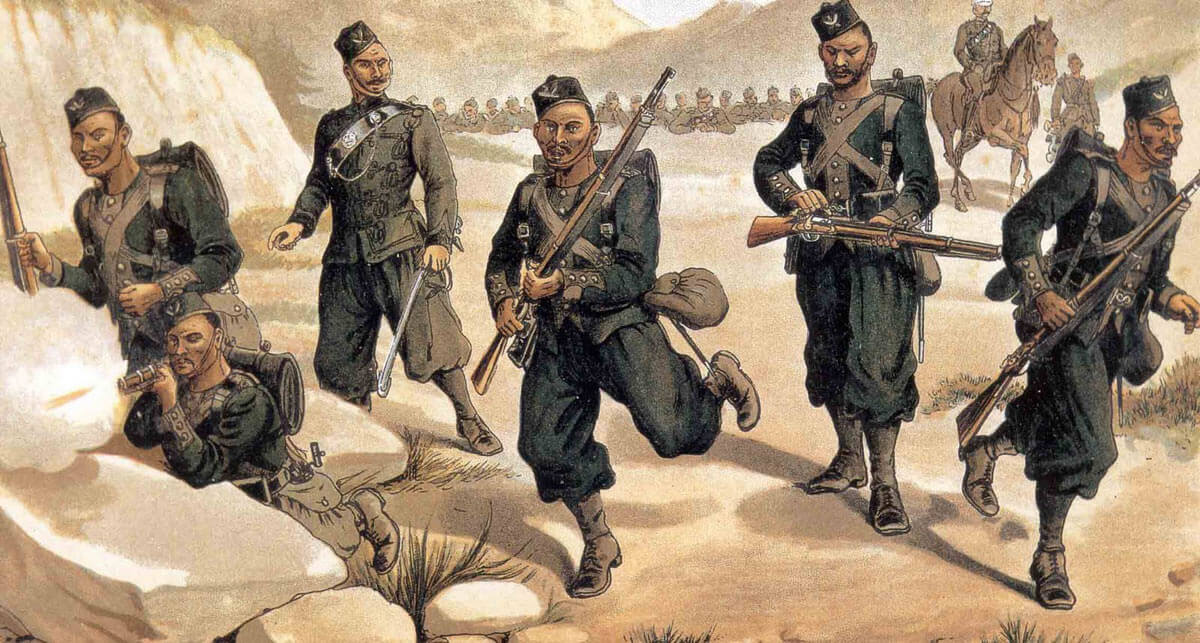 Beyond a village named Mashaki, the western hills curved abruptly across the line of the road. The column stopped for breakfast short of this point and Stewart was taking breakfast, when he was informed that a large force of Afghan tribesmen was in place along the hills, blocking the road north.

Stewart sent orders back to Barter to bring up a substantial part of his brigade, still five miles distant, but resolved to attack the Afghans without waiting to consolidate his force. The artillery deployed across the road, supported by the 2nd Punjab Cavalry and a squadron of 19th Bengal Lancers to its right rear, with the infantry facing west along the line of the road and one and a half squadrons of 19th Bengal Cavalry on the left flank. 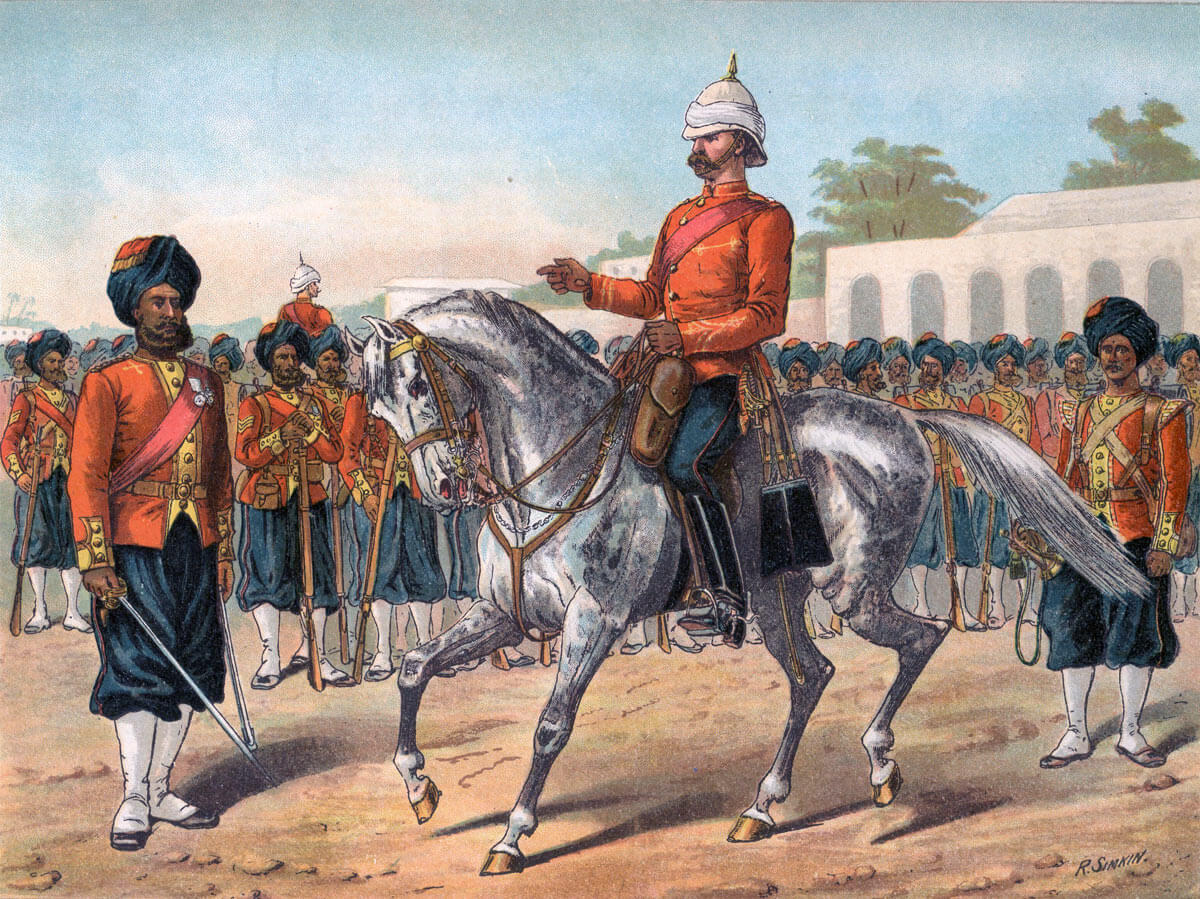 Before Stewart’s infantry could begin its advance, a mass of Afghan tribesmen rushed over the hill and attacked the infantry line, a large force of mounted Afghans charging forward on the 19th Bengal Lancers on the left flank. The Bengal Lancers were driven back onto the 3rd Gurkhas, throwing that regiment into confusion and the 59th Regiment was caught changing formation and without bayonets fixed. A high wind whipping up the dust significantly reduced the visibility, making the battle conditions even more difficult.

For a time, there was a danger that Stewart’s force would be overwhelmed, but the infantry regiments established a solid pattern of volley firing that drove back the tribesmen. The 2nd Punjab Cavalry attacked the Afghan left flank and the 1st Punjab Cavalry, coming up from Barter’s brigade, restored the position on Stewart’s left. 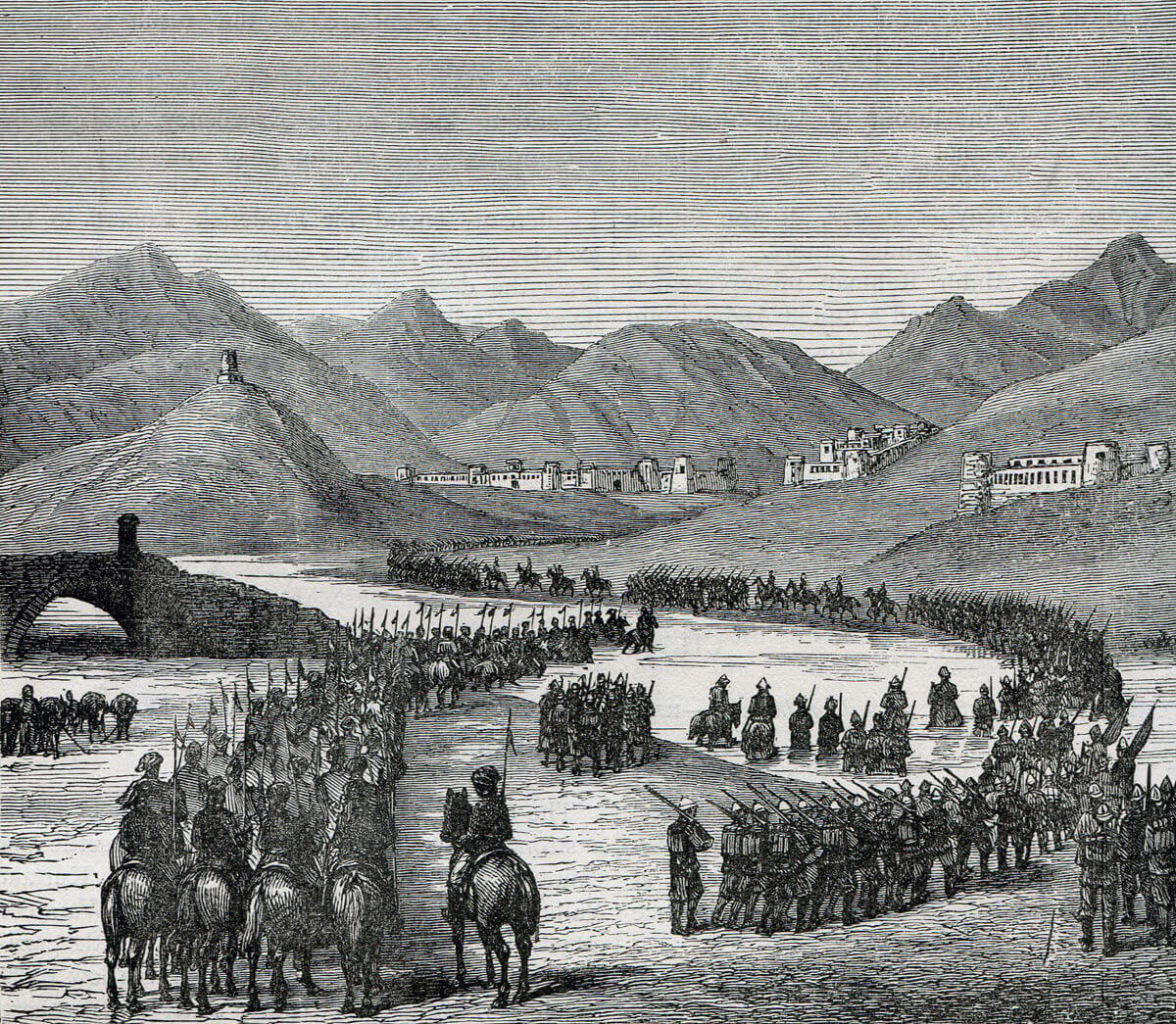 The musketry of the infantry, particularly of the 2nd Sikhs, inflicted heavy casualties on the Afghan tribesmen, who finally turned and fled, pursued by the Hazaras, killing all the fugitives they could catch.

Stewart limited his cavalry to pursuit within the valley, before turning to the care of his casualties and the reorganisation of his column. 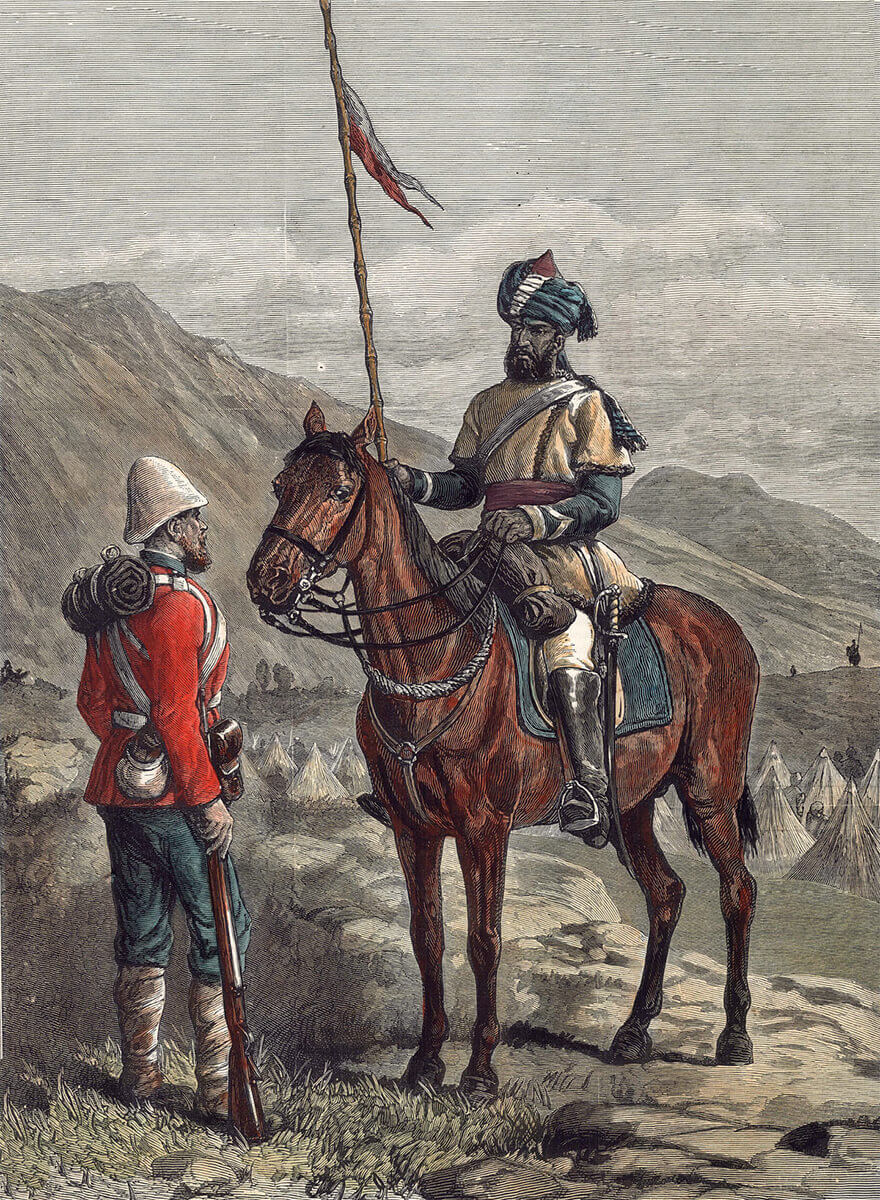 British infantryman and a Bengal Cavalry Sowar: Battle of Ahmed Khel on 19th April 1880 in the Second Afghan War

Follow-up to the Battle of Ahmed Khel:
Following the battle, Stewart marched his division to Nani and sent his cavalry on to Ghuznee, which they captured without resistance.

After a period spent at Ghuznee, Stewart marched on to Kabul and, on arrival, took over command from Roberts, as the senior general.

Anecdotes and traditions from the Battle of Ahmed Khel:

References for the Battle of Ahmed Khel: