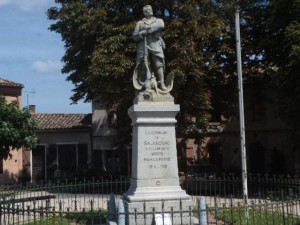 It was interesting and touching to see the contrasting memorials in a small and impoverished town like Salvagnac, which did not put the names of its fallen sons on the commemorative plaque for its Great War memorial, and in Albi with its fine basilica. The Saint Salvy area of Albi has its own plaque in the parish church. 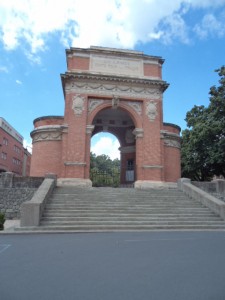 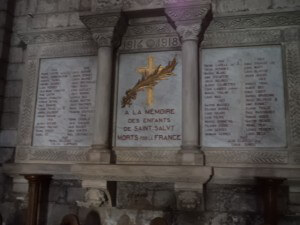 Spent several hours in the town of Moissac on the Tarn River, with its memorial to its 300 dead in the Great War. The detachable plaque has enabled the name of the town’s single casualty in Afghanistan to be added to his fellows from the First and Second Wars and the colonial wars in Algeria, Morocco and Indo-China. 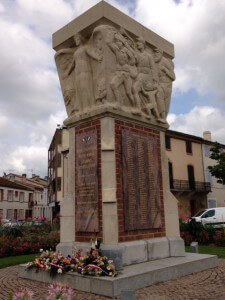 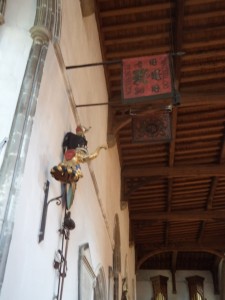 The memorial to Lieutenant Viscount Wendover in All Saints Church, High Wycombe, Buckinghamshire.

This extraordinary memorial in All Saints is to Lieutenant Viscount Wendover, Royal Horse Guards, mortally wounded at the Second Battle of Ypres during the desperate dismounted attack by the 8th Cavalry Brigade on 13th May 1915 to recover the British trench line, lost to the German advance during a heavy bombardment. Wendover died in Boulogne on 19th May and his body brought home by his family, a practice subsequently banned by the army.
The memorial, high up on the east wall of the church, comprises the sword, spurs and heraldic devices of the 20 year old viscount, with a brass plaque. Above these relics are a standard and trumpet with banner of the Blues. It must be unprecedented for a regiment to provide such important artefacts for a memorial. 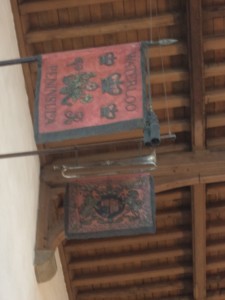 The Royal Horse Guards Standard and Trumpet over the memorial to Lieutenant Viscount Wendover in All Saints Church, High Wycombe, Buckinghamshire.

The dismounted attack by the three regiments of the brigade, the Royal Horse Guards, the 10th Hussars and the Essex Yeomanry, is described in the Essex Yeomanry history of the war: ‘At this moment a group of Germans fled from the positions they were holding, and someone holloaed, “Tally ho! Yonder they go.” As a response to the view holloa the whole line, the Essex on the right and the 10th Hussars on the left, rose as one and rushed the hill. The going was deep, but no one halted until the trench was reached as were also a series of holes which the line degenerated into on the right. Very heavy casualties were suffered in both regiments..’
The Royal Horse Guards attacked in the charge on the right of the Essex Yeomanry. Each of the three regiments lost around 10 officers and 150 other ranks in the charge. The commanding officers of the 10th Hussars and the Essex Yeomanry were killed.
In All Saints there is also a memorial to a VC from Wycombe Royal Grammar School, Lieutenant Frederick Youens, Durham Light Infantry, killed in 1917.
A surprising find in All Saints was a memorial to Captain Edward Kennedy RN, father of Ludovic Kennedy, who rejoined the Royal Navy in 1939 at the age of 60, and was in command of the converted liner HMS Rawalpindi off the Faroes, when Rawalpindi encountered the German battleships Scharnhorst and Gneisenau. Kennedy refused a demand to surrender and fought his ship until it was sunk by shellfire, going down with it.

On 27th July 1880 the British 66th Regiment was cut to pieces by Afghans at the Battle of Maiwand: http://www.britishbattles.com/second-afghan-war/maiwand.htm.
In 1881 the 66th became the 2nd Battalion, Princess Charlotte of Wales’s (Berkshire Regiment).

The Lion in Forbury Gardens, Reading, Berkshire, commemorating the losses of the 66th Regiment in Afghanistan during the Second Afghan War, particularly at the Battle of Maiwand, 27th July 1880.

The losses suffered by the 66th in Afghanistan are commemorated by a massive lion on a plinth, carved with the names of the dead, including the commanding officer, situated in Forbury Gardens in Reading, the county town of Berkshire.

The ‘Bugle’ pub in Reading, Berkshire.

The old 66th is also remembered in the ‘Bugle’ pub in Friar Street, Reading.
The pub sign shows a bugler of the 66th in the uniform worn by the regiment in Afghanistan in 1880. 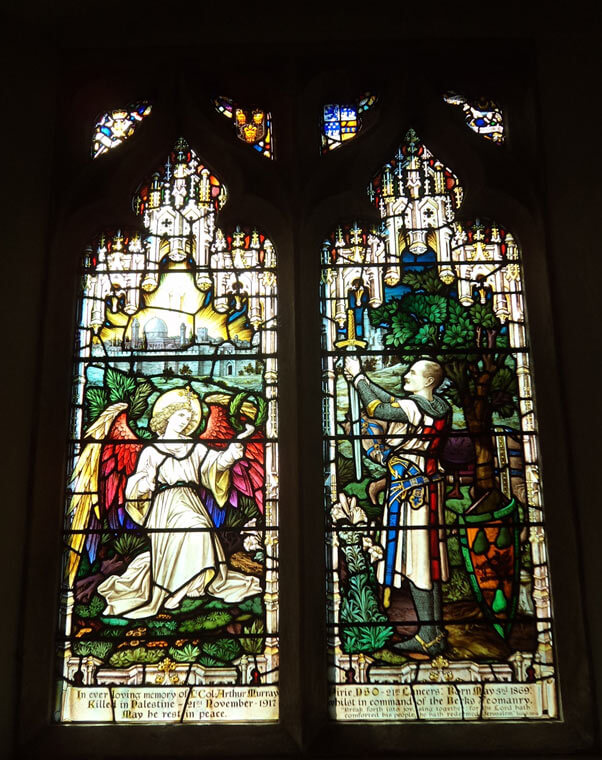